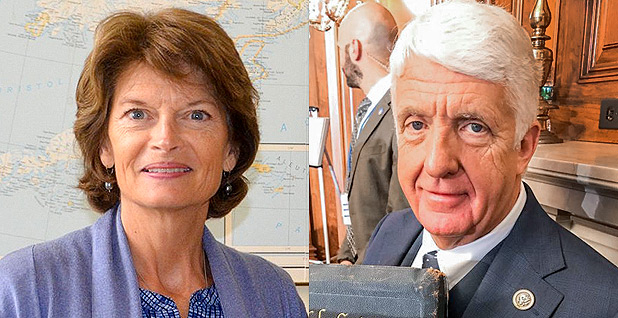 Key House and Senate lawmakers said yesterday they may look to revive components of last year’s unfinished energy bill in the coming months.

House Natural Resources Chairman Rob Bishop (R-Utah) told reporters he expects to see the committee "moving slowly out of the gate." The panel has yet to formally organize.

"I don’t expect you to see any subcommittee work from us before late February, early March," he said. "If we do anything early on, it may be some of the stuff that was passed last year and is left over."

That includes several elements of the energy reform package under his committee’s jurisdiction, including sportsmen’s legislation and provisions to ease the siting of transmission lines on federal lands.

The upcoming omnibus appropriations bill, as well as President-elect Donald Trump’s infrastructure package, could be vehicles for some of the leftovers, Bishop said.

House and Senate lawmakers went to conference last June to try to bridge the gap on competing energy reform bill visions, only to see the effort collapse before Christmas.

The House adjourned in December after rejecting pleas from Senate Energy and Natural Resources Chairwoman Lisa Murkowski (R-Alaska) and ranking member Maria Cantwell (D-Wash.) to put the agreed-to provisions on the floor for votes.

Murkowski said yesterday that she and Bishop discussed the possibility of reviving parts of the legislation last week during a phone call on other matters. Murkowski said she has also been informally checking with committee members to make sure she’s "still in sync with what they want to do."

"I’m mentioning my desires to get things going again with my energy bill," she told E&E News yesterday. "Will it be everything that was on the floor that last week? No. But will we try to do as much as we can to kind of clear out the closet here? Yeah."

Murkowski also listed the sportsmen’s package, along with public lands and nuclear provisions, as items that "can move through."

One proposal from the lengthy energy talks that ended up making it into law — legislation commemorating the National Park Service Centennial — could get another look, Bishop said.

"I would like to expand that slightly," he said.

However, lawmakers will likely revise some of the provisions crafted in order to win President Obama’s signature, possibly including the agreement to end the practice of wildfire borrowing.

"You’ve got a new administration coming in, and I’m not sure where they’re going to end up on the wildfire budgeting," Murkowski said, noting that she discussed the matter with Interior secretary nominee Ryan Zinke (R-Mont.).

The issue largely belongs to the Forest Service, however, and the lack of an Agriculture Department nominee means it’s unclear what the Trump administration’s position might be.

Bishop said he was holding off on talking policy with Zinke until the Senate confirms him. "It would be inappropriate," he said.

However, he said the incoming administration should review the string of national monuments Obama designated under the Antiquities Act.

The Congressional Review Act is probably not "a viable vehicle" for undoing monument designations, but Bishop said Trump could act executively to reverse them and the permanent withdrawal of federal offshore lands from drilling.

Rep. Joe Barton (R-Texas), vice chairman of the House Energy and Commerce Committee, said Chairman Greg Walden (R-Ore.) is meeting with subcommittee leaders and members to develop an agenda to be revealed in the coming weeks and months.

However, he noted that the panel is one of two in the House tasked with repealing Obama’s health care law, which is expected to be an early focus.

Barton cautioned that Walden and House leadership will set the agenda, but that new Energy Subcommittee Chairman Fred Upton (R-Mich.) may be interested in revisiting the unfinished energy bill from last year "and try to move something."

Environment Subcommittee Chairman John Shimkus (R-Ill.), Barton said, "would like to take a look at Yucca Mountain and the Clean Air Act," which is now under his jurisdiction.

Barton, who served as full committee chairman during the George W. Bush administration, said he had recommended that Walden take a broad look at the Clean Air Act.

"I want us to be as aggressive as is reasonably possible," he said. "We as conservatives … this is our best opportunity, better even than the Reagan years or the ‘[Newt] Gingrich Contract With America’ years. This is our best chance to really rebalance the equation.

"Not try to gut stuff, but try to bring these laws back to where they were in the beginning, which was most of them were pretty evenly balanced between regulation and markets, between opportunity and government mandates, and they’ve all been moved to the left by Obama."

Barton added that he expects Trump to waste no time in using his own authority to reverse Obama’s policies, including U.S. EPA’s Clean Power Plan.

"My understanding is the president is going to fairly quickly by executive order undo quite a bit of the Obama executive orders on the energy and environment front," he said, adding that he was hopeful it would happen on the first day of Trump’s presidency.

"How many executive orders can the president sign in a 24-hour period?" Barton asked, laughing. "He might set a new record."