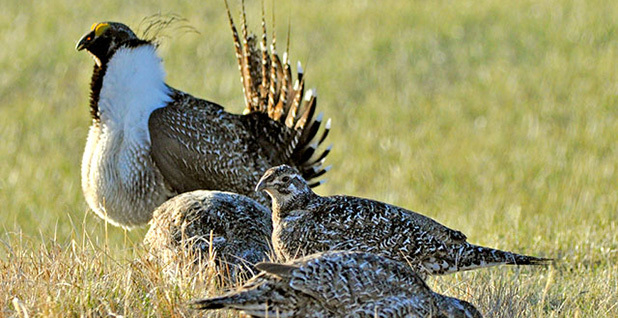 Interior Secretary Ryan Zinke, who has been a vocal critic of the Obama-era sage grouse plans, is set to sign a secretarial order this morning creating a review panel that will assess both federal- and state-level efforts to protect the birds and possibly recommend significant changes to how they are managed (Greenwire, June 7).

"A driving reason why I’m doing this secretarial order is there are some innovative ideas out there, and I want to make sure I give the states an opportunity to work with our team — which we have some of the best scientists in the world, the best wildlife specialists, the best land managers — and I don’t want to discount the states’ plans out of hand," Zinke said in a conference call with reporters last night. "I think we owe it to the states to evaluate it fairly and working together. I see it as a win-win."

Bishop told E&E News ahead of Zinke’s announcement that the review was "appropriate" and something that "should have been done a long time ago."

Following a yearslong process, the Interior and Agriculture departments finalized their greater sage grouse plans in 2015 including amendments and revisions to 98 Bureau of Land Management and Forest Service land-use plans.

But Bishop asserted a secretarial review "doesn’t solve the problem" unless "potential relitigation" is also addressed, referring to lawsuits that could crop up if the department tries to make administrative changes to the plans.

The conservation plan itself is also already the focus of numerous legal challenges by both the states of Utah and Nevada, and groups such as the Western Energy Alliance and North Dakota Petroleum Council, as well as mining companies and several counties in Nevada.

Legal experts have suggested it is unlikely that the Trump administration would simply stop defending those cases in court, however, because the lawsuits challenge various aspects of the federal government’s ability to regulate activities on federal land (Greenwire, Feb. 23).

Bishop also said legislation is needed. "For sage grouse to be solved, and for the state plans to be put into application, it’s going to require some kind of legislative fix," the chairman said. "It can’t be done administratively. You can move in that direction, you just can’t solve the entire problem administratively."

Ahead of Zinke’s announcement last night, House Natural Resources Committee ranking member Raúl Grijalva (D-Ariz.) said he had hoped that the Trump administration would not "undo" the commitments reached between state and federal governments.

"Whatever the secretary comes up with today, it’ll be a lessening of what is already on the books, which many of us thought that by agreeing to some settlement with states, we’d already weakened the act in itself," Grijalva added. "But having said that, any further diluting of that is something to be very, very concerned about in terms of what trends we’re going to see."

And, conservationists expressed disappointment with Zinke’s decision, particularly given the 60-day window he set for the process.

Under his order, a team of officials from the Bureau of Land Management, Fish and Wildlife Service and the U.S. Geological Survey will submit a report with recommendations following that period.

Sarah Greenberger, who as one of former Interior Secretary Sally Jewell’s top counselors who helped develop the sage grouse plans, criticized Zinke for "listening to one small segment of stakeholders" in issuing the review.

"When you turn your review into those plans that were supposed to be about habitat protection to whether we’ve placed any burdens on development, that’s concerning," said Greenberger, who is now vice president of conservation policy at the National Audubon Society.

She added: "This was supposed to be about choosing some places to protect so that there was more stability for development across the larger landscape."

Greenberger also challenged Zinke’s assertion that options such as captive breeding and population targets, as well as predator controls, have not been given proper weight and would be in the review.

"Those have been considered and the science lands pretty heavily that those aren’t the top concerns or the most successful approaches to conservation," she said.

The review will also examine both invasive weeds and rangeland fire as potential threats to the bird’s habitat, but Greenberg said those dangers must be considered in the context of disturbance and development.

Still, Greenberger said she remains hopeful that the Interior review process includes a "full range of stakeholders who’ve been invested at the national level and the state level in this process," including sportsmen and conservationists, as well as ranchers and energy developers.

Western states have pushed the Trump administration for greater flexibility in how the plans are implemented, including how federal plans align with state grouse strategies for oil and gas leasing near sensitive breeding grounds.

"If one state goes off or two or three and weaken their commitment or their obligation, then it’s the other states who pay. No one gets to walk away without impacting someone else," she said.

The Wilderness Society’s senior director for agency policy, Nada Culver, likewise questioned the need for the review, arguing the conservation plans were created to "include flexibility and an ongoing collaboration with the states."

The conservation effort was created in large part to avoid a decision by the Fish and Wildlife Service to list the bird under the Endangered Species Act, a move seen as likely to stifle economic development in the affected states. FWS is slated to revisit its decision in 2020.

"Secretary Zinke’s order is so disruptive because it undermines carefully balanced and negotiated plans against the advice of the stakeholders involved," Culver said. "The plans do not need to be revised, they need to be supported and implemented in good faith by the Department of the Interior."

She added: "Starting a review of the plans for managing greater sage grouse with a stated intent to further accommodate oil and gas development ignores the reality that the most critical grouse habitat does not overlap with the highest potential for oil and gas and ignores the consensus reached by state and federal agencies on the building blocks needed to conserve the species."