Bison calf dies after tourists put it in their car 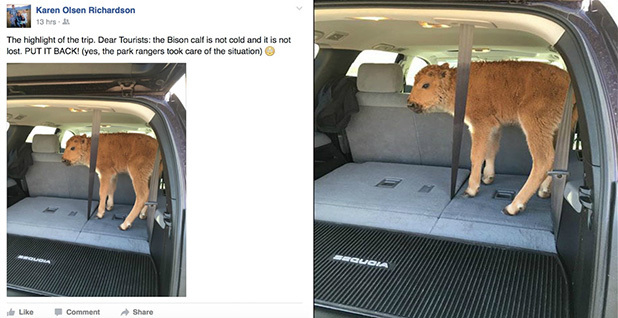 This Twitter photo from park visitor Karen Richardson went viral last week after tourists loaded a bison calf into their car because they thought it was cold. The calf was later rejected by its herd, and NPS euthanized it.

A newborn bison calf recently died after tourists picked it up in Yellowstone National Park and loaded it into their car over concerns that the animal was too cold.

The National Park Service announced today that it euthanized the calf because its herd abandoned it. The agency attributed that rejection to the interference of a father and son who drove the calf to a ranger station in their SUV.

"[P]ark rangers tried repeatedly to reunite the newborn bison calf with the herd. These efforts failed," NPS officials wrote in a press release today. "The bison calf was later euthanized because it was abandoned and causing a dangerous situation by continually approaching people and cars along the roadway."

NPS is using the situation to remind visitors to follow wildlife and safety regulations. In recent weeks, visitors to Yellowstone "have been engaging in inappropriate, dangerous, and illegal behavior with wildlife," according to the agency.

In April, for example, a video of a woman petting a bison went viral (Greenwire, April 21). Last year, five people were injured — three seriously — while taking photos of the animals within 3 to 6 feet of them.

The father and son, who were reportedly from another country, showed up at a ranger station with the calf in the back of their hatchback SUV. Karen Richardson, a parent who was chaperoning a field trip, told EastIdahoNews.com that the two were "seriously worried that the calf was freezing and dying."

"They sincerely thought they were doing a service and helping that calf by trying to save it from the cold," she said, according to the newspaper.

The tourists ended up putting the bison calf back, with the help of Yellowstone park rangers. But it was too late: The calf never became reattached to the herd.

"Approaching wild animals can drastically affect their well-being and, in this case, their survival," NPS officials said today. Park visitors are required to say at least 25 yards away from bison and other wildlife, and at least 100 yards away from bears and wolves.