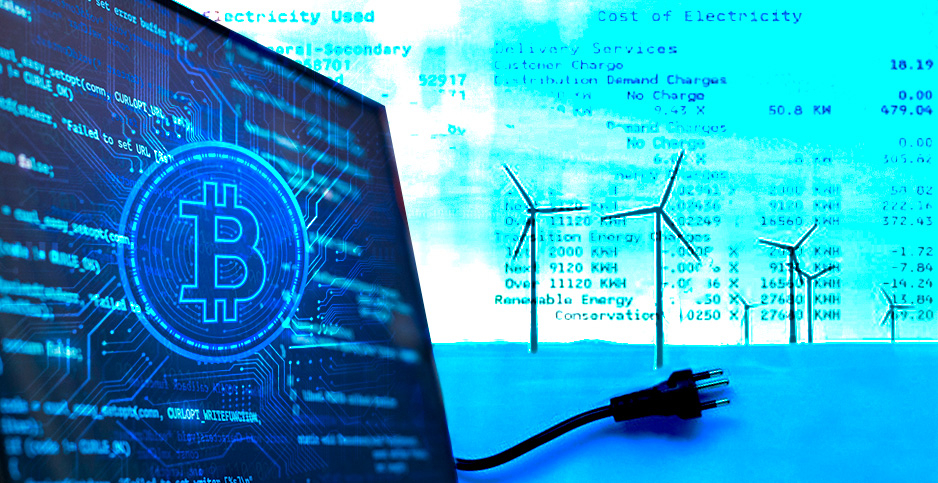 Bitcoin miners are trying to remake the cryptocurrency’s image as a climate villain, arguing that the digital currency could help crown renewable power as the grid’s top source.

At the same time, the energy-hungry practice is helping revive uneconomic coal plants in some states.

Love it or hate it, Bitcoin is set to make profound changes on the mix and distribution of electricity, with repercussions for emissions and consumer bills.

Bitcoin "mining," where computers gulp down electricity and grind out answers to mathematical puzzles in order to create the currency, emits about as much greenhouse gas as a small European country, according to some studies. That’s largely because mining operations tend to draw their power from coal-heavy grids in China.

The emissions footprint, paired with Bitcoin’s decentralized, Wild West ethos, has spurred critics from Bill Gates to Sen. Elizabeth Warren (D-Mass.), who attacked Bitcoin’s "devastating consequences for the climate" during a hearing this month.

Outside of energy policy circles, though, Bitcoin’s backers counter that the currency doesn’t have to be hamstrung by coal.

In the U.S., they argue, mining could be powered by low-carbon sources — and often is already. On average, about 63% of U.S. bitcoin mining operations’ electricity is from hydropower or another low-carbon source, according to the Cambridge Centre for Alternative Finance, although only about 8% of bitcoin processing originates in the U.S.

Some of the cryptocurrency’s proselytizers go even further, hinging the success of renewable industries on their embrace of mining for bitcoins.

One white paper commissioned by Square, a payment company with investments in Bitcoin and co-founded by Twitter’s Jack Dorsey, claimed that renewables could power 99% of the U.S. grid if paired with bitcoin mining, and just 40% if not.

Miners could do most of their work during the high-output hours of wind and solar or other renewables, then power down during other periods of the day, the white paper argues.

Few energy policy experts find it likely for that strategy to produce a nearly 100% renewable grid, however. And some doubt whether it would catch on at all with bitcoin miners.

"Typically miners are running their machines 24/7," said Arman Shehabi, an energy technologies researcher at Lawrence Berkeley National Laboratory. "If they were set up in a place where they had to turn them off for part of the day, there’d have to be some pretty strong price signals to encourage them."

Cheap electricity also tends to be far more important to miners’ bottom lines than for a typical large corporation, he said.

That economic fact, combined with the global, decentralized nature of Bitcoin transactions, does much to explain why China has hosted so much of the mining, he said. About 77% of the globe’s computing power necessary for mining is located there now, according to the Cambridge Centre for Alternative Finance, and some estimates say that about 40% comes from coal-dependent regions.

Questions about environmental impacts haven’t stopped Bitcoin’s value from surging over the past year, from roughly $9,000 last June to over $30,000 as of yesterday afternoon. Large retailers from Visa to Starbucks have started accepting bitcoins for certain purchases, and in February, Tesla Inc. said it would take the currency as payment for its cars. Earlier this month, the country of El Salvador deemed it valid tender.

As Bitcoin drifts into the mainstream, miners are taking renewed notice of their currency’s environmental reputation.

Some, like the eight-company Bitcoin Mining Council (BMC) — which launched in May and consists of Bitcoin companies — are seeking explicitly to reshape the public narrative.

The BMC came together after Tesla’s Elon Musk backed off in May from accepting bitcoins, citing the currency’s "great cost to the environment" and causing the value to plunge. He later reversed stance, suggesting last week Tesla might accept bitcoins if clean energy were to fuel at least half of its mining.

The council’s members say they plan to share information about Bitcoin’s energy use, their own commitments to carbon neutrality and progress toward those commitments.

"The sole purpose of the council is really to help educate the general market," said Fred Thiel, CEO of miner Marathon Digital Holdings, one of North America’s largest bitcoin miners.

Musk joined an initial meeting for the council, of which he later tweeted approvingly, but won’t have a role, according to members.

Another voluntary initiative spearheaded in April by decarbonization advocates, known as the Crypto Climate Accord, intends to link 100% of its bitcoin-mining members’ energy usage to carbon-free power by 2030.

Bitcoin’s explosion in value, and the subsequent scrutiny of its emissions, sparked interest from miners in joining the accord, said Jesse Morris, chief commercial officer of the Energy Web Foundation, a nonprofit that promotes decarbonization through blockchain and other open-source technologies. The group is one of the initiative’s three organizers, along with clean energy advocates at RMI and the Alliance for Innovative Regulation.

As recently as last year, said Morris, "we were shouting into the void." That changed in 2021. "I think the reason we have traction is, look at the price of bitcoin."

‘A bad thing all around’

But as bitcoins’ value rises, critics are reviving accusations that the currency acts as a drag on climate action — and contributes little of practical value to the world, unlike other sources of emissions.

One study, published in Nature Climate Change in 2018, concluded that if Bitcoin caught on like other major technological innovations like credit cards or the Internet, its emissions alone would warm the planet by over 2 degrees Celsius within three decades.

"You can make a lot of money, I don’t deny that. But it’s just a bad thing all around," said Camilo Mora, lead author and associate professor of geography and environment at the University of Hawaii, Manoa.

"We’ve been working on climate change as a community for 30 years already. I get frustrated when instead of moving forward, we move backward," he added.

Bitcoin’s power consumption is lower than that of industries like steel and concrete, and about half that of traditional data centers, as some defenders are fond of pointing out.

Mora said the difference is that the cryptocurrency doesn’t appear to "improve the quality of humanity" the way other widely adopted technologies did. "I just can’t see any significant purpose on this thing," he said of Bitcoin.

Few people within the renewable energy industries are ready to debate Bitcoin’s societal merits, at least in public. The largest trade groups for wind, solar and energy storage declined to comment or did not respond to inquiries, along with the Renewable Energy Buyers Alliance and several national environmentalist groups.

Similarly, Morris of the Energy Web Foundation said that "we’re not engaged in that," regarding the question of Bitcoin’s usefulness. "Our assumption is that these cryptocurrencies are just going to be here," Morris said.

Most miners are new to the concept of carbon management.

The Crypto Climate Accord says improving transparency about miners’ emissions is a good place to start. It’s building open-source software that could track energy consumption at its members’ mining facilities. Matched up to utilities’ own records of power generation, the software could be used to prove how CO2-intensive the mining center’s power really is.

The idea is to present a public-facing version of what Google and Microsoft are doing, in their around-the-clock aligning of energy consumption with the grid’s concentration of zero-carbon electricity.

"That’s all we’re doing here, but applying it to mining," said Morris. Opening the info up to the public would give miners an edge in transparency. "When Google and Microsoft make these claims [of carbon-free energy], who do we have to trust? Google and Microsoft."

Coal ‘coming back from the dead?’

As the renewable debate continues, bitcoin operations are already starting to change the distribution and mix of electricity at the state level.

In hydropower-rich New York and Washington state, the arrival of miners has caused local utilities to stop selling excess power into Canada, increasing bills for locals. In 2018, one municipality in New York responded with a temporary moratorium on new bitcoin mining operations.

Lawmakers in New York’s state Senate also passed a bill, during the recently finalized legislative session, that called for a pause on new bitcoin mining, after such an operation helped relaunch a retired coal plant that had been converted to natural gas. The bill failed to advance in the state Assembly.

Environmentalists and officials who want to pause mining say they are concerned that a proliferation of bitcoin mining will make it harder for the state to meet its climate goals, which include the direct reduction — not counting offsets — of 85% of all greenhouse gas emissions by 2050.

One solution floated by environmentalists at Earthjustice would force miners to source their power from renewables or fund new renewable generation, so as to preserve supplies for the grid.

"Cryptocurrency is real and increasingly important, and dirty power plants are coming back from the dead," said Mandy DeRoche, an attorney at environmentalist Earthjustice, in a press release this month.

Activists think upward of 30 upstate fossil fuel plants could face a similar fate. A separate coal plant in Montana has also staged a Bitcoin-based revival, after partnering with Thiel’s Marathon Digital, for example.

The plant, Hardin Generating Station, was close to shuttering in 2018. Last year, its new owners said it would produce some 105 megawatts of power for Marathon’s mining operations.

Both the New York and Montana plants say their mining is carbon-neutral or will be eventually. And Thiel says Marathon is interested in pursuing agreements with clean energy generators to take excess power — much like the Square white paper suggests.

During times when renewable generators have to otherwise curtail production, said Thiel, "we could be paid to take the power … and other times, instead of taking power, we’d let it go to the grid. That’d be if we partnered with a generator."

Officials in other states are actively courting bitcoin miners. Kentucky’s Legislature revised clean energy facilities’ tax credits this spring so that cryptocurrency miners could claim them. And in Florida, Miami Mayor Francis Suarez has embarked on a campaign to lure the miners.

"We get nuclear power, so we have a clean energy supply that’s essentially unlimited," said Suarez in a March interview with cryptocurrency journalist Laura Shin, adding that solar and hydrogen could one day power mining and other data centers.

Asked how to reconcile bitcoin mining with its environmental impact, Suarez replied that more of it should be done in the United States. "By and large, we produce clean energy. So that would change that narrative and that dynamic."

Suarez’s office did not respond to E&E News inquiries.