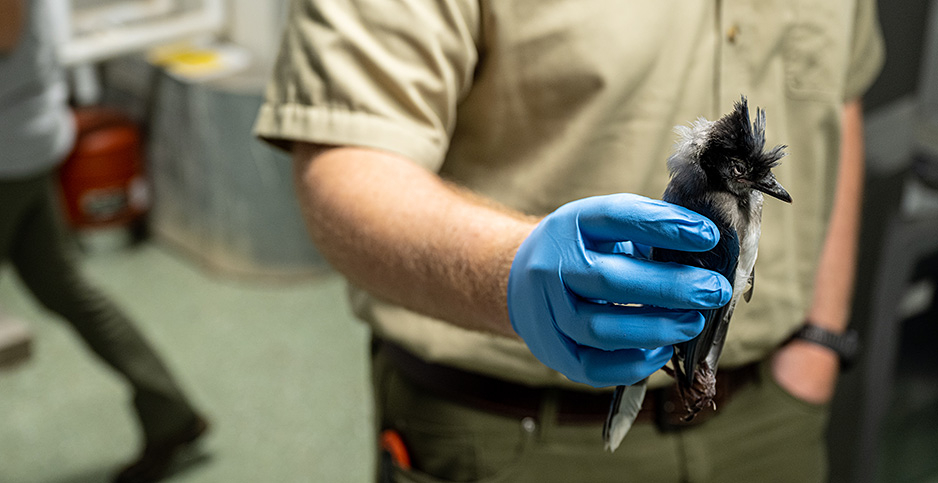 Michael Patton, an avian biologist, is seen carrying an immature blue jay carcass at the Kentucky Department of Fish and Wildlife Resources' headquarters. Animal health experts are investigating reports of sick birds and are unsure of the cause. Jon Cherry/Getty Images

A mystery illness killing songbirds has spread from the Mid-Atlantic to the Midwest in just months, and wildlife managers are still struggling to find the source.

Since then, state officials in Delaware, New Jersey, Pennsylvania, Ohio and Indiana have received similar reports of sick songbirds, triggering a multiagency effort to track and test symptomatic birds, according to the U.S. Geological Survey.

Theories about what’s killing the songbirds abound, from a transmissible disease to a toxin tied to the Brood X cohort of cicadas. Officials have ruled out salmonella, chlamydia, avian influenza, West Nile virus and other common bird diseases. But the bizarre mixture of symptoms continues to stump officials and ornithologists alike.

In Indiana alone, the state Department of Natural Resources has documented 285 cases.

"These birds have neurological problems like tremors, disorientation, uncontrollable limbs and behaviors that indicate swelling of the head — for example, they would have their heads look as if they weighed too much," Allisyn-Marie Gillet, state ornithologist for Indiana’s DNR, said at a news conference Friday.

Some ornithologists think the birds could be suffering from a toxin they ingested from feeding on the latest batch of cicadas, which were abundant in areas at the time when birds began to fall ill.

One theory, according to Anna Pidgeon, a professor of forest and wildlife ecology at the University of Wisconsin, Madison, is that the cicadas picked up toxins from tree roots during their 17-year stint underground, which was biomagnified in bug-eating birds as they fed on the bugs.

Some also think birds picked up toxins related to pesticides from people spraying their yards to ward off cicada invasions.

"These neurological problems are usually related to toxins biomagnifying in their bodies, resulting in problems like blindness and extra tissues growth around the eyes like it seems we’re seeing," Pidgeon said. "It’s just one theory; they still have a lot more testing to do."

What is confusing about this illness is the bizarre mixture of symptoms, Pidgeon said.

The cicada-caused toxin theory doesn’t account for the eye-related symptoms, which are usually associated with diseases that are transmitted from bird to bird, like avian pox.

"But then it’s also interesting that most of those normal disease pathogens haven’t been detected," she added. "It’s hitting a lot of birds that are non-migrant species that nest early. Those birds could just be more easily detectable, or it could be a pattern — it doesn’t seem like they know yet."

Gillet of Indiana’s DNR said investigators are still working with agencies of all the states affected plus federal agencies like USGS and the National Park Service to run more tests. For now, she said, the illness hasn’t spread to humans or livestock.

"I like to compare it to trying to find an unknown object in a haystack," she said at Friday’s news conference. "I want to say ‘needle in a haystack,’ but we don’t even know what that needle looks like."

Officials in states neighboring Indiana, like Illinois and Michigan, have not had any confirmed reports of the illness.

There have been some reports of young songbirds with crusting or swollen eyes in Wisconsin, but they have not been confirmed to have the illness, according to Lindsey Long of Wisconsin’s Department of Natural Resources. The agency is sending the birds to the National Wildlife Health Center for further investigation.

"Identifying a source responsible for the cause of clinical signs in animals can be a long process in any situation," Long said. "And with wildlife, we may have less background information."

As a precaution, neighboring states are advising residents to take down bird feeders and birdbaths to keep sick birds from congregating and potentially spreading the illness — an avian social-distancing measure that other affected states have already adopted.

Although Gillet said wildlife officials are still unsure whether the illness is contagious, she added that typically bird diseases take a few years to spread from coast to coast after discovery.

Pidgeon added that she wouldn’t be surprised if the illness hit songbirds in Wisconsin soon.

"If it’s something that transmissible, it could definitely continue to travel," she said. "I haven’t seen any hard evidence of it here, but that doesn’t mean it’s not here. It all relies on reports of people seeing it — we just don’t know."