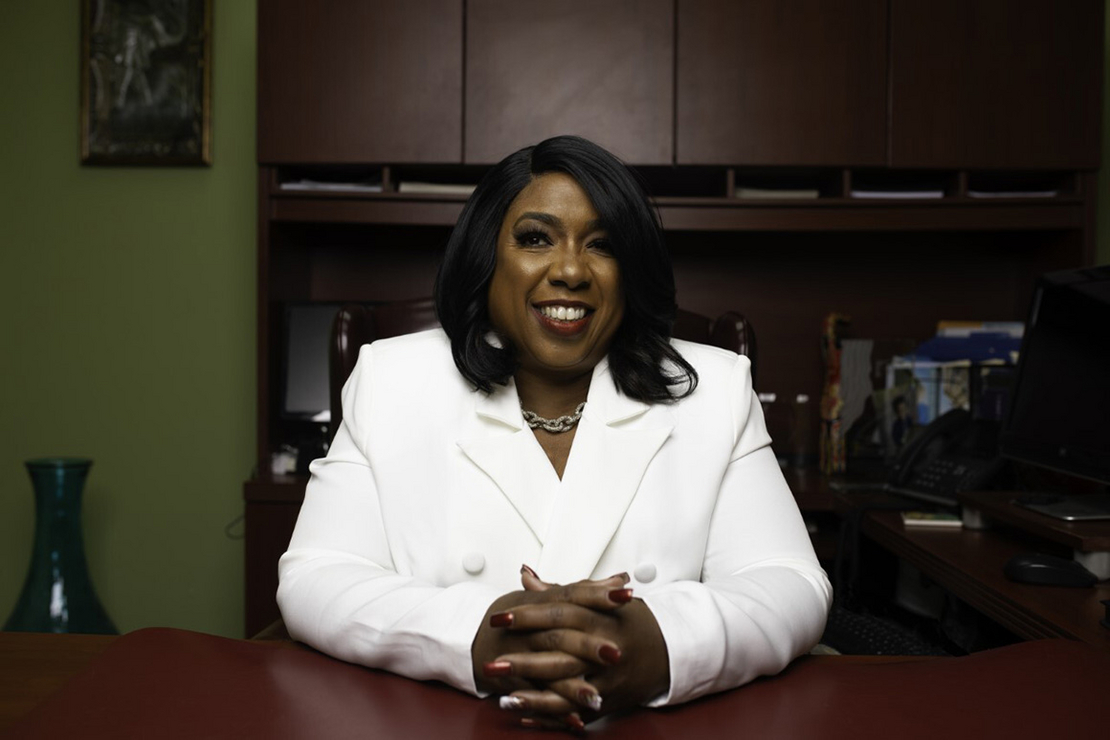 UNIONDALE, N.Y. — Deidre Helberg wandered the conference hall, past booths occupied by construction companies, shipping firms and cable manufacturers, and wondered where she fit in.

Like most people here, Helberg was drawn to the trade show by the prospect of supplying equipment to an offshore wind project planned off Long Island. But unlike most of the people here, Helberg is Black. She is used to this; after nearly two decades of running a business that sells electrical equipment to utilities, transit authorities and universities, Helberg, 60, is accustomed to being the only Black woman in the room.

“I don’t even really exist,” she said, looking at the mostly white faces milling around a nondescript conference room at a local Marriott hotel.

Now, she hopes offshore wind will expand her business and enable her to train a new generation of Black entrepreneurs in the power business.

“I tell people all the time, ‘If you are involved in climate change and want to help the planet, you have to really understand that this is about humanity,’” Helberg said. “When you say ‘diversity and inclusion and justice,’ that includes everybody, all of us as human beings. And so it’s just opening up the door for careers, jobs training and a new industry that really is not new.”

Whether businesspeople such as Helberg can land work in offshore wind is a crucial test for the industry as it prepares to embark on a building boom along the Atlantic seaboard.

President Joe Biden and northeastern governors have sold offshore wind as a way to green the power sector and create jobs, particularly in communities of color. They argue it amounts to a one-two punch, offering an economic ladder for workers while cutting down on air pollution from power plants in Black and Brown communities (Climatewire, Oct. 13, 2021).

But renewable energy has a mixed track record when it comes to creating work for people of color. The percentage of Latino and Asian people who work in the wind industry eclipse their numbers in the national workforce, according to the Department of Energy. Black people, by contrast, accounted for 7 percent of the wind workforce in 2020, lagging their 12 percent average in the national workforce. (Onshore wind accounts for almost all wind industry employment in the United States. The Energy Department does not break out demographic data for the fledgling offshore sector.)

“As an advocate, this is one of the main reasons we say climate justice is racial justice is energy justice,” said Raya Salter, a consultant who works on environmental justice issues in New York. “To get at the root causes of energy inequity, environmental injustice — that is the work we need to do.”

Offshore wind is a pillar of the U.S. climate strategy. Biden has set a goal of installing 30 gigawatts of offshore wind capacity by 2030, enough to power 10 million homes and cut emissions by 78 million tons annually. Siting turbines in the ocean is particularly important for the densely populated Northeast, where there’s scarce open space for large-scale renewable energy projects.

Biden, along with northeastern governors and offshore wind developers, has placed an emphasis on creating a diverse workforce. The Biden administration’s Justice40 initiative aims to direct 40 percent of all climate investments to disadvantaged communities. It echoes a New York law that requires the state to direct at least 35 percent of clean energy and energy efficiency spending to areas that tend to be poor and polluted.

New York contracts with offshore wind companies give preference to developers that commit to working with minority- and women-owned businesses. The state energy department is also investing $120 million in workforce training focused on underserved communities and priority populations, which include low-income households, people with disabilities and those who were previously incarcerated, said Aron Ashrafioun, a spokesperson for the New York State Energy Research and Development Authority.

“It has long been the policy of New York State to maximize opportunities for the participation of the state’s business enterprises, including minority- and women-owned business enterprises (MWBEs) as bidders, subcontractors, and suppliers on its procurement contract,” Ashrafioun wrote in an email.

Yet challenges remain. While New York gives preference to offshore wind developers that commit to working with minorities and women, there is no formal requirement that they do so. The state also runs a program designed to connect large companies with businesses run by people of color. But many entrepreneurs struggle with the certification process, which can take two years, said Helberg, who also leads the U.S. Coalition of Black Women Businesses, a nonprofit that advocates for Black female entrepreneurs.

The delay can be costly when it comes to offshore wind, as developers rush to line up suppliers and vendors for their projects. She worries that the lag will lead offshore wind companies to claim they can’t find minority- or women-owned companies to work with. Helberg has heard similar excuses over her career.

‘Not going to be easy’

Both the promise and challenges facing offshore wind were on display in November, when local contractors and businesses from across the New York City metro area descended on a supply chain forum for Sunrise Wind. The 94-turbine project will be built in waters between Long Island and Martha’s Vineyard in the coming years, making it one of the larger developments planned along the East Coast.

The forum was intended to connect local contractors with large suppliers hired by the two companies building the project: Ørsted A/S, the Danish wind developer, and Eversource Energy Corp., a New England utility.

A smattering of Black, Latino and Asian contractors and businesspeople were in the crowd, listening to officials from Ørsted and Eversource describe the kind of equipment and services they need.

A representative with the Korean cable-maker LS Cable & System told the crowd that the company is looking for local logistics firms to help transport its transmission line when it arrives in the United States.

Once the offshore wind project becomes operational, Ørsted officials said they will need a bevy of people to support their operations on land, ranging from IT systems and waste management to maintaining forklifts and buildings.

Company representatives stressed their efforts to engage a diverse group of businesspeople, but they acknowledged that it can be a challenge. Each aspect of the project — from installing the turbines and substation in the ocean to laying transmission cables on land — is a major infrastructure project in its own right, said Michael McMahon, an Ørsted supply chain manager.

That can make it difficult for smaller companies to know where they fit in, especially in a new industry. Even knowing who to contact can be difficult. The solution, in many cases, amounts to basic networking, he said.

“There’s people in the room that I’ve sat down with and tried to try to make the industry a little bit clearer and then focus and say, these are the vendors to talk to and, in many cases, point them to an individual,” McMahon told the gathering.

Later, McMahon walked around the conference room with Clifford Exil, an HVAC installer from Brooklyn. He introduced Exil, who’s Black, to vendors at various booths, giving Exil a chance to ask contractors about their needs and pitch his services.

A former army combat engineer, Exil, 43, worked for six years at JPMorgan Chase & Co. before giving up banking for the trades. Office work, he said, had less appeal than being in the field.

Offshore wind’s success in Europe shows how promising the industry could be in the United States, he said, noting that Ørsted’s facilities will need the sort of HVAC systems he can install.

Exil called the industry “a big game changer,” adding, “this is not a new technology. It is not a new industry. If you look overseas, they got people retired from this industry. This is a no brainer to me. I’m going to get as many people as I know involved in this.”

But actually breaking into the industry can be a challenge. Many of the companies competing for contracts with Sunrise Wind are large, with teams of people who are focused on building relationships with offshore wind developers. They can also provide a variety of the services that companies such as Ørsted and Eversource need, cutting down on the number of contractors that they would work with.

He added: “I’m realistic. It’s not going to be easy, but it’s possible for sure.”

Helberg echoed that sentiment. Her hope is that offshore wind companies will buy transformers, arresters and other electrical equipment from her business. The developers seem to be making a real effort to work with people of color, but they face bureaucratic hurdles and the legacy of entrenched bias in American society, she said.

Many industries are happy to promote Black women in marketing material, she added. But jobs are what is really needed for those women. That would pave the way for a new, more diverse generation, ensuring that Helberg isn’t the only Black face in the crowd.

“You got to scale a person like me up so I can scale them up,” she said. “It’s just as simple as that.”