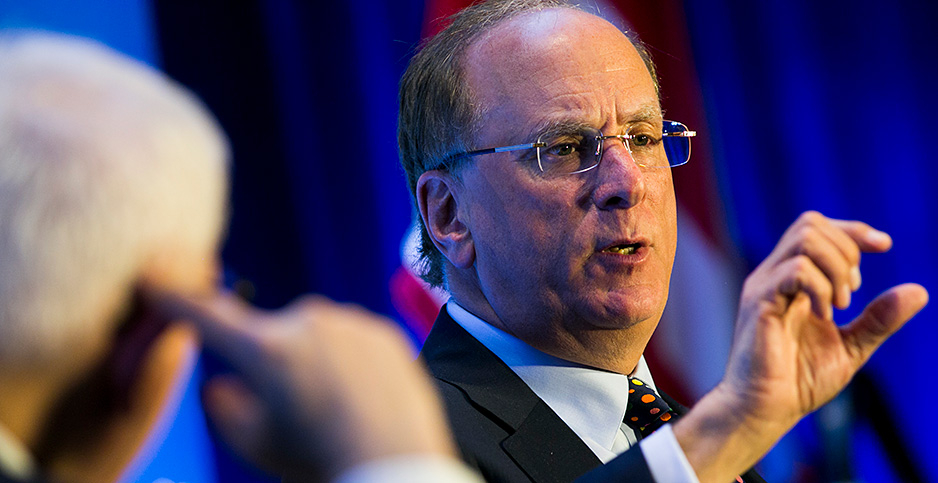 BlackRock Inc. CEO Larry Fink. The financial firm this week outlined its plan to encourage more climate action from the companies in which it invests. Kris Tripplaar/Sipa USA/Newscom

Wealth leviathan BlackRock Inc. gave teeth to its climate commitments this week when it pledged to leverage its shareholder power to punish companies that fail to take climate change seriously.

That promise sends a message to the heaviest greenhouse gas emitters: Set targets to cut carbon or risk retribution from the world’s largest asset manager.

At issue is a memo BlackRock released Tuesday saying directors of companies in which it invests must have sufficient "climate fluency." It also said corporations must forge and disclose their short-, medium- and long-term plans to reach net-zero carbon emissions by 2050.

The more detailed expectations are part of BlackRock’s pledge last month to achieve net-zero emissions itself — a feat that will require grappling with the climate impact of its $8.7 trillion investment portfolio (Greenwire, Jan. 26).

When companies don’t voluntarily meet BlackRock’s new standards, the firm said, it’s prepared to throw its weight behind shareholder proposals to force them to do it. The money manager also threatened to vote against the reelection of company directors who remain unwilling to address their companies’ contributions — and vulnerabilities — to global warming.

"We view this as the appropriate escalation where we see a lack of urgency and progress in a company’s actions around climate risk," the firm said.

BlackRock CEO Larry Fink doubled down on that point yesterday during a virtual summit hosted by the Institute of International Finance. "If we’re going to do this, if net-zero is really going to be the objective of our economy, it has to be done completely and thoroughly across the entire economy," he said.

BlackRock’s move signals a major departure from its former approach to shareholder engagement.

According to Tim Buckley, who directs energy finance studies at the Institute for Energy Economics and Financial Analysis, as recently as three years ago, Fink’s go-to line was that "he only manages the money; he doesn’t tell the boards how to run their companies."

Indeed, in 2019, BlackRock voted with company management on directors in high-carbon industries 99% of the time, according to a report by advocacy group Majority Action.

And between 2014 and 2019, the firm supported just 3% of social and environmental proposals filed at companies, a Morningstar analysis found.

In Buckley’s eyes, Fink’s more recent moves make clear that he intends to end the hands-off approach. "He has drunk the Kool-Aid, and he’s realized it’s entirely in BlackRock’s interest to get ahead of this curve," Buckley said.

That has significant implications for companies that have yet to align their business plans with the Paris Agreement or fail to appoint board members who understand the economic implications of climate change.

According to recent research, those companies abound. When New York University business and society professor Tensie Whelan surveyed 100 top U.S. firms, she found that just three out of the 1,188 corporate directors had climate expertise.

"That shows a lack of understanding of how material this issue is for most industries today," Whelan said in an interview.

"BlackRock owns a percentage of virtually all public market companies," she added, "so when they put forward a very specific set of questions that they’re going to be holding companies accountable to, I think companies do have to pay attention."

BlackRock began its work on the issue last year, when, according to the firm’s sustainability report, it voted against directors or management at 53 companies that the firm deemed climate laggards.

The firm also put 191 other companies "on watch" for making "insufficient progress on climate change" and said it would monitor their climate efforts over the coming months (Climatewire, July 15, 2020).

In the eyes of Boston University professor Madison Condon, who specializes in environmental law, the firm’s new expectations signal to heavy emitters that the financial superpower isn’t messing around.

"Will this be the year that a bunch of board members actually get ousted from the board because companies have failed to make progress on climate?" Condon asked. "I don’t know."

But she added that BlackRock is clearly willing to vote against directors — and has indicated it’s keeping a watchful eye on nearly 200 other companies.

With the 2021 shareholder season around the corner, Condon said, "I bet those boards are wondering if they’re [going] to keep their jobs."

To be sure, the corporate response to Fink’s expectations — and BlackRock’s enforcement of them — will vary between companies and sectors.

University of Texas law professor David Spence, who specializes in energy regulation, noted that major oil and gas companies like Exxon Mobil Corp. and Chevron Corp. have been fielding climate-related pressures for years. So he thinks it’s unlikely BlackRock’s intensified expectations will force significant change ahead of the majors’ annual meetings this spring.

But other companies, he said, "for whom the issue hasn’t been as front burner, and for whom BlackRock exerts a lot of influence over a significant percentage of their stockholders, yeah, this might shake up their preparations for the shareholder meeting."

Whelan agreed. She said an oil and gas company would likely respond differently than a large retail company, whose carbon footprint is largely associated with its supply chain.

But in general, she said, "with this letter in hand, boards of directors and the C-suite should at the very least be able to cite what their plan is for assessing climate risk … and building the low-carbon transition into their business strategy."

While BlackRock’s net-zero goal and new set of corporate expectations are significant, sources say the U.S.-based asset manager’s green shift is just one piece of a much larger puzzle.

Boston University’s Condon emphasized that companies’ climate plans and vulnerabilities ultimately need to be disclosed to — and audited by — government authorities, not just a major asset manager or other private-sector initiatives.

"In the past, when oil and gas companies have voluntarily reported scenario analysis, they have manipulated them to be favorable to their own future," Condon said. So "there’s still going to be a gap until the regulators step in, until these are subject to liability and securities fraud," she added.

Others remain adamant that robust, climate-related information and private-sector pressure could power much of the transition to a low-carbon economy on their own. Fink is among them; he said yesterday that he believes global capital markets will be at the "nexus" of the climate fight.

James Leaton, senior vice president at Moody’s Investors Service, noted in an email that investor engagement on climate issues has been building for years and has moved beyond requiring climate-related disclosures to demanding decarbonization. That’s led to rising numbers of net-zero commitments, which are "already impacting credit quality in sectors like autos and utilities where we expect decisions made now to be playing out in a carbon-constrained future," he said.

In Buckley’s eyes, it all sends a clear message to companies in planet-warming sectors: "Pivot or die."