BlackRock tallied its climate impact. Here’s what it found 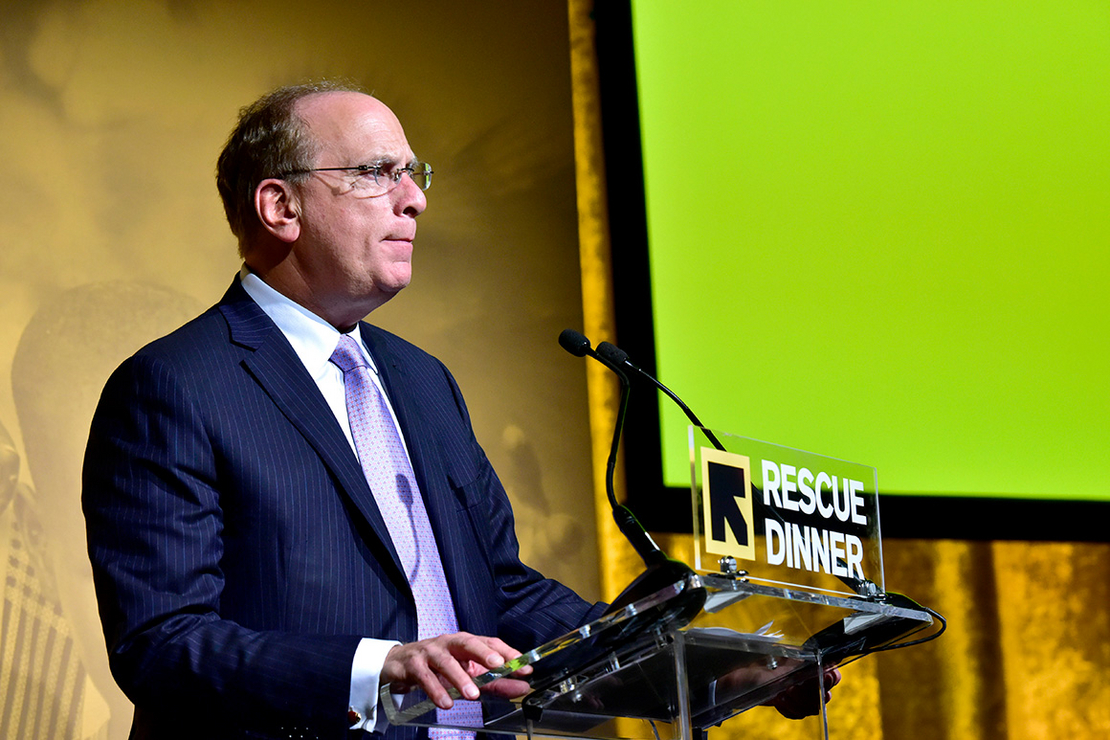 BlackRock Inc. CEO Larry Fink speaking at an event in 2018. The Wall Street giant has disclosed the greenhouse gas emissions associated with its investments. Eugene Gologursky/Getty Images for IRC

Wall Street titan BlackRock Inc. in 2020 helped pump more than 330 million tons of greenhouse gases into the atmosphere — the equivalent of 71 million passenger vehicles driven for one year.

Those eye-popping figures don’t come from environmentalists; they’re from the investment firm itself. The world’s largest money manager disclosed last month the planet-warming emissions associated with a majority of its investment portfolio — marking a first for BlackRock and also Wall Street more broadly.

As the financial sector faces pressure to slash its carbon footprint, banks, investors and other institutions have said they first would need to quantify their current levels of carbon emissions.

Doing so is challenging for a range of reasons. Key among them is that determining “financed emissions” requires a complex calculation: the carbon output that results from a firm’s investments in, and loans to, companies in every sector across the economy.

BlackRock, which today controls more than $10 trillion in assets, committed to achieve the herculean task less than a year ago. The firm said its resulting analysis, which is the first of its kind from a major U.S. money manager, provides “preliminary estimates” of the absolute emissions associated with more than 65 percent of its investment portfolio in both 2019 and 2020.

“That’s a lot of work very quickly. And I think that sort of shows the world this can be done,” said Ivan Frishberg, the chief sustainability officer at Amalgamated Bank.

“Now, we have small institutions [and] the world’s largest institutions all doing this, and some of them doing this very quickly. There isn’t any reason why any institution that’s committed to this shouldn’t be starting to” act, Frishberg added. He serves as a regional chair of the Partnership for Carbon Accounting Financials (PCAF), a global coalition of finance firms working to forge a standard financed emissions methodology (Climatewire, March 31, 2021).

BlackRock used the PCAF methodology to conduct its analysis. Other firms, including Bank of America Corp., Citigroup Inc. and Morgan Stanley have committed to do the same, but at least so far, Citigroup is the only other major U.S. institution to release preliminary results. The investment bank’s assessment was published last month and only covered its clients in the power and energy sectors.

While BlackRock’s report is a major step forward, it doesn’t provide a complete picture of the firm’s contributions to rising temperatures. The analysis, which was done using emissions data from index provider MSCI Inc., only encapsulates a portion of the firm’s business — and required significant levels of estimation.

But the assessment does provide a valuable snapshot. According to the report, the firm’s real estate and corporate securities assets, which make up roughly 65 percent of its assets under management, emitted at least 344 million tons of planet-warming gases into the atmosphere in 2019, and 330 million tons in 2020.

“This TCFD report marks the first time that BlackRock is reporting preliminary estimates reflecting the absolute emissions and the carbon footprint associated with the investments BlackRock makes on behalf of its clients in corporate securities and real estate (where data is available),” the document says.

Observers say that caveat — “where data is available” — is one of the report’s most crucial takeaways.

BlackRock emphasized throughout its analysis that the firm, like its peers, faced a range of obstacles as it worked to calculate its financed emissions for the first time.

Doing so accurately requires obtaining granular data about the emissions of every company the firm invests in. While a growing number of companies measure and report that information, many others do not.

As a result, firms including MSCI have to estimate companies’ emissions where corporate disclosure falls short, a wrinkle that BlackRock said “reduces the reliability” of its analysis.

A BlackRock spokesperson said in an email the company is hopeful that issue in particular will improve as more companies report their climate risks and impacts amid mounting pressure from investors and regulators.

Data quality and availability wasn’t BlackRock’s only challenge. The company also listed five other roadblocks, including that it excluded roughly 35 percent of its investment portfolio from the analysis due to poor data quality and a lack of methodologies that have been established to guide the process.

BlackRock also noted the results could have been affected by the Covid-19 pandemic, which drove down global emissions in 2020, as well as market volatility — both of which were difficult to account for.

Those are major limitations. But in the eyes of Ben Cushing, who leads the Sierra Club’s finance campaign, they also make BlackRock’s report even more important.

“It’s not a comprehensive number. As they say, it only covers about 65 percent of their [assets under management],” Cushing said. “So if this is the minimum baseline, the real number is actually quite a bit higher.”

That reality, he added, “hopefully sends a really clear signal to financial regulators that they need to act on this issue immediately.”

The report comes as the Securities and Exchange Commission works toward proposing new rules that would require companies to be more transparent about their climate risks, decarbonization goals and progress.

While it’s too soon to say how those rules will take shape, climate finance proponents have pushed the agency to require companies, including finance firms, to disclose the emissions associated with their operations, electricity use and supply chains. For asset managers such as BlackRock, that would include their Scope 3 emissions, or the carbon output associated with their entire investment portfolios.

“Until the whole corporate ecosystem, issuers and financers, have to start disclosing Scope 3 in a consistent way, voluntary driven disclosure will always be at some level hamstrung by data,” he said. “Particularly so for asset managers.”