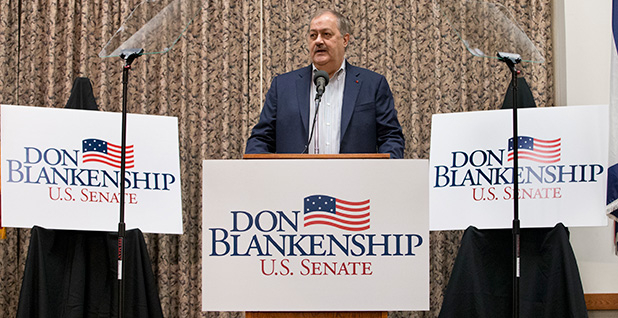 Former coal executive Don Blankenship sued "the mainstream media and much of the political establishment" yesterday for conspiring against his failed Senate bid in West Virginia.

The former Massey Energy Co. CEO, who served a year in prison over mine safety violations, took to Facebook to announce the lawsuit filed yesterday in a Mingo County, W.Va., court.

"At its core, the lawsuit is a defamation claim but broadly, it comes down to the swamp and mainstream media colluding to interfere in the 2018 United States Senate election right here in West Virginia," he said.

More than 75 news companies, political organizations, media personalities and reporters are listed on the complaint. In all, Blankenship wants $12 billion in damages — $2 billion for lost business and $10 billion to punish "outrageous conduct."

CNN, MSNBC, the Associated Press and The Washington Post are named, but Blankenship, who ran as a Republican before trying to mount a third-party candidacy, does not spare his former party or conservative media outlets, suing the National Republican Senatorial Committee, Breitbart News Network and Fox News.

Blankenship lost to West Virginia Attorney General Patrick Morrisey in the GOP primary last year but managed to win 20 percent of the vote despite national Republicans rallying against his candidacy with attack ads calling him a "convicted criminal."

"McConnell set in motion the wheels of a clandestine campaign … to destroy Mr. Blankenship and blatantly interfere in a federal election," the lawsuit states.

Blankenship points to media members falsely calling him a felon or that he was convicted of manslaughter for his role in the 2010 explosion that killed 29 men at his company’s Upper Big Branch mine in West Virginia.

Blankenship was only found guilty of a misdemeanor for the chronic safety violations at the mines he once managed.

"These false claims were not simple insults, but rather part of a concerted plot by the establishment media to destroy Mr. Blankenship personally and interfere in a federal election," the complaint states.