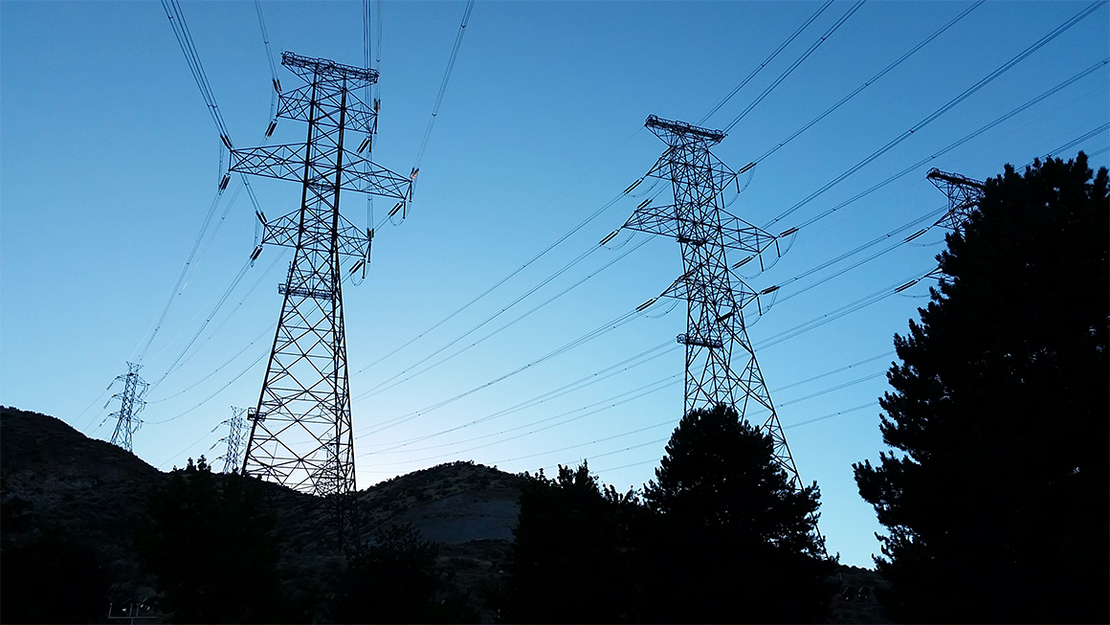 Electric power transmission lines at the Grand Coulee Dam on the Columbia River in Washington state. The Interior Department has approved construction of the Ten West Link transmission line project, which will delivery electricity in Arizona and California. Varistor60/Flickr

The Bureau of Land Management has authorized construction to begin on a 125-mile-long transmission line project across Arizona and Southern California that is projected to help carry electricity generated from renewable energy sources to customers in both states.

The Obama-era 500-kilovolt Ten West Link transmission line has been in the works since early 2016, and a record of decision approving the project was issued by former President Donald Trump’s BLM in November 2019.

Most of the length of the power line’s route — 103.5 miles — will cross federal lands in Arizona, with a final 21.5-mile section of line running through Southern California near Blythe, where BLM has approved or is considering a number of large-scale photovoltaic solar projects.

In total, the Ten West Link transmission line is designed to carry 3,200 megawatts of electricity — enough to power about 960,000 homes.

The Ten West Link project, and previous routes evaluated when the project was proposed in early 2016, caused some concern about potential impacts to the Kofa National Wildlife Refuge in southwest Arizona (Climatewire, July 27, 2016).

“BLM Arizona worked closely with a variety of stakeholders and carefully considered their input in order to develop the best possible route,” Suazo said in a statement. “Through this close collaboration, we developed a route that will help meet our region’s energy needs while avoiding impacts to military readiness and operations, local communities, popular recreation areas, the Kofa National Wildlife Refuge and Tribal lands.”

Expanding electric transmission capacity is a top priority for the Biden administration, which has a goal of permitting 25,000 MW of solar, wind and geothermal power projects by 2025, as well as a broader goal of weaning the nation’s power grid off fossil fuels.

BLM in May issued notices of intent to prepare environmental impact statements for the 470-mile Greenlink West power line — proposed to run from Las Vegas to Reno, Nev., carrying thousands of megawatts of electricity generated from planned solar projects in the state — and the 214-mile Cross-Tie 500-kV transmission line, connecting central Utah and east-central Nevada (Greenwire, May 2).

At the same time, BLM also unveiled a draft EIS for the SunZia Southwest Transmission Line Project stretching across 520 miles between central New Mexico and Arizona, which is aimed at transporting renewable energy to major load centers.

The Ten West Link project and the others go hand in hand with other recent announcements advancing renewable development across the West.

The Interior Department tied the transmission line’s construction authorization to BLM’s notice to proceed with construction yesterday of the 500-MW Oberon solar project, which when built will cover about 2,600 acres inside the 22.5-million-acre Desert Renewable Energy Conservation Plan area in Southern California (E&E News PM, July 13).

BLM earlier this year formally approved issuing a right-of-way permit for Oberon, which will be the third solar project built inside the DRECP (Greenwire, Jan. 18).

Interior also tied the Ten West Link project to BLM’s approval last year of the first two large-scale solar power projects in the DRECP — the Arica and Victory Pass photovoltaic solar projects covering 1,300 acres and with a collective capacity to produce up to 465 MW of electricity (E&E News PM, Dec. 21, 2021).

If all are built, they have the capacity to add more than 41,000 MW of electricity to the Western power grid, BLM said.