BLM chief: Past support for land sales is ‘irrelevant’ 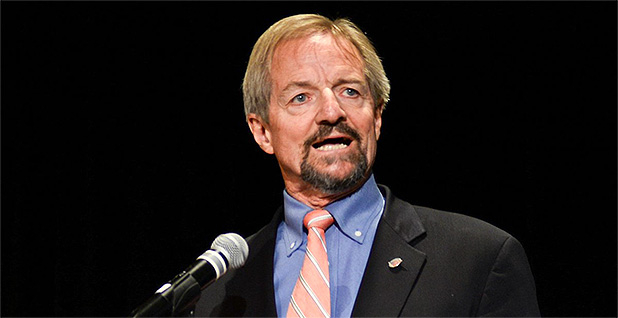 Breaking his media silence, BLM acting chief William Perry Pendley told a radio program that his past desire to sell off public lands is irrelevant to his current position. @Sagebrush_Rebel/Twitter

William Perry Pendley, the controversial new acting director of the Bureau of Land Management, broke his media silence yesterday by saying his previous support for selling public lands was "irrelevant," calling the criticism that has flared up since his quiet ascension to a post overseeing the 245 million acres of public land as "nonsense."

His posting immediately riled congressional Democrats and conservation groups, given his long history of fighting the federal government and advocating, as he did in a 2016 article in National Review, that the Constitution all but required a sale of federal lands.

Not anymore, he said on "Montana Talks," a statewide conservative talk radio show.

The former marine said he understood "chain of command."

"I understand and know how to follow orders. I get it," he said. "Whatever I’ve done or said in the past is irrelevant."

Pendley also spoke about moving BLM headquarters to Grand Junction, Colo., casting the decision as an opportunity to place expertise at the local level.

"We’re going to put people in Billings and Boise and Reno and Santa Fe and Cheyenne, absolutely," he said in response to a question about placements in Montana.

Pendley implied that it was crucial to move officials to the West in order to better complete one of the bureau’s chief duties: finishing environmental reviews of projects.

Much of the environmental analysis grunt work that compose environmental reviews is done locally, with some field work contracted out, but Pendley said those reviews needed experts who weren’t currently located in the field.

"They are here in Washington," he said. "They should be out West where the projects are underway, and we are eager to get them there."

Pendley described an all-hands-on-deck approach to ensure that the move of BLM employees goes smoothly. His comments on what would happen for employees that don’t want to move was cut off when the radio station cut to commercial.

"If people are not in a position to make the move out to the West — obviously I would recommend it. It’s a great place to live and raise kids," he said.

Pendley also praised President Trump during the interview for "courage" when reducing the acreage of Obama-era monument designations like Bears Ears National Monument and pardoning the Oregon ranchers who were convicted of terrorism for lighting fires on federal land.

Montana environmental groups were quick to respond following the interview, drawing in Republican Sen. Steve Daines. The senator, who is up for reelection in 2020, came under fire recently for saying the backlash over Pendley was "overblown."

"Senator Daines told us he ‘has not found a reason’ to be concerned by Mr. Pendley’s record of crusading against public lands," said Whitney Tawney, deputy director of Montana Conservation Voters, said in a statement yesterday. "We hope Senator Daines has lots of reasons after this alarming interview, and we hope he joins Montanans in realizing Mr. Pendley is not fit to lead the BLM."

Pendley’s authority at BLM lasts until Sept. 30 — the last day of the 2019 budget cycle — according to the amended secretarial order signed by Bernhardt. Pendley took the reins from Casey Hammond, who had also held the post on an acting basis.

The president has yet to nominate a BLM director, who would have to be approved by the Senate.