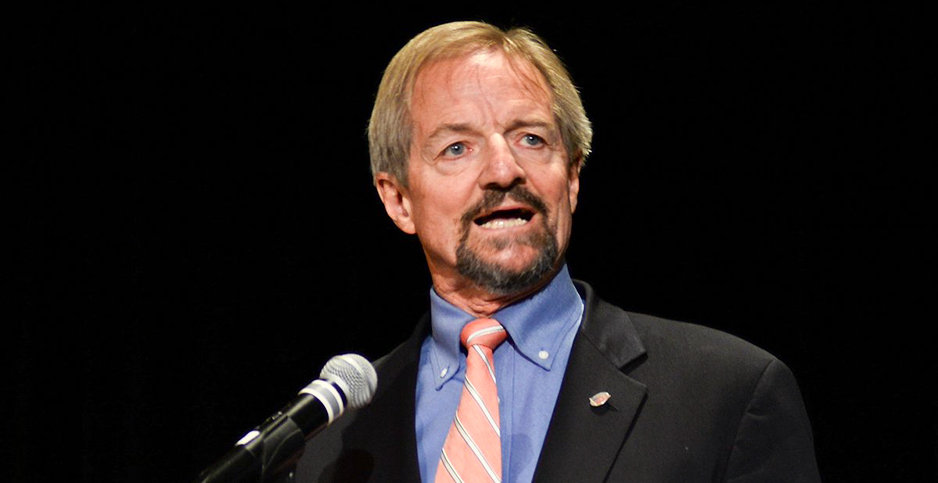 Attorney William Perry Pendley has risen to the top spot at the Bureau of Land Management. @Sagebrush_Rebel/Twitter

Nearly 40 years ago, a young lawyer from Wyoming helped craft the Reagan administration’s move to auction a record 1.6 billion tons of coal in Wyoming and Montana.

It was too much coal for the damp market of 1981. The mammoth lease sale of undervalued resources shorted the federal government — and the American taxpayers — about $60 million, according to a federal commission.

Ultimately, that young lawyer, William Perry Pendley, now the acting director of the Bureau of Land Management, shouldered much of the blame for ignoring the risks of overleasing and acting with "undue haste" to lease a predetermined record amount of coal despite market conditions.

But the 1984 commission put together by Congress was a late rebuke. In some circles, the lease sale was considered a success, part of a revolution: The Interior Department had dramatically changed its approach to managing natural resources under the aggressive policies of then-Interior Secretary James Watt.

Pendley, who a 1983 Washington Post report described as Watt’s "ideological twin," had carried out his mission supporting those policies to broad acclaim, according to Pendley’s correspondences from the time, housed at the University of Wyoming.

Industry groups, coal companies and Reagan officials all favored the young man and his unwavering support of the administration’s energy goals.

But that 1984 commission would mark the end of Watt’s, and soon after Pendley’s, career at Interior.

The former Marine appears poised to reprise his role as faithful commander during a time of great change in the federal government’s management of natural resources.

He heads the bureau at a critical time, both politically — as the 2020 election looms over the energy and public land priorities of the Trump administration — and practically. BLM has numerous key documents in development furthering the energy dominance agenda, from a pending revision of what habitats are protected from oil activities within the National Petroleum Reserve-Alaska to numerous environmental reviews that undergird oil, gas and mining activity in the West.

Friends call him a patriot and see his Reagan years as just the beginning of his conservative bona fides, but critics have rallied to oppose him, alarmed by Pendley’s legal career and writings, which include an unabashed animosity toward environmentalism and controversial views about public lands (Greenwire, Aug. 30).

In a 2016 opinion article in the National Review, Pendley argued that the federal government likely has no legal right to own public lands and that it is nearly constitutionally bound to sell them. In an op-ed article in The Denver Post more recently, Pendley argued that his stance has been mischaracterized and that claims he does not believe in public lands are "wholly inaccurate."

His reprisal at Interior sent a flutter though the conservation community and through BLM (Greenwire, July 30).

"Mr. Pendley is not someone who should be entrusted with the management of our public estate," said Land Tawney, president of a Backcountry Hunters & Anglers, a conservation-minded hunting and fishing group in the West. "The fox has taken control of the hen house, and he is poised to systematically dismantle the very resources he is charged with overseeing."

From Wyoming to Washington

Pendley was born and raised in Cheyenne, Wyo.

He went to George Washington University in Washington, D.C., for an undergraduate and later a master’s degree. He returned home to Wyoming to obtain a law degree at the University of Wyoming College of Law in Laramie.

His studies were interrupted by the Vietnam War. Pendley joined the Marine Corps. He was based in Japan and the Philippines, flying electronic countermeasures to assist bombing runs over North Vietnam, according to an E&E News profile in 2014.

Pendley returned to Wyoming and finished his degree. Jobs were scarce in Wyoming, so he went to Washington, working for former Wyoming Sen. Cliff Hansen (R) and what was then the House Interior and Insular Affairs Committee, the profile notes.

Pendley helped Watt prepare and execute his Senate confirmation to be Interior secretary. He was later hired as deputy assistant secretary for energy and minerals. His personal records reveal a tireless effort to connect with mineral companies and remove any federal impediment to industry.

"The minerals industries have been especially hard-hit by the costs of environmental control, often in ways which were not considered at the time regulations were developed. The results have been plant closing and diminished production capacity in industries vital to our economy and security," he wrote to Anne Gorsuch, Reagan’s head of EPA, in a 1981 letter offering to collaborate on regulations that affect mineral industries.

Gorsuch was later forced to step down due to Congress’ opposition to the deregulation fervor at EPA. (Her son, Neil Gorsuch, is now an associate justice on the Supreme Court.)

But Pendley often referred to the insecurity that could hit the country without federal support of a robust minerals industry.

"We must never again find ourselves as vulnerable as we were in the winter of 1973," he told the Senate in his confirmation hearing, referring to the oil crisis of the ’70s.

‘For those who love liberty’

Pendley’s focus shifted in his role as a private lawyer. He helmed the Mountain States Legal Foundation, a small conservative firm that took on cases pitting the little guy against big government, from 1989 to late last year.

For many years, Pendley would mount any Western stage that would have him, friends said.

He painted the West as a battleground for the American dream and those fighting against the federal government’s heavy hand as its heroes.

"The battle is not for the faint of heart. … But, for those who love liberty, and find truth and inspiration in the vision of the founding fathers, it is the only way," he wrote in "Warriors for the West: Fighting Bureaucrats, Radical Groups, and Liberal Judges on America’s Frontier," one of three Pendley books on a similar theme. It tells the struggle of various Western individuals whose actions — like a Montana man’s slaying of a grizzly bear — fell on the wrong side of federal laws.

Ted Nugent — the outspoken, and to some offensive, singer — is quoted on the inside jacket calling "Warriors" required reading for outdoorsmen who need to understand what the "enviro-wackos" are doing to America.

Paul Seby, a Denver lawyer who Pendley hired in the early ’90s right out of law school, defended his mentor against the critics who have arisen in opposition.

Pendley has a tremendous amount of energy for work that he believes in, Seby said.

The lawyer didn’t soften the beliefs that Pendley has espoused over the years, but he scoffed at the notion that they were fringe.

When Pendley took the helm of the Mountain States Legal Foundation, he refocused its work to high-profile cases, ones that often pitted those rural people against big government.

He told E&E News in a 2014 profile of the foundation that he had three goals (Greenwire, Jan. 2, 2014). One was to win. The others were to plant seeds for the greater garden: set legal precedent and educate the public on "threats to constitutional liberty and the rule of law."

Though a small shop, the foundation has tried to intrude on the legal landscape, choosing cases that would alter legal precedent.

"We didn’t take cases just to reinforce the law. We took cases to either push the law or change the law," said Steven Lechner, a Colorado lawyer who worked under Pendley for nearly three decades at the foundation.

Lechner, like Seby, defended Pendley against the noise that has erupted since the news broke of his posting at BLM.

"I don’t think Perry is fringe, I think he follows the rule of law," Lechner said.

Pendley’s view of the law is what has more than one person concerned.

Larry Wolfe, a retired industry lawyer and longtime political observer in Wyoming, described Pendley as a "true believer in the Eric Hoffer sense," referring to the wandering political philosopher of the ’60s who opined on fanatics and mass social movements.

"Pendley in front of an audience has the manners and approach of an old-time Southern preacher," said Wolfe, who’s known Pendley for about 25 years. But beneath that is a fierce loyalty to extreme beliefs about who has authority and ownership of the land, he said.

"He is a zealot, without a doubt," Wolf said in an email. "A man whose mission in life has been to get the Feds out of the business of managing Western lands or to so reduce regulation that the long-time landowners are left as the only ones who will make land management decisions."

"That tells you all you need to know," he said.

The Sagebrush Rebellion is often seen as a relic, a movement that flared up ahead of the Reagan years and fizzled out. But offshoots of that first fire are still burning, said Gregg Cawley, a political science professor at the University of Wyoming and an expert in the Sagebrush Rebellion.

Sagebrush Rebellion adherents argued that the federal government acted as an "absentee landlord." To some, federal ownership should be fully revoked through transfer or sale of public lands. To many others, control of those lands should simply be shifted to the local level. In the West, where states may have 50% or more of their land and mineral wealth in federal hands, it’s a sometimes popular set of ideas with deep roots, Cawley said.

But it’s also a movement predicated on bluster. The rebels used aggressive language and over-the-top demands to frighten Washington into better collaboration with states, he said. It was a tactic to ensure more local management and encourage energy development — the economic engine of many areas of the West, he said.

"In their best moments, [figures like Pendley] are trying to remind folks about [energy’s importance to our daily lives]," Cawley said.

And at their worst, they are "taking a script from the McCarthy era," he said.

For Pendley, the bad guys are those affiliated with environmentalism, he said. "These folks take that -ism very seriously," he said of Pendley.

Observers say Pendley will have broad opportunity to enact his vision of the West as the chief of BLM.

It’s a role that gives him tremendous influence, said Pat Parenteau, senior counsel in the Environmental and Natural Resources Law Clinic at the Vermont Law School.

But Pendley is largely a "foot soldier," Parenteau said, brought in to push through as much of Trump’s energy agenda as possible before 2020, when they could potentially lose power.

"Bernhardt is the brains of the outfit," Parenteau said, echoing a common refrain that the Interior secretary has a sharp and strategic legal mind. "[Pendley] is going to do what he is told, and he is going to make sure the people under him are doing what they are supposed to do."

Pendley has been mostly silent since the posting but appears to have a similar view of his position.

He deferred a request for an interview to Interior’s communications staff on Aug. 3. Interior did not provide an interview in time for this story.

On a conservative talk show in Montana last Wednesday, Pendley professed great respect for President Trump. It’s a switch from 2016 when, in a Daily Caller article, Pendley said Trump wasn’t "fit to pull off Reagan’s boots."

And he downplayed his own fervent personal beliefs. He said he now has a role to play and a boss to answer to, one that "adamantly" opposes the sale of public lands.

"I’m a Marine," Pendley said. "I understand and know how to follow orders. I get it. Whatever I’ve done or said in the past is irrelevant."