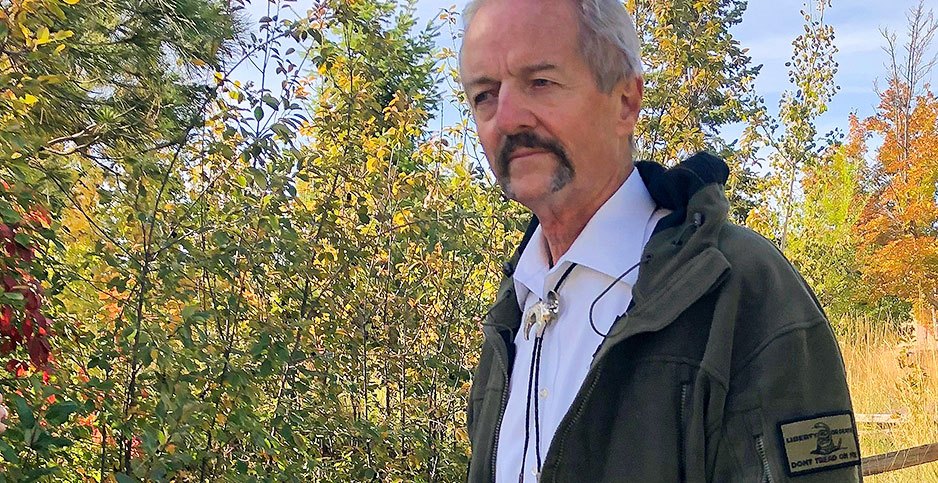 William Perry Pendley wore a jacket yesterday with a controversial patch. His role at the Bureau of Land Management continues to be refined by the Department of the Interior. AP Photo/Keith Ridler

BLM is posting links to its department manual that explain the deputy director of policy and programs — Pendley’s formal title — ranks among the bureau’s senior leaders and "shares the Director’s responsibility for all BLM functions."

The new information appears to have been added this week to Pendley’s formal biography on BLM’s online leadership page.

The move is noteworthy as it follows Montana Chief District Judge Brian Morris’ order last month that said Pendley led BLM illegally for more than a year and barred him from continuing to do so (Greenwire, Sept. 25).

It also follows a news conference in Boise, Idaho, yesterday, during which Pendley once again asserted he’s not leaving BLM and will continue as deputy director of policy and programs.

"I love this job," he told reporters outside the National Interagency Fire Center, the Associated Press reported. "I’m proud of what the president is doing."

Morris’ order does not take issue with the legality of Interior Secretary David Bernhardt’s decision to appoint Pendley as BLM’s deputy director of policy and programs on July 15.

The order rules that Bernhardt’s subsequent decision two weeks later to add "exercising the authority of director" to Pendley’s title, and to continue to extend that authority in four separate secretarial orders, was illegal.

BLM has since removed "exercising the authority of director" from Pendley’s title.

And while the Interior Department has said it strongly disagrees with Morris’ order concluding that he led BLM illegally for more than a year, Pendley said the bureau will comply with the ruling.

Morris’ order says that only Bernhardt has the authority to perform the duties of BLM director at this point.

It had yet to do so today at the time of publishing this report.

Pendley, a conservative lawyer who over the years was involved in numerous lawsuits challenging federal land management practices, has sparked a lot of controversy.

He has in the past advocated for the sale of federal lands in the West. He also wrote an extremely controversial op-ed in November 2017 asserting that the Black Lives Matter movement was based on a "terrible lie" (Greenwire, June 29).

During yesterday’s news conference, Pendley wore a green jacket with a patch on the left sleeve that depicts a coiled American rattlesnake with the words "Liberty or Death" and "Don’t Tread on Me."

The image is associated with the so-called Culpeper Flag, devised by a militia group in 1775 that fought in the American Revolution. The group disbanded but reformed in 1860 and fought in the Confederate Army during the Civil War.

The various versions of the symbol have been controversial: criticized by some as racist, decried by others as anti-government. Tea party activists most recently used the symbol a decade ago.

In an emailed statement to E&E News, BLM referred to the patch as the Gadsden Flag. It is a symbol of the American Revolution and was developed in 1775 by Christopher Gadsden, a colonel in the Continental Army. However, the Gadsden Flag does not have "Liberty or Death" written on it, like the Culpeper Flag that Pendley appeared to be wearing.

"Deputy Director Pendley is exercising his First Amendment right to wear what is commonly known as the Gadsden Flag because it was created in 1775 during the American Revolution and has been an icon of American patriotism ever since," BLM’s statement said.

"Deputy Director Pendley denounces attempts by extremists of all stripes to co-opt and distort the meaning of this enduring symbol of liberty and democracy," it adds. "As a public servant, he stands resolutely with those who support our democracy and the government of the United States."

But Pendley’s Culpeper patch — first reported by the AP — certainly denotes the defiance the Trump administration has shown for Morris’ order.

BLM this week introduced a "correct the record" statement, once again asserting that Morris’ order has no practical impact on Pendley’s duties (Greenwire, Oct. 14).

BLM has made it a public point that Pendley was never acting BLM director, only that Bernhardt had granted him authority to perform the duties of the director.

"I have never been acting director," Pendley told reporters at yesterday’s news conference in Boise, according to the AP.

Morris was very clear on that point in his order.

"Federal Defendants’ argument attempting to distinguish an ‘Acting Director’ from an ‘official performing the Director’s duties under the Secretary’s delegation’ represents a distinction without a difference," he wrote.

"The President cannot shelter unconstitutional ‘temporary’ appointments for the duration of his presidency through a matryoshka doll of delegated authorities," Morris concluded.

Pendley in the past two weeks has spoken with various media outlets, each time defending his role at BLM.

Pendley told Wyoming’s Powell Tribune in an interview last week that Morris’ ruling barring him from "exercising the authority of director" of BLM "has no impact, no impact whatsoever" on his duties at BLM today (Greenwire, Oct. 9).