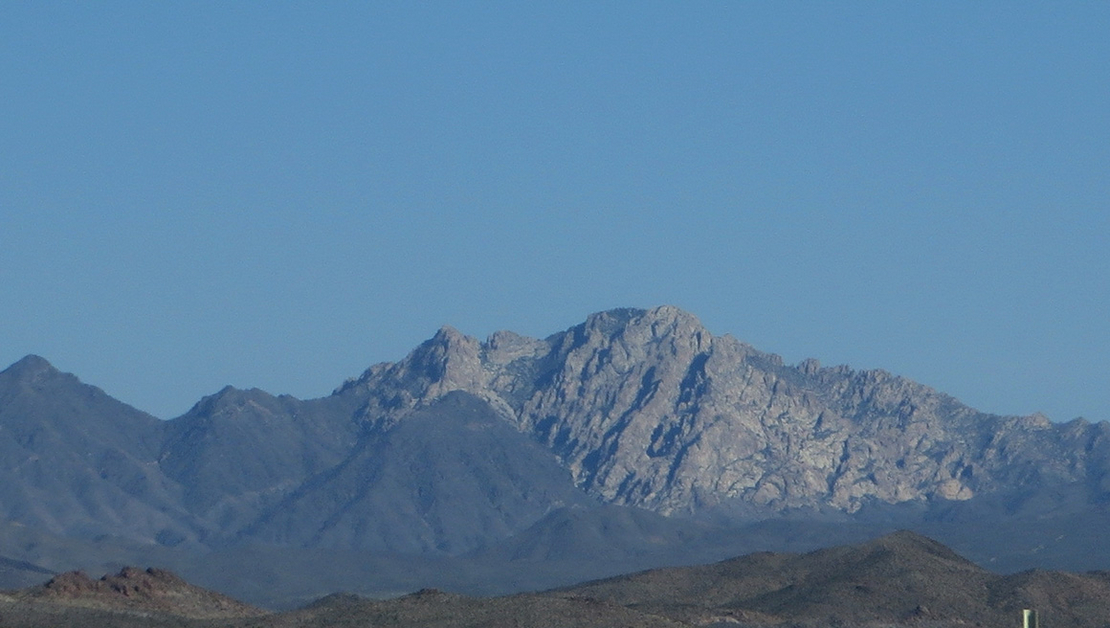 Avi Kwa Ame — the Mojave name for Spirit Mountain — in Nevada. Conservationists are pushing to make the mountain and the surrounding lands a national monument. Ken Lund/Flickr

The Bureau of Land Management dealt a new setback to energy developers who have long vied to build a wind farm in the Mojave Desert, designating the project "low priority" status.

Although not an outright rejection, the classification is an indication the project — the Kulning Wind Energy Project proposal — "may not be feasible to authorize," according to BLM’s regulations.

As proposed, the 68-turbine wind farm would stretch across nearly 9,300 acres of federal lands due south of the Wee Thump Joshua Tree Wilderness. The company states the project would affect 700 acres of those lands.

Those lands also overlap with the footprint of a 380,000-acre site that Native Americans and conservation groups are pressing the Biden administration to designate as the Avi Kwa Ame National Monument. The proposed site includes the Mojave name for Spirit Mountain and its surrounding lands.

But Eolus North America Business Development and Governmental Affairs Director Lucas Ingvoldstad said the company plans to press forward with its proposal, touting that the project aligns with President Biden’s renewable energy goals, including a directive in the 2020 omnibus spending bill (Energywire, Dec. 23, 2020).

That provision directs the Interior secretary to authorize 25 gigawatts of electricity from wind, solar and geothermal energy projects by 2025.

Ingvoldstad also argued that the wind farm and the national monument could co-exist, noting the renewable energy project would comprise a "very small portion of the monument."

"Eolus has and will continue to support the permanent protection of Spirit Mountain, as well as additional conservation measures planned throughout Clark County," Ingvoldstad said. "We are confident there is a sensible path where the Kulning project, Spirit Mountain, and the Avi Kwa Ame monument can all co-exist. When fully evaluated and studied through NEPA, we are confident the Kulning project will show minimal impacts."

BLM officials previously rejected another Crescent Peak Renewables proposal for the same region, but the 500-megawatt project would have required an even larger footprint of nearly 33,000 acres of public lands.

That denial focused on concerns over potential interference with radar at a military and civilian airport, as well as "impacts to the visual landscape" (Greenwire, Dec. 3, 2018).

Basin and Range Watch founder Kevin Emmerich, who spent two decades with the National Park Service before founding the nonprofit conservation group, praised BLM’s most recent decision as an acknowledgment the proposal "has too many conflicts."

"It is a pretty good blow to that project and hopefully it will be the end of it," Emmerich said.

The ‘place of creation’

Although BLM’s rating does not mention the proposed monument, tribal advocates have long-argued that the area needs to be protected as a cultural landscape, given its role as the "place of creation" for numerous Native American tribes.

Native Voters Alliance Nevada Executive Director Taylor Patterson, who is also a leading advocate for the monument, praised BLM’s latest decision as an example of the administration responding to feedback from tribal governments, which oppose the project.

"It symbolizes the changing tide," said Patterson, who is a member of the Bishop Paiute Tribe. "Tribal members are not opposed to renewable energy or development projects, but these projects need to go in the right areas."

Still, proponents of the monument suggested BLM’s low rating, while welcome, was not unexpected.

"We can take that issue off the table and move forward as we have been," added Desai, who has advocated for the monument’s creation for more than a decade.

He touted the support of local governments, which would serve as the gateway communities to a new monument.

The Laughlin Town Advisory Board recently voted in favor of the proposed boundaries, joining earlier endorsements from elected officials in Boulder City and Searchlight (Greenwire, Oct. 19).

"This monument is a win-win-win across the board," Desai added, arguing the project would benefit Indigenous communities, conservation efforts and climate change. He noted the proposed boundaries include the existing Piute-Eldorado Valley Area of Critical Environmental Concern.