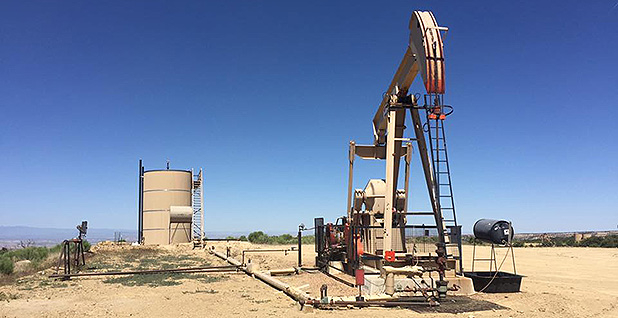 The Bureau of Land Management is set to release the final version of its methane regulation. Ellen M. Gilmer/E&E News

The Interior Department revealed a final plan today for giving oil and gas producers more time to comply with methane restrictions for operations on public lands.

The Bureau of Land Management’s final rule postpones by one year many of the requirements of the 2016 Methane and Waste Prevention Rule. The delay, set for publication in tomorrow’s Federal Register, doesn’t substantively change the earlier rule.

Interior’s suspension of the Obama-era rule fits into a broader review of regulations that the Trump administration says "potentially burden" domestic energy production.

"As we strengthen America’s energy independence, we need to make sure that regulations do not unnecessarily encumber energy production, constrain economic growth, or prevent job creation," Brian Steed, BLM’s deputy director for policy and programs, said in a statement. "By holding off on certain requirements, the BLM now has sufficient time to review the 2016 final rule while avoiding any compliance costs on industry that may not be needed after the review."

Trade groups representing the oil and gas firms that would have had to start complying with many parts of the Obama rule by Jan. 17, 2018, welcomed the extension.

"This action is a good step in providing our member companies some much-needed certainty as they plan their capital expenditure budgets for the upcoming year," Independent Petroleum Association of America (IPAA) President and CEO Barry Russell said in a statement. "It is never the desire of any company to waste a valuable product that could otherwise be brought to market and sold to the American consumers."

Companies that have signed on to the API program say it is not an attempt to avoid federal regulation. Environmental groups said the voluntary push pales in comparison with methane controls introduced by BLM and U.S. EPA. It’s even weaker than Exxon Mobil Corp.’s self-imposed standard, they said (Climatewire, Sept. 27).

"The delay of the BLM methane waste rule is unwise and unnecessary," said Wayne Warmack, owner and operator of the Double W Ranch in Colorado and a former oil worker. "In fact, Exxon Mobil has already committed to complying with the BLM rule, and all companies should be held to that same standard."

Groups that backed the Obama rule knocked the suspension for its climate and financial implications.

"Today the Department of the Interior finalized a rule that takes taxpayers back 30 years in the battle to stop the waste of natural gas, and get taxpayers a fair return," Taxpayers for Common Sense President Ryan Alexander said in a statement.

BLM’s delay isn’t the first attempt to gut the 2016 rule. Late last year, states and industry groups filed lawsuits to fight the regulation. That litigation is one of several courtroom actions targeting both attempts by former President Obama’s BLM to regulate methane leaks and President Trump’s BLM to undo those actions.

When Trump took office, lawmakers wielded the little-known Congressional Review Act to scrap 15 rules introduced in the twilight of the Obama administration.

In May, a resolution to kill the 2016 BLM methane rule came to a vote on the Senate floor. The measure failed without the support of a simple majority.

Just a month later, BLM proposed to indefinitely halt provisions of the rule that had yet to take effect — without engaging in a public notice and comment period.

The Trump administration was under the gun to finalize the delay. Oil and gas operators, which have opposed the regulation in court since its 2016 release, have pressured BLM to wrap up its rulemaking process quickly. The first phase of the Obama rule is already in effect, and the next, more costly requirements were set to kick in next month — giving heartburn to drillers unsure of whether they would be required to comply.

Lawyers for the IPAA and Western Energy Alliance have expressed frustration about the long process, noting that they’ve been on a regulatory roller coaster after multiple failed attempts to sideline the rule through other measures.

In recent court filings in Wyoming, the industry groups asked to fast-track consideration of their case against the Obama rule. The Trump administration pushed back, seeking to avoid continued legal action in light of the ongoing rulemaking process. After BLM promised to complete the delay by Dec. 8, the court sided with the government, agreeing that finalization of the delay "may very well moot the Petitions for Review now before the Court."

Groups supporting the Obama rule are expected to challenge BLM’s latest move in court. Environmental lawyers this morning said they were reviewing the decision and coordinating with their partners on next steps.