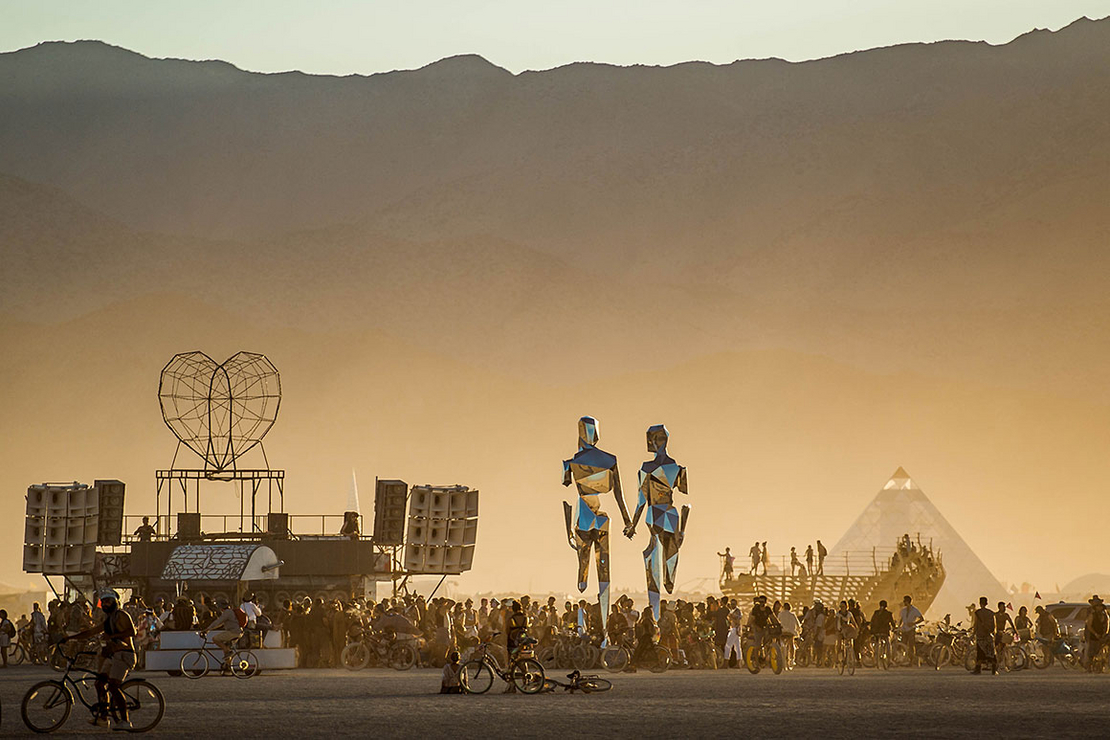 People gather for a sunset party at the foot of “Broken Together,” a sculpture by artist Michael Benisty, and the Robot Heart art car during the annual Burning Man celebration in the Black Rock Desert in Nevada in 2019. Watchara Phomicinda/Orange County Register via ZUMA Wire/Newscom

The Bureau of Land Management is taking steps to protect the Black Rock Desert playa in anticipation of thousands of people attending an alternative event to the annual Burning Man festival later this month at the remote Nevada site.

The world-famous Burning Man festival was canceled in April for the second year in a row due to the COVID-19 health crisis. But an informal alternative event — billed as "Renegade Man" — is planned for Aug. 29-Sept. 5, and BLM is implementing "temporary restrictions" within and adjacent to the Black Rock Desert-High Rock Canyon Emigrant Trails National Conservation Area north of Reno, Nev.

The restrictions cover about 130,000 acres of federal lands, and include bans on building and burning wooden "structures" — a highlight of the Burning Man festival — as well as rules against dumping wastewater, using "flame effects" or even landing aircraft within the protected area, according to a notice in today’s Federal Register.

The restrictions take effect starting tomorrow, when the bureau will formally publish the notice in the Federal Register, and will remain in effect through Oct. 31.

BLM had told event organizers in June that it would be imposing the restrictions, according to the Reno Gazette-Journal.

"The BLM has received many inquiries and has reviewed available information online and has determined that use of the playa is likely to be high," BLM says in the notice. "These temporary restrictions are necessary to provide a safe environment for members of the public visiting the Black Rock Desert playa as well as special recreation permittees."

BLM warns in the notice that violators will be prosecuted and could face fines and prison sentences of "no more than 12 months."

The alternative Renegade Man is the latest chapter in the typically bizarre annual Burning Man gathering, which organizers billed as a lifestyle and entertainment event that attracts roughly 80,000 people. Last year, about 5,000 attended a "No Burning Man" alternate event at the site.

As many as 20,000 people could attend this year’s alternative event, some attendees have speculated on social media.

Plans are in place for the Burning Man festival to resume next year.

"If you break down or get lost it could be several days before someone finds you! Make sure someone knows where you are going and when you expect to get back," it adds.

Organizers of this year’s "non-event, event" posted on its official website that tickets, which apparently are required, "are selling out quickly."

They also warned those planning to attend to prepare to be isolated, with no modern amenities.

"There will be no infrastructure provided AT ALL," they posted. "No portopotties, no ice, no coffee for sale. This is the ultimate camping trip for Radical Self Reliance."

Prior to the cancellation of the formal Burning Man event the past two years, BLM has issued special recreational permits to allow for the burning of a giant wooden structure. No such permits will be issued this year.

"For those heading to the desert, be aware of the restrictions!" one person posted on the "Burning Man 2021 Renegade" Facebook site that included a link to BLM’s Federal Register page.

"Please understand, the BLM is only implementing them to keep everyone safe and the playa and surrounding areas environmentally sound," the person, identified as "Elecktra QT," posted.