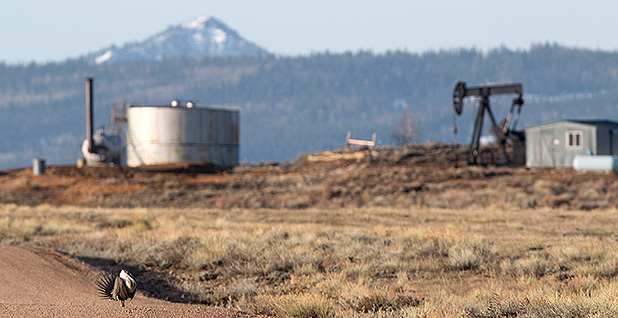 A sage grouse wandering near an oil pump jack in Colorado. milehightraveler/istockphoto

Federal officials have withdrawn thousands of acres of land slated for sale to the oil and gas industry after courts demanded that the government take a closer look at greater sage grouse habitat protections and climate change impacts.

"The broader pattern we’ve seen from this administration has been a headlong rush to get as much remaining sage grouse habitat under lease as possible," said Michael Saul, a senior attorney at the Center for Biological Diversity’s public lands program.

"That needs to stop," Saul said. "They are not simply a real estate sales agency. Under congressional statute, they have multiple obligations, which include duties to conserve wildlife habitat."

Judge B. Lynn Winmill, a Clinton appointee to the U.S. District Court for the District of Idaho, required BLM to revert to evaluating leases under sage grouse plans the Obama administration finalized in 2015.

"Parcels in the December 2019 sale will be reconsidered for a future sale due to a Preliminary Injunction entered Oct. 16, 2019 by the U.S. District Court, District of Idaho," BLM wrote in its notice yesterday.

The six parcels covered 4,259 acres and were subject to sage grouse habitat restrictions.

Conservation groups lauded the move, while urging BLM to take more permanent action to stop lease sales on the birds’ habitat. Other state offices could defer or cancel leases as more sales approach next month.

"BLM has done the right thing by cancelling its December 2019 oil and gas lease sale," Kelly Fuller, energy and mining campaign director at the Western Watersheds Project, wrote in an email.

"Now BLM needs to keep doing the right thing: No more oil and gas leasing in greater sage-grouse habitat or anywhere else," she continued. "To protect human life, wildlife, and habitat, BLM must stop all new oil and gas leasing. It is time to keep fossil fuels in the ground."

BLM’s notice came after the Colorado office missed a deadline for publishing its lease sale notice 45 days ahead of the planned sale, sparking some predictions from conservation groups that the agency was poised to defer the leases.

The decision in Colorado follows a move by BLM’s Nevada office to sharply reduce the amount of land up for sale this week in the Silver State.

Late last month, BLM Nevada quietly posted on its website that it had removed parcels covering 332,247 acres of land from its Tuesday lease sale for "further analysis" as a result of Winmill’s injunction. The change was listed under "Errata #3" on the state BLM page and was not publicized by the agency.

BLM offices in Wyoming and Utah, both of which have already posted lease sale notices for Dec. 10 and 11, have yet to address the court order.

A spokesman for the agency said in an email late Tuesday afternoon that BLM is complying with Winmill’s instructions requiring compliance with the 2015 sage grouse plans until the injunction is lifted.

"Consequently, as it considers its options for responding to the preliminary injunction, any parcels that BLM seeks to offer in any upcoming fluid minerals lease sales will be offered consistent with the requirements under the 2015 sage-grouse plans," Derrick Henry wrote in an email.

"Parcels sold outside of sage-grouse habitat management areas are unaffected by the preliminary injunction."

But Fuller of the Western Watersheds Project said the fact that the state offices still have not addressed Winmill’s order in next month’s lease sale notices puts the burden on the public to call for compliance with the injunction.

Courtney Whiteman, a spokeswoman for BLM Wyoming, said yesterday that the office is still reviewing how the preliminary injunction will affect the leases already offered and has not yet reached a final action or decision. She said to look for an accompanying document once the office makes its final determination.

The Wyoming office announced it has applied the 2015 sage grouse plan standards to its proposed lease sale of 105 parcels for March 2020, which was just released for public comment yesterday.

It’s unclear what will happen with leases BLM sold in September ahead of the preliminary injunction. So far, that question has not come before the court.

The BLM office was responding to a lawsuit filed in September by the Center for Biological Diversity, Living Rivers and the Southern Utah Wilderness Alliance, which raised claims that the agency had not adequately considered the impacts of climate change from leases in the central and northeast portions of the Beehive State (Energywire, Sept. 13).

The lawsuit encompassed eight different parcels finalized between 2014 and 2018. The leases fit into a pattern of BLM failing to adequately consider climate impacts, said Diana Dascalu-Joffe, a senior attorney at the Center for Biological Diversity.

Altogether, Utah has had over 300,000 acres of leases suspended in response to similar litigation.

"As BLM goes back to the drawing board, it’s going to make things very uncertain for operators on moving forward with new well development," Dascalu-Joffe said. "It could have a pretty significant impact, delay in the oil and gas industry can be problematic because the price of oil and gas is very volatile.

"Companies really want that certainty to able to move forward with new development."

In addition to challenges over sage grouse protections and climate change, Dascalu-Joffe said concerns about analysis of cumulative water withdrawal impacts could also become an area of legal vulnerability for BLM.

She noted that while the preliminary injunction forced BLM to look at sage grouse impacts in a more programmatic way, the same was not true for assessing climate impacts.

"I don’t have a lot of confidence that this is going to drive any programmatic analysis of climate impacts from the entire oil and gas program because that’s not how this agency works right now," Dascalu-Joffe said.

"It’s very hodgepodge and lease by lease," she added. "They are not looking big picture at all."