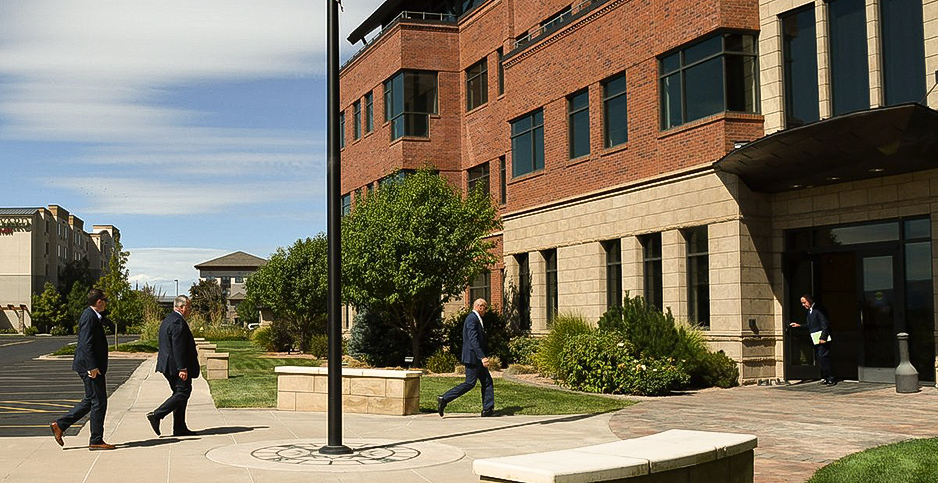 “You just never know what Mother Nature may have in store for you in your region.” Then-House Minority Leader Nancy Pelosi (D-Calif.) in 2013.”

BLM’s acting chief, William Perry Pendley, will be in Grand Junction for two weeks, followed by Mike Nedd, the bureau’s deputy director of operations, with either Pendley or Nedd in Colorado while the bureau works to get the new headquarters operational, the sources said.

"By the way, I will be in Grand Junction, Colorado at the new BLM Headquarters on January 2, 2020, for the start of the new year!" Pendley announced in an email sent last week to D.C.-based staffers (Greenwire, Dec. 12).

The two-week rotations will also extend to at least some of the BLM assistant directors who oversee the bureau’s seven directorates responsible for everything from issuing oil and gas leases to analyzing right of way permit applications.

The plan is further evidence that BLM is moving aggressively to complete the headquarters move, despite growing concern from Congress and mounting criticism from current and former bureau officials that relocation will effectively dismantle the agency by dispersing its leadership.

BLM’s relocation plan calls for transferring about 27 D.C.-based senior positions to the Grand Junction office, though BLM leaders have said that number could eventually be as high as 40. Another 200 or so positions would be transferred to state offices across the West.

The rotations also offer insight into how BLM plans to move its leaders out of D.C. and closer to the 245 million acres of lands out West that BLM oversees.

It’s not clear, though, what exactly Pendley, Nedd and the other assistant directors will be doing during their two-week stints. It’s also not clear how many BLM staffers are currently in Grand Junction and available to assist the senior leadership.

All seven assistant director positions are slated to be relocated to Grand Junction, at least according to the limited documentation on the move that has been shared publicly.

Complicating matters is that one of those seven — Nikki Haskett, acting assistant director of national conservation lands and community partnerships — is leaving to become deputy assistant director of business and fiscal resources management, according to an internal email sent yesterday by Eggers to members of BLM’s executive leadership team.

BLM released a statement to E&E News today that did not address the costs, nor did it say what exactly the senior leaders will be doing at the new headquarters building.

"We have the resources we need — which will cover the costs associated with the move to get the new HQ up and running," the statement said.

BLM says on its website that it wants to complete the relocation plan by July 1, 2020.

It also defends the move, saying that "relocating the Headquarters functions of the BLM to the western half of the United States will benefit the public we serve as well as the bureau and our employees."

But news of the rotations comes amid growing concern about how many of the 159 D.C.-based staffers who are being reassigned to Grand Junction, or to other state offices across the West, will actually accept the reassignment and report to their new "duty station" next year.

As many as 80% of the reassigned staffers plan to reject the reassignment orders and either retire or find another job at the Interior Department or other agency in Washington, numerous sources have told E&E News.

BLM has not released any numbers yet, saying publicly it will take time to compile the information. Also, some employees have asked for more than the 30 days they were given to decide whether they want to move.

The rotations appear to be part of the "Continuity of Operations Plan" the bureau said it has developed to ensure public lands management activities are not disrupted during the move out of D.C., sources told E&E News.

But critics say the rotations demonstrate how fluid the reorganization plan is, even as it’s being carried out.

"Doesn’t appear that they thought any of this through," one former senior BLM official told E&E News.

The former official also questioned whether this is a wise use of time, noting it will take the better part of two days to travel from D.C. to and from Grand Junction.

"Most of the D.C. HQ staff is likely leaving the agency, so what do these high-paid government execs do in their newly leased building?" the source asked. "Go to coffee in town with the oil company personnel?"

As for BLM’s new headquarters, the General Services Administration in September signed a five-year lease for 6,000 square feet of office space, on three floors, at 760 Horizon Drive in Grand Junction.

BLM will pay $156,278 a year to rent the office space for the new headquarters, according to a copy of the lease agreement released this week by the government watchdog group Western Values Project.

The lightly redacted lease agreement, obtained by WVP via the Freedom of Information Act, states that the federal government can request up to $250,000 worth of "alterations" to the office space "during the term of the Lease," and it’s assumed that will be part of the reason for the two-week rotations.

BLM, in its online post about the relocation plan, says "the relocation of positions to the west would result in overall substantial savings for the BLM and for American taxpayers over time. Such savings include lower rent costs for office space, lower cost of living allowances paid to employees and a reduction of travel costs from D.C. to the west."