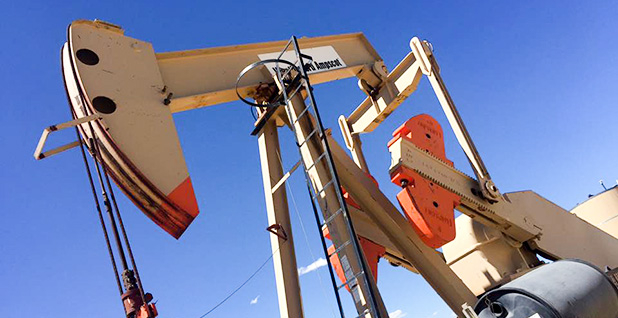 The Bureau of Land Management has implemented a second recommendation offered last week by the Interior Department’s royalty advisers.

"For many years, private and state wells have been held up by a minority of federal minerals that a lateral will touch," said Western Energy Alliance President Kathleen Sgamma.

The document reflects a proposal presented during the third meeting of the Royalty Policy Committee in Albuquerque, N.M., last week. BLM implemented another one of the panel’s recommendations just hours after it was presented — despite protests that the committee and Interior should allow more time for public input (Energywire, June 7).

"The ink isn’t even dry on recommendations from the industry-dominated Royalty Policy Committee to limit environmental review of drilling and the BLM is responding," said Pam Eaton, senior energy and climate adviser for the Wilderness Society.

Federal officials are required to conduct NEPA analyses of actions that occur on public lands, but horizontal drilling, the process by which oil and gas firms extend lateral well bores from an initial drill site, has extended the reach of a well beyond the pad.

An Obama-era memorandum, sometimes known as the "Fee/Fee/Fed" IM, said BLM may also need to consider the impacts of building and operating infrastructure on state and private lands that could be used to tap federal minerals. BLM’s newest memorandum cautions field staff not to exceed their authority on activities that occur on non-federal lands.

"That’s really an overreach by the federal government getting involved in state and private commerce," said Sgamma, who presented recommendations last week on behalf of the royalty committee’s Planning, Analysis and Competitiveness subpanel.

Nine government officials, three oil and gas industry groups, three fossil fuels producers, two conservative groups, one Wyoming official, one academic, and one renewables firm were present at the closed meeting where the subcommittee finalized its recommendations for the Albuquerque meeting.

The royalty panel has been criticized for weighing fossil fuel industry interests too heavily in its makeup (Greenwire, Sept. 6, 2017).

Sgamma said she was aware that the BLM directive had been in the works for some time but moved forward with the recommendation to show that the issue was still a priority for industry.