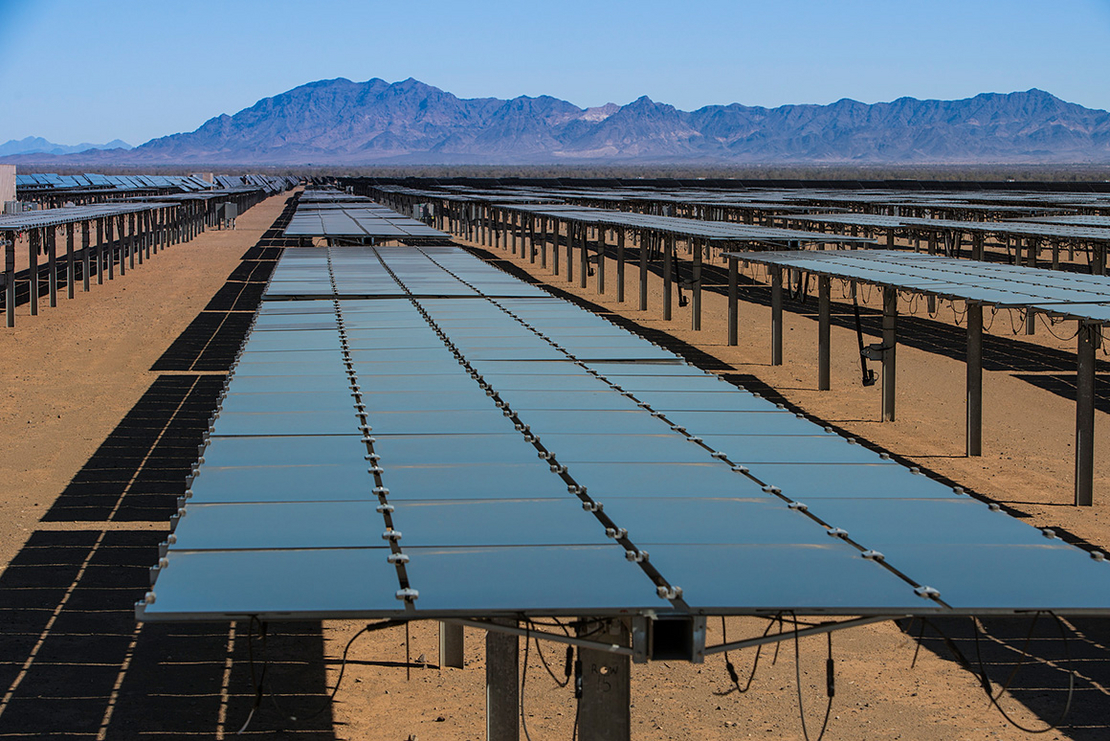 The Bureau of Land Management has approved construction work to begin on two commercial-scale solar power projects that would be the first to be built inside an Obama-era renewable energy zone in the Southern California desert.

If built, the Arica and Victory Pass photovoltaic solar power projects would cover a total of 1,300 acres of federal lands and collectively produce up to 465 megawatts of electricity — enough to power more than 130,000 homes.

The Interior Department today hailed the notice to proceed with construction because the projects would be the first built within the Desert Renewable Energy Conservation Plan (DRECP) area, which includes 10.8 million acres of federal lands already evaluated by the Obama administration in 2016 and deemed suitable for utility-scale renewable energy development. Projects within DRECP are subjected to a streamlined permitting process.

San Francisco-based Clearway Energy Group LLC could begin construction on both projects as early as this week, BLM said.

“Renewable energy development on BLM-managed public lands will continue to help communities across the country be part of the climate solution, while creating jobs and boosting local economies,” BLM Director Tracy Stone-Manning said in a statement.

BLM said today that both projects would have a combined infrastructure investment of about $689 million, generate $5.9 million in “annual operational economic benefit,” and support up to 1,000 construction jobs.

A third large-scale solar project may also soon begin construction inside the DRECP.

BLM earlier this year formally approved the nearby Oberon solar project, which would cover about 2,700 acres and have a 500-MW capacity, or enough to power roughly 140,000 homes (Greenwire, Jan. 18).

All three projects would advance the Biden administration’s goal to permit at least 25,000 MW of onshore renewable energy projects by 2025.

The Interior Department, in a report submitted to Congress in March, forecast that it’s on track to approve 48 wind, solar and geothermal energy projects with the capacity to produce an estimated 31,827 MW of electricity — enough to power roughly 9.5 million homes — by the end of the fiscal 2025 budget cycle (Greenwire, April 20).

The vast majority of that clean power — 29,595 MW — would be produced by solar projects, according to the Interior report.

The report estimates that BLM will approve projects capable of producing 11,409 MW of electricity by the end of 2023. That amount alone would nearly double the 12,000 MW of electricity from the 35 solar, 36 wind and 48 geothermal power projects that have already been approved on federal lands to date.

Meanwhile, BLM said today that it is currently evaluating 67 additional solar, wind and geothermal projects on federal lands. BLM is also in the preliminary review stage analyzing about 90 applications for solar and wind development, as well as looking at an additional 51 applications for wind and solar energy testing on federal lands to gauge the power potential of each site.