BLM panel warms to sterilization as better than ‘starvation’ 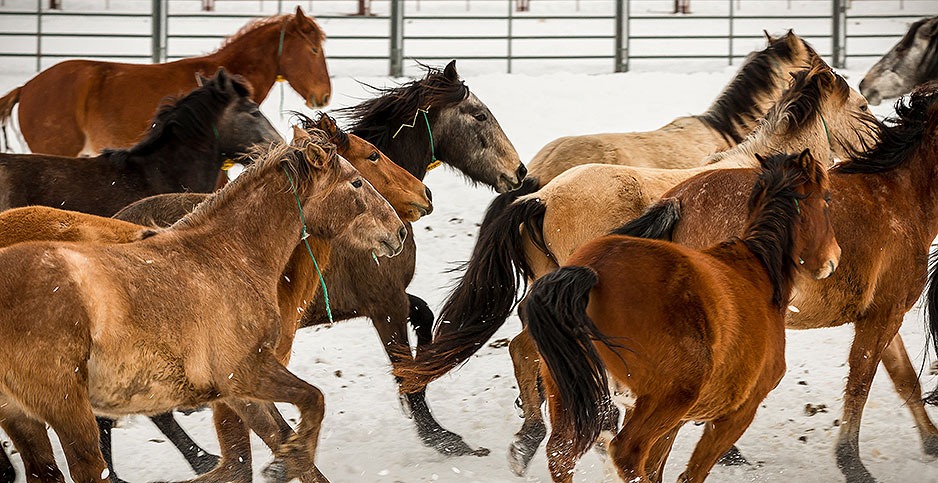 Several members of a national advisory board supported sterilization during a spirited debate yesterday on how to cull growing wild horse and burro populations.

The debate at the Bureau of Land Management’s National Wild Horse and Burro Advisory Board meeting points to a possible recommendation later today that BLM pursue research into permanent sterilization techniques of wild mares rounded up from federal rangelands.

Such a recommendation would be controversial. The use of permanent sterilization is opposed by many members of Congress as well as wild horse advocates, who have in the past few years sued to block BLM from evaluating a controversial procedure — called ovariectomy via colpotomy — that involves removing the ovaries from mares. Advocates have labeled the procedure "barbaric."

But Tom Lenz, a veterinarian on the advisory board, argued that research into the procedure is scientifically and medically valid, as the 88,000 wild horses and burros on federal rangelands are three times the number considered sustainable. In some cases, they’re struggling to find adequate forage and water.

He said the procedure is already used on domestic horses, but policymakers have allowed advocates and others who "don’t know much about this procedure" to block BLM from using it.

"I understand these are America’s horses," he said. "But these decisions have to be made by people who know what’s going on, and are experts in the field. And if the public gets upset, well, that’s unfortunate; there’s a lot of things that upset the public."

Lenz’s position drew support from fellow board member Sue McDonnell, an adjunct professor of reproduction behavior at the University of Pennsylvania School of Veterinary Medicine.

"This is one of the things that has been so disheartening to me, because the misinformation that has been spread on this topic has to be the worst I’ve seen on any topic," said McDonnell, who represents wild horse and burro research on the advisory board.

"It’s so clear, and it’s there in the [scientific] literature, and theriogenologists, reproduction specialists, know this," she added. "But the messages that are put out about brutality and that sort of thing are so sad to see because it upsets a lot of people."

The issue came up at yesterday’s meeting after Fred Woehl, the advisory board’s chairman, suggested sterilization as a potential "tool" to cull herd sizes.

Celeste Carlisle, who represents wild horse and burro advocacy on the board, noted that permanent sterilization, as it has been proposed for use to date, is "unpalatable to the public."

Foes have challenged previous efforts by BLM to research ovariectomy via colpotomy and other sterilization techniques. The bureau dropped a previous partnership with Oregon State University in 2016, and another dissolved last year with Colorado State University, after litigation from animal rights groups.

Nevertheless, BLM last summer released an environmental assessment analyzing yet another proposal to test the sterilization technique on mares at the Warm Springs Herd Management Area in Oregon (Greenwire, June 24).

A group of 80 veterinarians this week sent a letter to Interior Secretary David Bernhardt opposing the planned research.

Carlisle said the time and expense to find the necessary number of "highly trained" veterinarians to perform surgical sterilization on tens of thousands of mares would be too time-consuming and unnecessary. There are other readily available options, she said, such as increasing the number of volunteers to dart animals with fertility vaccines like porcine zona pellucida, or PZP, which renders mares infertile for about a year.

"No," said Carlisle, who serves as biologist and conservation science program coordinator for Return to Freedom, a nonprofit wild horse conservation group. "By me saying we pursue techniques [where] we’re not needing highly trained specialists to implement, that does not mean just use PZP."

Rather, she said, she’s trying to move BLM away from proposals that have already failed.

"It’s like bashing heads into the same wall over and over again, and at what point do you cut your losses and turn the ship and move and go another direction?" she said.

But Lenz and McDonnell appeared to garner support for sterilization research from new board member Susan McAlpine, who represents humane advocacy on the panel.

McAlpine said she "empathizes" with Carlisle’s position on fertility vaccines, and that solutions need to be adopted now. But, she said, "after reading, and seeing and researching and talking to people, I firmly believe that dying of dehydration and dying of starvation … is in no way humane."

The board meeting in Washington, D.C., continues through today.