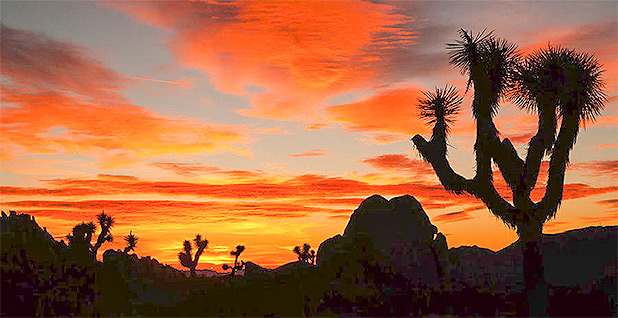 The Bureau of Land Management has given preliminary approval for a transmission line and water pipeline across federal lands needed to operate a hydroelectric project in the Southern California desert that is strongly opposed by some conservation groups.

The proposed project site is about 2 miles from Joshua Tree National Park.

BLM yesterday issued a final environmental assessment and proposed land-use plan amendment that clears the way for a 500-kilovolt power line to cross about 507 acres of agency-managed lands and a water supply pipeline that would use about 154 federal acres.

The agency analyzed both as part of a right-of-way application by Santa Monica, Calif.-based Eagle Crest Energy Co. to build the Eagle Mountain pumped storage project in Riverside County. The project would have the capacity to produce about 1,300 megawatts of electricity — enough to power about 390,000 homes.

BLM yesterday also issued a "finding of no significant impact," or FONSI, for the rights-of-way applications and the proposed amendment to the California Desert Conservation Area resource management plan.

The Federal Energy Regulatory Commission in June 2014 issued a license for the project. It can proceed once BLM finalizes approval of the rights-of-way request and of the RMP amendment, which is required because the project falls outside a designated utility corridor.

The documents are now open for a 30-day public protest period and a governor’s consistency review. Once any protests are resolved, BLM will issue a decision record, likely this summer, approving the documents. The decision record would be subject to a 30-day appeal period.

"Joshua Tree National Park is a vital source of economic benefit, a point which was confirmed by the Department of Interior’s just-released visitor spending report," Lamfrom said.

"Visitors to Joshua Tree spent more than $123 million in surrounding communities and supported 1,700 jobs in 2016 alone," Lamfrom said. "Such tremendous value and sustainable return on investment must not be overlooked."

BLM, in announcing its decision, noted in a press release that the Eagle Mountain project is "helping to create jobs with an estimated construction workforce payroll totaling $58 million."

The power line would transport electricity from the site — located on a mix of private and public lands, including 489 acres of BLM lands 30 miles west of the city of Blythe — to Southern California Edison’s Red Bluff substation on BLM lands. The water line would draw water from an area below private land, traverse BLM land and fill reservoirs at the pumped storage facility.

The project is aimed at matching the ups and downs of energy demand on the regional grid, project proponents say.

The water would generate electricity by flowing through four reversible pump-turbine units, and the transmission line would transport power to the regional grid.

But Lamfrom argued it shouldn’t be located there.

"Yet, despite the questions, facts and opposition raised, the BLM has mysteriously concluded that no significant impacts exist when considering this right of way," he said. "This decision appears to be backed by the weight of a desert mirage versus science."