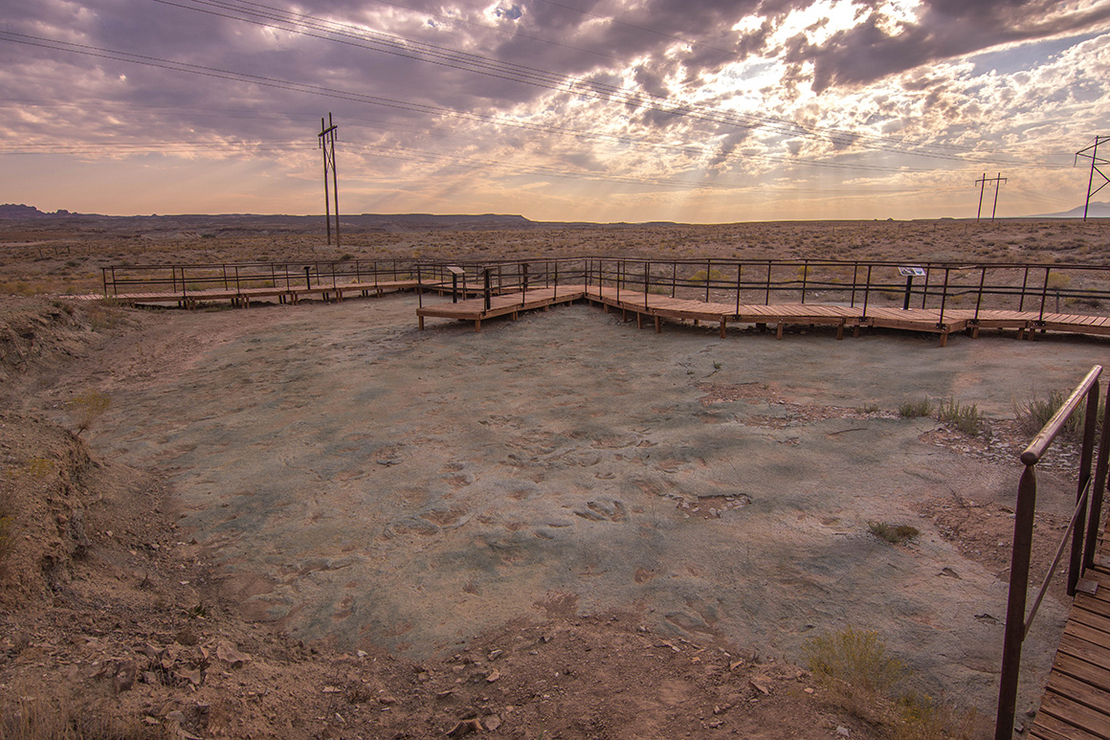 The Mill Canyon Dinosaur Tracksite, where more than 200 tracks are preserved in the ground, is shown in 2017. Wayne Hsieh/Flickr

The Bureau of Land Management is proposing a new plan to rebuild a boardwalk at Utah’s Mill Canyon Dinosaur Tracksite after a previous attempt resulted in permanent damage to priceless fossil beds.

BLM today released a draft environmental assessment (EA) outlining a plan that would carefully mark dinosaur tracks and other paleontological resources for work crews that would only be allowed to proceed under the oversight of a BLM or contracted paleontologist.

BLM is asking for public input on the proposed plan in the draft EA, and comments will be accepted through July 26.

“The maintenance and restoration of these interpretive walkways are necessary to properly protect and manage the paleontological resources at this important site,” BLM Moab Field Manager Nicollee Gaddis-Wyatt said in a statement. “We are committed to meaningful public engagement on this project moving forward.”

The goal of the revised plan in the draft EA is to replace the wooden boardwalk with a “tubular steel and concrete” walkway along a carefully marked pathway approved by paleontologists that protects the ancient resources, including more than 200 tracks dating back millions of years to the early Cretaceous time period.

That was not the case in January, when BLM construction workers removing the wooden boardwalk drove over fossil beds with a backhoe and other heavy equipment, according to damage assessment conducted by Brent Breithaupt, a bureau paleontologist based in Cheyenne, Wyo., who visited the site in early February (E&E News PM, March 30).

BLM in late January halted the project to replace the boardwalk near the dinosaur tracks while it assessed the damage that had been reported by visitors to the site.

Breithaupt’s assessment found a host of issues that led to the damage, including the failure of BLM to carefully mark the dinosaur tracks and other paleontological resources so that the work crews could avoid them.

While Breithaupt concluded that the overall “damage to the tracks and traces as the result of impacts from construction activities appears minor,” he reported that the damage likely couldn’t be fixed.

“Unfortunately, little can be done to restore broken or eroded tracks left exposed in situ,” his assessment says. “In addition, small microfractures may well have formed because of the weight of the machinery on the track-bearing surface.”

The result, the assessment concludes, is that “natural degradation may be accelerated in these areas in the future.”

Under the “proposed action” in the draft EA, access by construction crews to the site “would be established and marked for access by a BLM Paleontologist and would be the sole access route allowed during construction.”

Alan Titus, a paleontologist in BLM Utah’s Paria River District office, visited the site in April and marked the access pathway, according to the draft EA.

The draft EA states that all areas on the Mill Canyon Dinosaur Tracksite that could be affected by the project “have been surveyed for paleontological resources, and areas of avoidance would be clearly marked on maps for work crews.”

It adds: “Prior to any on-the-ground activity, crews would be thoroughly briefed by a paleontologist on the tracks and traces at the site and taught how to recognize, avoid and not impact trace fossils while installing the walkways. All areas containing tracks or other sensitive resources would also be flagged for avoidance by a BLM or contracted Paleontologist prior to the start of any work.”

In situations where the construction crews “are required to be near tracks or traces, stall mats would be utilized to protect those tracks and traces.”

BLM stopped work on the boardwalk in January just days after the Center for Biological Diversity sent a cease-and-desist letter to the bureau noting social media reports showed that “significant damage” had occurred at the Mill Canyon site, where there are more than 200 tracks dating back millions of years to the early Cretaceous time period (E&E News PM, Jan. 31).

“I’m pleased that BLM has recognized how badly they screwed up here and gone back to the drawing board to try to make things right,” Donnelly said in an emailed statement to E&E News.

The original plan to replace the wooden boardwalk unveiled last year “was perfunctory and slapdash, and the result was destruction of resources,” he said.

He said the Center for Biological Diversity is “hopeful this new assessment is the start of a new chapter in BLM’s management of irreplaceable paleontological resources.”