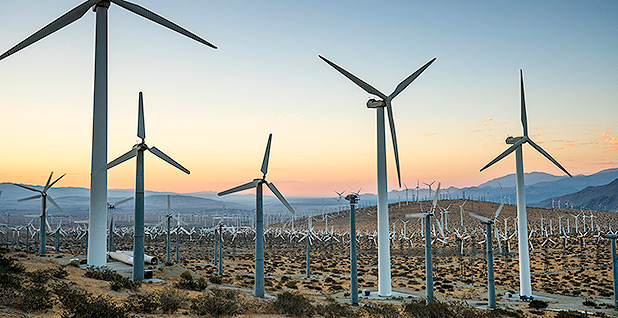 The Bureau of Land Management has proposed that the Interior Department cancel the withdrawal of more than a million acres of federal lands from new mining claims within a formally designated renewable energy development zone in the Southern California desert, multiple sources have confirmed to E&E News.

Formally canceling the two-year withdrawal from new mining claims signals the first step in a broader effort by Interior to eventually dismantle federal participation in the 22.5-million-acre Desert Renewable Energy Conservation Plan (DRECP) that it partnered on with the state of California, sources said.

Acting BLM Director Mike Nedd has submitted a draft memorandum to senior Interior officials proposing the cancellation of the withdrawal of roughly 1.3 million acres within the planning area. They were formally "segregated" last December from new mineral mining claims for up to two years while the agency conducted a detailed study to determine whether all, part or none of the proposed area should be withdrawn for 20 years.

Nedd’s draft memo argues that the cost of between $4 million and $6 million to conduct the environmental impact statement evaluating the withdrawal is cost prohibitive and necessitates a cancellation of the withdrawal, formally published in the Federal Register in December.

Interior is preparing to publish a Register notice in the coming weeks canceling the withdrawal, sources said. But another source with knowledge of the proposal said Interior Secretary Ryan Zinke has not made a final decision.

Doing so would cast the future of the DRECP, which Interior finalized in a record of decision in September 2016, in doubt.

Nedd initially wrote the memo this summer, and the idea has been under discussion at Interior for at least the past two months, sources said.

The DRECP, which includes 10.8 million acres of federal lands, took years to develop with the state of California and included detailed studies identifying 388,000 acres of "development focus areas" deemed suitable for commercial-scale renewables projects, as well as areas to be protected or managed for their recreational values that spanned nearly 17,000 square miles.

The 1.3 million acres within the DRECP were withdrawn "to protect nationally significant landscapes with outstanding cultural, biological, and scientific values from adverse effects of locatable mineral exploration and mining," according to the December Federal Register notice.

But ending the mining moratorium, which is not set to expire until December 2018, is a certain indicator that the Trump administration has no desire to continue President Obama’s unprecedented push to develop commercial-scale solar, wind and geothermal power projects, critics say.

The Obama administration’s BLM approved 60 commercial-scale wind, solar and geothermal energy projects on federal lands that will have a total capacity to produce about 15,500 megawatts of electricity — enough to power more than 5 million homes and businesses.

Of those approved projects, 36 were solar power projects, many in California.

Zinke raised eyebrows last week when he said during the Clean Energy Week conference in Washington that large-scale solar power development might not be a wise use of public land (Greenwire, Sept. 28).

"If I see solar cells out on land, that land is no longer useful for anything else but energy, but there’s a lot of roofs when you fly over," Zinke said at the conference. "And I think the greatest opportunity, quite frankly, for the solar industry is look at all the roofs in America."

An Interior spokeswoman later said the secretary was not trying to suggest solar power development should be abandoned on federal lands.

Still, a possible move to dismantle DRECP has startled some conservation leaders.

"For the Interior Department to start to unravel this plan — it defies logic, frankly," said Kate Kelly, the public lands director for the Center for American Progress.

"Zinke has said that we should look at lands in terms of watersheds and ecosystems, but there is no better example of that kind of landscape-level planning than this effort," added Kelly, who was a senior adviser to Obama’s Interior secretary, Sally Jewell. "They are beginning to dismantle a plan that offers certainty to industry and developers, something that any business-minded administration would strive for."

The move also indicates that the Trump administration will no longer prioritize commercial-scale renewable energy development projects on federal lands.

"This action is one of the clearest signals that the Trump administration is trying to stall out the nation’s momentum on large-scale renewable energy development," Kelly said.

Interior’s move would mark the second major mining withdrawal decision in the past two weeks.

As with the segregation of lands in the DRECP, the sagebrush focal areas had been withdrawn while BLM evaluated whether all 10 million acres should be removed from mining claims for 20 years. BLM is not expected to complete that EIS until next year.