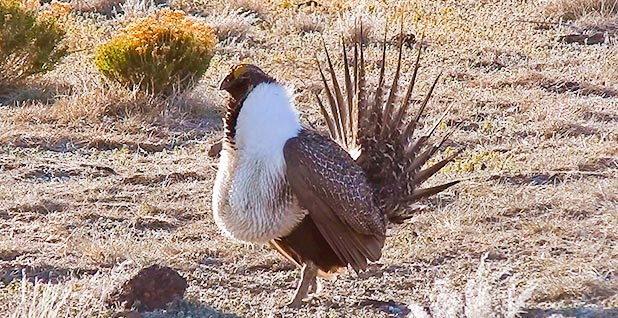 The Bureau of Land Management has quietly begun a detailed study evaluating whether to formally amend dozens of land-use plans to remove greater sage grouse conservation measures approved by the Obama administration in 2015.

BLM officials had said publicly in December they would announce by early this year whether to begin the formal process to alter 98 BLM and Forest Service land-use plans that had incorporated grouse protection measures as the centerpiece of the Obama conservation plan for the birds (Greenwire, Dec. 12, 2017).

But BLM began conducting a formal environmental impact statement (EIS) this month after issuing a final report documenting thousands of public comments the agency received. BLM stated in the scoping report this month that it "intends to consider the possibility of amending some, all, or none of the BLM land use plans."

That formal process is now underway.

"BLM is proceeding with plan amendments," the agency said in a brief emailed statement sent today to E&E News. "We anticipate completing them by the end of the year."

A BLM spokesman said the goal is to issue a final EIS, with recommendations on "possible" resource management plan amendments by December.

A task force of mostly federal regulators issued a report last year recommending potentially significant changes to the Obama-era blueprint. But the fact the EIS is underway without any announcement caught some outside observers by surprise.

"Of course, we expected after submitting comments and participating in public meetings, that there would be some type of announcement as to where the BLM is heading next," Nada Culver, senior counsel and director of the Wilderness Society’s BLM Action Center in Denver, said in an emailed statement.

"Our comments, and those of more than 100,000 other members of the public, urged the agency to maintain the plans and let them work," she added. "I guess the public is receiving the ultimate message about the agency’s interest in hearing from us if they don’t even bother to let us know that they are just moving forward to amend the plans."

The news comes as the agency has already taken steps to dismantle the plans.

BLM recently issued instruction memorandums (IMs) directing agency field staff on how to manage public lands for sage grouse. The IMs "generally retreat from the protections set out" in previous guidance to field staff in 2016.

The second IM, issued in January, eliminates requirements for public notice and comment "when conditions worsen and there is a need for action" under adaptive management provisions in the grouse plans. It also shortens the public protest period for oil and gas lease sale parcels to 10 days from 30 days (E&E News PM, Feb. 1).

But these changes have sparked controversy.

The agency came under fire from conservation groups that claimed BLM had failed to include thousands of comments urging it to protect the Obama-era plans.

BLM was forced this month to concede that roughly 42,000 public comments were not counted in the final scoping report, and blamed it on a "breakdown in technology" (Greenwire, March 12).

A BLM spokesman said today that those comments have since been added to the final report.