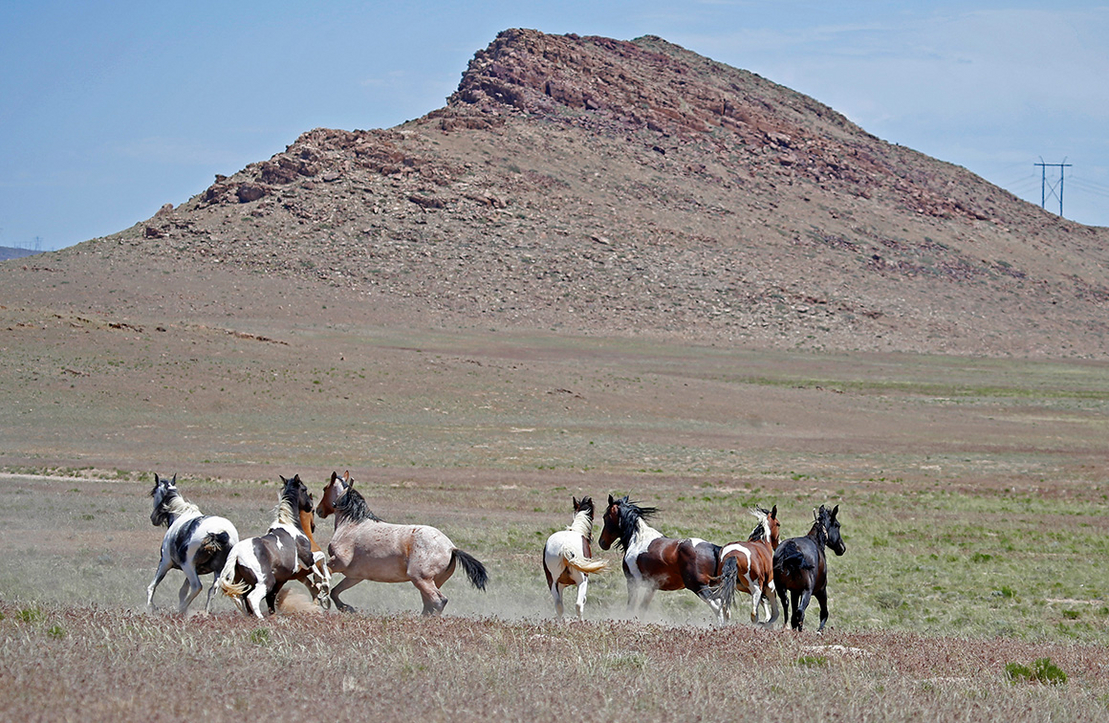 The Bureau of Land Management has scaled up roundups of wild horses and burros from federal rangelands just weeks before it plans to scale back the gathers in favor of fertility controls.

BLM in this fiscal budget cycle that began Oct. 1, 2021, has already rounded up a record 15,040 wild horses and burros, permanently removing 13,930 animals from federal rangelands, according to numbers the bureau emailed to E&E News today.

Those numbers don’t even include several ongoing wild horse gathers in play — two in Nevada’s Triple B Complex and Blue Wing Complex, and a third along the California-Nevada border at the Twin Peaks Herd Management Area — that will remove more than 4,000 wild horses and burros from overcrowded and parched federal land in both states.

On top of that, this week BLM completed a roundup event at the Piceance-East Douglas HMA in Colorado that removed 867 wild horses.

And BLM yesterday released a draft environmental assessment on a planned roundup of 190 wild horses, probably not beginning until next month, in the Bordo Atravesado HMA in northern New Mexico. There are 230 wild horses in the HMA, which can support an estimated 50 animals.

There are currently 82,384 wild horses and burros roaming 27 million acres of federal herd management areas in 10 Western states. That’s three times the maximum number of 26,785 animals that BLM says federal rangelands can sustain without causing damage to vegetation, soils and other resources.

“We conduct gathers like this to ensure the health of public lands within the complex as well as the health of the wild horses and burros in the area” due to “severe drought conditions,” said Kathleen Rehberg, manager of BLM Nevada’s Humboldt River Field Office, which is overseeing the Blue Wing Complex gather.

This weekend, BLM plans to begin a roundup to remove 450 horses from the Blawn Wash and Bible Spring Complex HMAs in Utah.

The “excess wild horses” in the two Utah HMAs “are located on semi-desert landscapes where forage and water are exceedingly scarce due to prolonged drought,” said Paul Briggs, manager of BLM’s Cedar City Field Office overseeing the roundup.

He said the gather, along with fertility control, will start to restore “a thriving and natural ecological balance to the area and maintaining that balance into the future.”

The increased roundups, both ongoing and scheduled over the next two months, trouble wild horse advocates.

Holly Gann, director of government relations for the American Wild Horse Campaign (AWHC), said in an emailed statement to E&E News that the “better way” to keep herd sizes in check is the expanded use of “humane, effective, and much less expensive fertility control vaccines that keep these animals wild and free.”

But, Gann said, BLM “continues to underinvest in this commonsense solution.”

BLM plans next year to reduce the number of animals it removes from federal rangelands to about 10,000, while increasing fertility control treatments, most likely through the expanded use of darting animals with porcine zona pellucida, or PZP (Greenwire, May 6).

That would represent less than half the 22,000 animals BLM is currently working to round up and remove this year, and smaller than the 13,666 animals it removed from federal herd management areas in 2021.

It’s not clear how close BLM is to that 22,000 target. BLM did not respond to a request for the latest number of rounded-up animals before publication.

BLM’s fiscal 2023 budget justification document prepared for congressional appropriators highlights the rising costs of housing, feeding and caring for the rounded-up animals in off-range holding pens and corrals, along with private and public pasturelands. It notes that BLM spent $77.6 million in fiscal 2021 to care for and feed the animals, representing about 64 percent of the total Wild Horse and Burro Program budget.

As of July, BLM was holding 58,800 wild horses and burros in off-range corrals and holding facilities, according to bureau data.

The three ongoing gathers in Nevada and California have already added thousands of wild horses and burros to the list of animals BLM is now caring for in off-range facilities.

BLM’s increased gathers since 2020 have resulted in a substantial reduction in the numbers of wild horses and burros on federal rangelands.

The wild horse and burro roundups have been controversial, and BLM has been hounded by allegations that its adoption incentive program that aims to place the rounded-up animals into private care has led to some new owners selling the horses at livestock auctions with known buyers from slaughterhouses in Canada and Mexico.

BLM has made adjustments to the program. But AWHC released a report last month that found those adjustments aren’t yet working.

The group says its report shows that since 2019, at least 840 animals removed from federal rangelands and adopted into private care through BLM’s adoption incentive program met that fate, providing “irrefutable” evidence that BLM has allowed “a flood of wild, untrained mustangs and burros” to be sent “into the slaughter pipeline,” said Amelia Perrin, AWHC’s investigations manager (Greenwire, July 26).

On top of that, a Colorado BLM holding facility for rounded-up animals awaiting adoption suffered an equine influenza outbreak that killed 145 horses.

A subsequent report commissioned by BLM found that the East Cañon Complex, which uses prison inmates to train the rounded-up animals to prepare them for adoption, is “understaffed in multiple capacities.” This, the assessment concluded, is affecting “the preparation, vaccination, and hoof maintenance of animals at the facility” (Greenwire, June 7).

The assessment also uncovered “several instances” where wild horses brought to the holding facility in Cañon City, Colo., had not received vaccinations, including animals “that had been at the facility for some time.”

“The BLM is wasting millions of tax dollars per month to inhumanely round up wild horses and burros with helicopters, deprive them of freedom and family, and confine them in overcrowded holding facilities to await a fate that, even in 2022, is landing far too many in the slaughter pipeline,” Gann said.

Can modern water management save the Rio Grande?