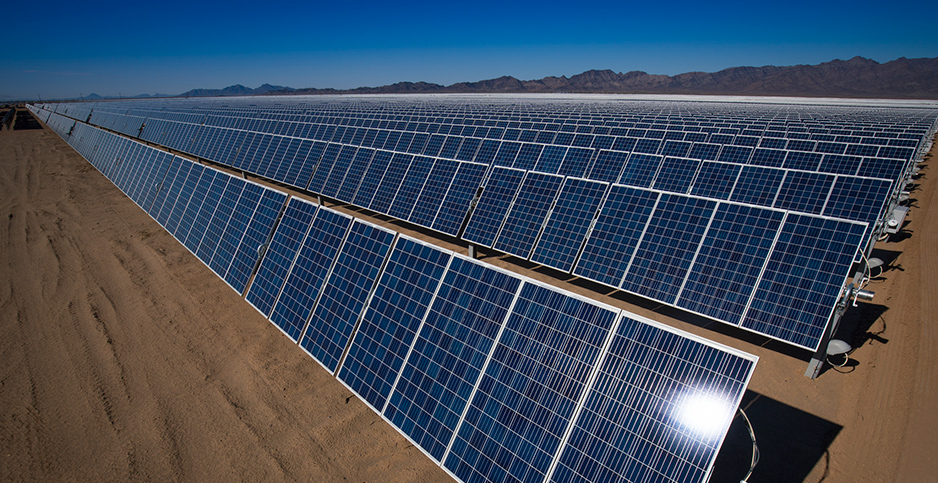 The Biden administration will study what could be the first solar power project inside a California renewable energy zone, just a week after nixing a Trump-era proposal that critics say would have undermined the intent of the zone to balance development and wildlife protection.

The proposed Oberon solar project would cover about 4,700 acres of federal land inside the boundaries of the massive Desert Renewable Energy Conservation Plan (DRECP) in Southern California.

The photovoltaic power plant would have the capacity to produce up to 500 megawatts of electricity, or enough to power roughly 200,000 homes.

The Bureau of Land Management will conduct the analysis of the project, which is proposed by a subsidiary of San Francisco-based Intersect Power, according to an advance notice in today’s Federal Register.

Once formally published tomorrow, the environmental assessment will be open for a 30-day public scoping period running through April 19.

The Biden administration has set a goal of "achieving a carbon pollution-free power sector by 2035," according to BLM press materials.

The Oberon project also comports with President Biden’s plans to follow the Obama era’s "smart from the start" planning model, which focused on evaluating entire regions and designating sections suitable for development.

The main advantage is that the section of the DRECP where the Oberon solar project is proposed has already been studied and deemed suitable for large projects, allowing for an EA to be conducted instead of a more time-consuming and expensive environmental impact statement.

The massive California DRECP — a partnership between BLM and the state of California — was finalized in 2016, and was hailed by the Obama administration as one of its crowning renewable energy achievements.

In total, it covers about 22 million acres of federal and state lands.

BLM evaluated the 10.8 million acres of federal land in the DRECP and divided it into areas where large-scale renewable development is focused, as well as other areas where conservation and recreation are the top priority.

Over eight years, the Obama administration approved 60 large-scale solar, wind and geothermal power projects with the capacity to produce 15,500 MW of electricity, or enough to power about 5.1 million homes.

The Trump administration, by contrast, approved a handful renewable energy projects, largely ignoring the DRECP until President Trump’s final weeks in office, when it moved to make significant changes to the plan.

The Oberon solar EA announcement follows the Interior Department’s move last week to ax a proposal unveiled in the final days of the Trump administration that would have removed designations inside the DRECP protecting millions of acres for sensitive wildlife habitat (Greenwire, March 12).

The Trump administration noted that the DRECP designated only about 388,000 acres of "development focus areas" deemed suitable for commercial-scale renewables projects. Too much of the area was designated for conservation, it argued when unveiling the draft EIS in January.

The Oberon solar project would sit within the boundaries of a development focus area inside the DRECP, according to today’s advance notice.

Senior Interior Department officials have insisted that the DRECP is a carefully balanced plan that can handle both wildlife protection and large-scale renewables.

Still, the Oberon project will likely require amending the California Desert Conservation Area plan "to allow solar development within the application area," according to the notice.

The project site is interspersed with desert wash land areas of critical habitat for the Mojave Desert tortoise, according to a map of the proposed project layout. Most of the solar power equipment would be fenced off.

The project would require routing a 500-kilovolt electric transmission line a little more than a mile, across U.S. Interstate 10, to an existing power substation.

"The BLM continues to play a role in meeting the nation’s energy needs through the development of renewable energy resources on public lands," said Janet Cheek, acting manager of BLM’s Palm Springs-South Coast Field Office. "We are committed to conducting a thorough review of the project and greatly value the public’s input during this process."