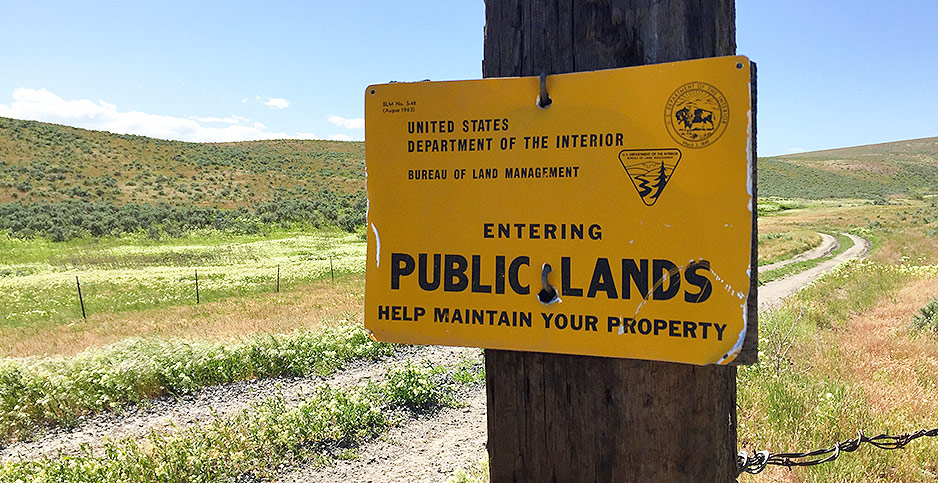 A sign marks the Bureau of Land Management border at Powder Wild and Scenic River in Oregon. BLM Oregon and Washington/Flickr

Some of the Trump administration’s sharpest critics are crying foul after the Bureau of Land Management excised boilerplate language from its news releases that describes the bureau’s mission as helping conserve public lands for future generations.

Specifically, BLM removed this sentence: "The agency’s mission is to sustain the health, diversity, and productivity of America’s public lands for the use and enjoyment of present and future generations."

Instead, the boilerplate states the number of acres of federal lands it manages, including 700 million acres of mineral estate.

"Diverse activities authorized on these lands generated $96 billion in sales of goods and services throughout the American economy in fiscal year 2017," it states. "These activities supported more than 468,000 jobs."

The original standard language, almost word for word, was still included in the "Our Mission" section of BLM’s website this morning. That section also included a "vision" statement listing the bureau’s goal of enhancing "the quality of life for all citizens through the balanced stewardship of America’s public lands and resources."

"Taking the time to strike this sentence from every press release sends a clear signal to employees and to the public that managing public lands for current and future generations is simply not a priority," Kate Kelly, the public lands director for the liberal-leaning Center for American Progress, said in an email. Kelly was a senior adviser to President Obama’s Interior Secretary Sally Jewell.

"The administration’s lack of commitment to conservation or stewardship is already reflected in how they manage public lands, whose voices they value, and how they fund the agency," she added. "Now, they’ve made it just a bit more official."

That view is shared by Steve Ellis, the former BLM deputy director of operations who retired in 2016.

"This message is, both internally and externally, what this agency is about. By removing that, what it telegraphs is we’re not about conservation, we’re not about sustaining healthy landscapes; we’re about extraction," Ellis told E&E News. "And that’s a big deal. I don’t think it sends a good message at all to pull that out."

Ed Shepard, president of the Public Lands Foundation, a BLM retirees organization, said he’s glad the language about the "health" and "diversity" of public lands is included in the bureau’s online mission statement.

But the fact "they only dropped the one sentence and just left the economic benefits" is concerning, he said.

"I do have a problem with that," said Shepard, who retired from BLM in 2012 after a 38-year career. "The economic benefits are important, but they have to be accomplished in a sustainable way that recognizes that BLM also needs to provide for other benefits and for future generations."

"BLM’s mission is to manage public lands on behalf of all Americans — including 36 million acres of National Conservation Lands — and they can’t simply erase their conservation responsibility by playing word games," he said.

Representatives with the Interior Department and BLM did not respond to requests to comment on this story.

BLM’s former boilerplate tagline can still be viewed on versions of its website stored by the nonprofit Internet Archive’s Wayback Machine. Indexed versions of press releases from last week show the "health, diversity, and productivity" language was included in those documents but has since been removed.

The change was first reported by HuffPost.