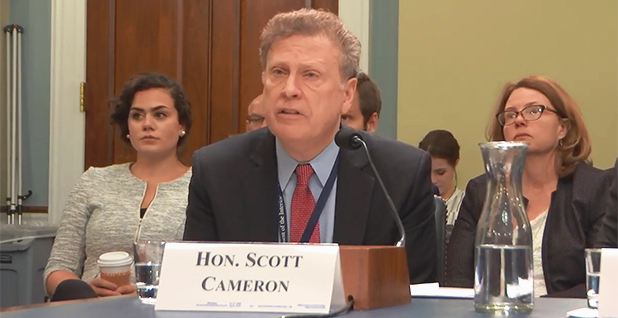 If the Interior Department follows through on its stated goal to relocate the Bureau of Land Management headquarters to a still-undetermined location out West, it will do so without the support of the bureau’s influential retirees foundation.

The Public Lands Foundation finalized a formal position statement this week, staunchly opposing the proposed move. The retirees group said the move would be expensive and unnecessary since all but about 300 bureau staff are already located in state offices out West.

And: "The perception that most BLM decisions are made in the Washington Office, far removed from local communities, local interests, and the States, is simply not based on the facts and should not be used to justify a move of the BLM HQ to the West," the statement said.

The agency is already decentralized, with a foothold in every Western state, the group said. "The BLM Field and State Offices … are already the ‘boots on the ground’ and the points of contact with local communities, local interests and the States. These BLM field managers, not BLM HQ managers, are the delegated decision-makers for public land actions."

The foundation sent out an email to its members late yesterday with a link to the finalized position statement, echoing a position the group previously shared with congressional leaders and senior Interior officials.

"The Trump Administration continues to push for moving the BLM’s Headquarters (the ‘Washington Office’) to a Western State as part of its planned reorganization of the Department of the Interior," the email said. "We disagree!"

The PLF position statement was unveiled a day after Scott Cameron, Interior’s principal deputy assistant secretary for policy, management and budget, told a House Natural Resources oversight panel that the department would decide where to relocate BLM headquarters "later this fiscal year," which ends Sept. 30 (E&E Daily, May 1).

Cameron said about 40 BLM employees would be voluntarily relocated to the undetermined location this year. He touted the economic and practical benefits of having BLM headquarters out West, where the vast majority of federal lands are located, and where bureau decisions would be "more fully informed by local conditions on the ground."

Ed Shepard, the Public Lands Foundation’s president, said the group waited to formalize the position statement until now because PLF leadership was "waiting to see what the actual plan for the proposed move was."

But while Cameron’s testimony provided some details, the plan "is still not clear," Shepard said.

"If the reason for the move is to get the decisionmaking closer to the ground, the move is not necessary," Shepard, who retired from BLM in 2012 after a 38-year career, told E&E News. "The state directors, district and field managers already have the delegated authority to make decisions at their appropriate level."

The Interior Department, in an email to E&E News, defended the proposed BLM headquarters move.

"It makes sense to have the senior leadership of the BLM closer to its employees, most of whom, are already in the West," the email says. "A small BLM staff would remain in D.C. for necessary coordination with the Secretary, [Office of Management and Budget], Congress, and national organizations based in the D.C. area."

But the PLF position statement mirrored some of the criticisms expressed by congressional leaders at this week’s Subcommittee on Oversight and Investigations hearing.

Rep. T.J. Cox (D-Calif.), the subcommittee chairman, expressed concerns that the overall Interior plan to reorganize the 70,000-employee department was "a solution in search of a problem."

"We have not seen data that there is a problem, nor have we seen a cost-benefit analysis or workforce planning data [or] comprehensive plan," Cox said at the hearing.

The PLF position statement also noted with concern there "are no data or cost benefit-analysis identifying any problems that need [to be] solved."

The position statement listed six "significant negative issues that will be created" by moving BLM headquarters.

The first is the cost associated with "moving some 300 BLM employees and securing a facility to house them," which the statement said would be "significant, diminishing operational funds for the western offices."

In addition, the "morale of those employees" relocated out West "will be significantly impacted," it said.

The relocation would also place BLM at a disadvantage with other Interior bureaus, the group said.

"The daily in-person interaction and coordination with DOI officials, White House staff, Congressional members and staff, and other governmental and non-governmental entities will be very limited leaving [BLM] with little or no legislative or policy input," it said.

Instead, if Interior is serious about improving BLM operations, it could start by "relinquishing control over some of the extraordinary and unnecessary reviews and oversight." One example is allowing BLM state directors to "issue routine" Federal Register notices "without the burdensome review and approval currently required" by the department, the statement said.

"This simple change alone would result in substantial improvement in efficiencies," it added.