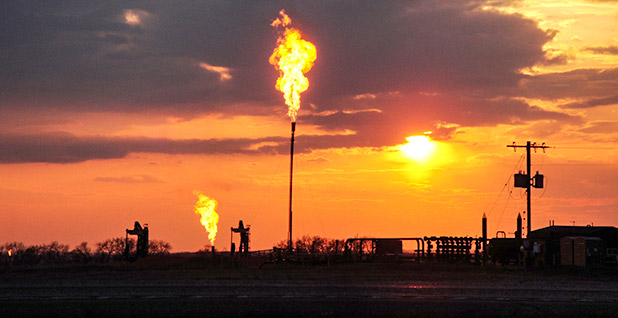 Proposed changes to Obama-era restrictions on gas venting, flaring and leakage from energy operations on public lands have been touted as revisions, but for some rule-watchers, the modifications look a lot more like rescissions.

The Bureau of Land Management has shared the language of a proposed rule scheduled to appear in the Federal Register this week (Energywire, Feb. 13).

BLM’s move was expected. The Obama rule, which was finalized in November 2016, survived a lengthy battle in Congress early last year. After the Congressional Review Act push failed, the Trump administration swiftly began a multistep effort to suspend most of the regulation’s provisions.

Republicans in Congress and some members of the oil and gas industry fought the Obama rule, on the grounds that its costs outweigh the benefits. That’s true, even according to the previous administration’s own analyses — unless the climate impacts of releasing methane into the atmosphere are taken into consideration.

BLM has not released a climate analysis for its latest proposed rule, but a report published alongside its proposal to suspend the 2016 rule severely discounted the social costs of emitting a potent greenhouse gas (Energywire, Oct. 5, 2017).

"We’re just very glad that this proposed rule has come out right before the hearing for the preliminary injunction," said Western Energy Alliance President Kathleen Sgamma, referring to the next round of litigation on the rulemaking (Energywire, Dec. 20, 2017).

This week’s announcement marks a new phase in the Trump administration’s process of dismantling the rule, ClearView Energy Partners LLC wrote in a research note yesterday. The group has largely placed the administration’s deregulatory endeavors in two buckets: "rip-it-up" and "write-it-again."

BLM’s rules on hydraulic fracturing and methane emissions have typified that divide. While the bureau put its methane emissions rule on ice, it has altogether rescinded its fracking guidance. If the fracking rule repeal survives legal scrutiny, that could signal a new era for the administration’s rule-busting campaign, ClearView has said.

But the proposed rule appears to be a "rip-it-up" attempt disguised as a "write-it-again" approach, the group’s analysts wrote.

"The proposal takes the form of a ‘new’ rule, but it would erase significant provisions," the ClearView note says.

BLM would remove at least seven elements introduced under the Obama rule. Gone would be requirements for companies to create waste minimization plans. Constraints on well completion and pneumatic controller replacements would disappear.

Alexandra Teitz, a former BLM official who helped write the 2016 rule, said flexibility for operators was built into many of those requirements.

"For example, before drilling, a producer had to come up with a plan to minimize waste, but the plan wouldn’t be enforceable," she said. "Most of the rule’s requirements would not apply if an operator showed that compliance would cause them to cease production on the lease."

In the eyes of the Obama rule’s supporters, industry benefits are coming at the expense of taxpayers, who own the resource that is being lost on public lands.

"By derailing the implementation of the 2016 methane waste rule, [Interior Secretary Ryan] Zinke chose to dismiss the very real issue of natural gas waste from oil and gas operations on federal lands, perpetuating the problem and the loss of federal royalty revenue," Ryan Alexander, president of Taxpayers for Common Sense, said in a statement yesterday. "This is a far cry from the administration’s purported goal to provide taxpayers with a fair return for public resources."

Obama’s BLM introduced its rule partly in response to feedback from the Government Accountability Office (GAO) that the Interior Department’s safeguards against fraud, waste and abuse were deficient (Energywire, Feb. 27, 2017).

"This rule could make sense only if you think there’s no waste problem," Teitz said. "But BLM estimated that producers flared, vented and leaked over 460 billion cubic feet of gas from 2009 to 2015 — enough to supply 6 million households for a year. The nonpartisan Government Accountability Office called out the waste problem and urged BLM to act. And the proposal doesn’t claim these quantities of gas aren’t being lost."

GAO has previously told E&E News that it is holding off on examinations of Trump-era regulatory changes until their final versions take shape.

ClearView analysts predict a final rule will be published in the second or third quarter of the year, well before the January 2019 deadline BLM set for itself in its proposed suspension of the Obama rule.

Final revisions could come before expected changes to separate U.S. EPA methane standards — the existence of which provides part of BLM’s basis for largely suppressing the 2016 rule.

Rescissions at EPA could become "less of an option" if BLM retains that rationale, according to ClearView.