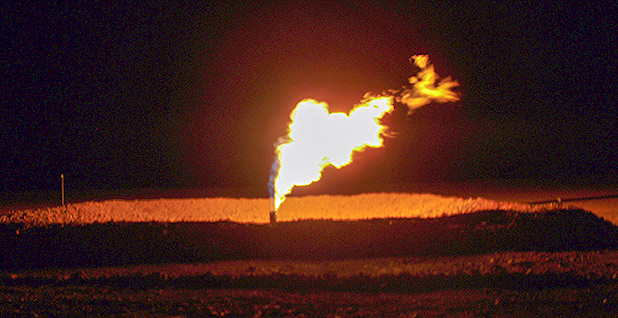 The Obama administration’s plan to cut methane emissions on public lands will take effect as scheduled today after a federal court last night rebuffed industry and state attempts to block the rule.

The U.S. District Court for the District of Wyoming denied requests from two industry groups and three states, which had asked for a preliminary injunction halting implementation of the Bureau of Land Management’s new rule to slash methane emissions from oil and gas operations on public and tribal lands.

Meanwhile, a large coalition of environmental groups and the states of California and New Mexico joined the litigation on BLM’s side, defending the waste reduction and air quality benefits of the regulation.

The challengers say the rule is costly, duplicative and beyond BLM’s authority because it is essentially an air quality regulation that falls on U.S. EPA’s and states’ turf. They asked Judge Scott Skavdahl — who froze and ultimately struck down the Obama administration’s hydraulic fracturing rule last year — to pause the methane rule while the litigation moves forward (Energywire, Jan. 9).

He expressed serious concerns about the methane rule’s overlap with EPA and state regulation of air quality issues, noting that the rule was promulgated not under an environmental statute but under the agency’s authority to prevent waste of resources.

He also raised red flags about the agency’s use of a "social cost of methane" metric in a rule crafted under the agency’s authority over resource conservation.

"Moreover, it appears the asserted cost benefits of the Rule are predominately based upon emission reductions, which is outside of BLM’s expertise, and not attributable to the purported waste prevention purpose of the Rule," he wrote in yesterday’s decision.

Still, he concluded — somewhat reluctantly — that Interior was entitled to Chevron deference, a legal doctrine under which courts typically yield to an agency’s reasonable interpretation of ambiguous statutes.

He contrasted the case to BLM’s fracking rule, which he enjoined after concluding that Congress had specifically removed the oil and gas extraction technique from the agency’s authority.

Under the second step of a Chevron analysis, he continued, he must accept an agency’s reasonable interpretation of law, even if it differs from his own.

"[A]t this point, the Court cannot conclude that the provisions of the Rule which overlap with EPA/state air quality regulations promulgated under [Clean Air Act] authority lack a legitimate, independent waste prevention purpose or are otherwise so inconsistent with the CAA as to exceed BLM’s authority and usurp that of the EPA, states, and tribes," the decision said.

"Additionally, though there are undoubtedly certain and significant compliance costs attached to the Rule, which are unrecoverable from the federal government, the Court is not convinced that these costs are of ‘such imminence that there is a clear and present need for equitable relief to prevent irreparable harm,’" he wrote.

"BLM’s standards require companies to take common-sense steps to curb this waste, like monitoring and fixing leaking equipment, and create a level playing field for energy development," Earthjustice attorney Robin Cooley, who is representing the coalition, said in a statement. "We are pleased that the court is allowing the new standards to take effect."

"The judge’s decision today to deny a preliminary injunction means that these common sense protections will take effect as planned, with cross-cutting benefits for rural communities," he said in a statement. "BLM’s standards will help prevent the waste of valuable natural gas, and that will increase money that can be used for schools and important infrastructure while simultaneously helping to protect the health of communities living in close proximity to oil and gas development."

"While we are still reviewing the opinion, upon a first read, the Court appears highly critical of fundamental portions of the rule and BLM’s rationale on waste prevention grounds — at one point calling the agency’s justification arrogant," industry attorney Eric Waeckerlin, of Davis Graham & Stubbs, said in an email. "Much of the opinion reaffirms the core air quality nature of this rule, and we must remember that a preliminary injunction remains an extraordinary remedy.

"So while we are disappointed in today’s outcome, we remain optimistic that the court will invalidate the rule during the merits portion of the briefing this spring," he said.

"While we’re disappointed that we didn’t convince the judge to stay the rule at this time, we remain confident that when he considers the full merits of the case he will agree this rule is unlawful federal overreach," she said in a statement.