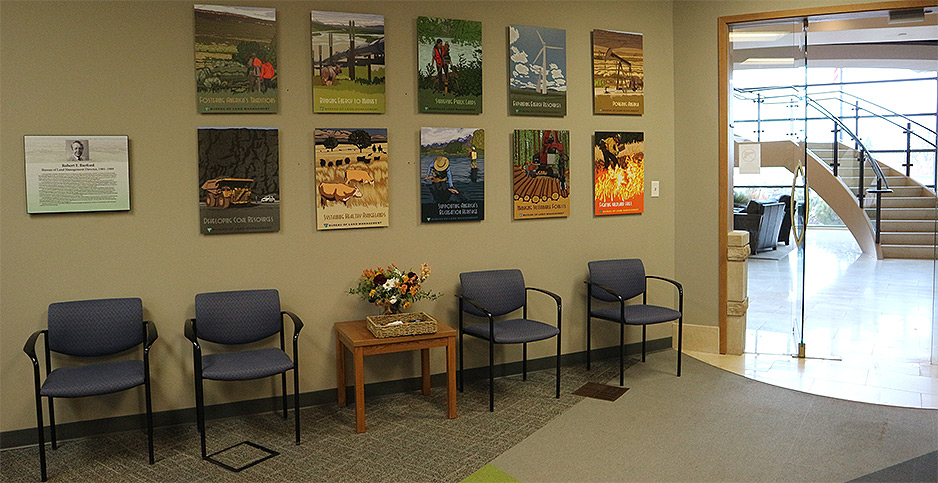 A handful of Bureau of Land Management employees in Colorado have been temporarily reassigned to BLM’s new headquarters in Grand Junction, Colo., to give the appearance that the office is occupied and busy, bureau sources have told E&E News.

A dozen or so employees last month began temporarily working in the new building, first from the nearby Grand Junction Field Office, which includes staffers in the Southwest District Office, according to multiple BLM sources with knowledge of the situation.

BLM recently reassigned two other employees to the new headquarters from its Colorado River Valley Field Office in Silt, Colo., some 60 miles northeast of Grand Junction, a BLM source said.

"The temporary local staff move is a minor misuse of tax dollars and probably also a minor disruption to normal workflow, but I think noteworthy for the deception," a BLM employee who asked not to be identified told E&E News. "It does, however, allow BLM to truthfully say HQ staff are already working in Grand Junction.

"It is unclear to me who this charade is supposed to impress," the employee said.

BLM defended the temporary reassignments in a statement to E&E News.

"Local staff helping in the new headquarters are predominantly doing their everyday jobs but are present and available to help BLM personnel rotating in as we get settled," the statement read. "It has been fantastic having them there to help out and their support has been invaluable."

But some BLM employees questioned the value of the moves, which coincided with BLM acting chief William Perry Pendley opening the new Robert F. Burford Bureau of Land Management Headquarters early last month. BLM is moving at least 27 Washington-based staffers to Grand Junction as part of a controversial reorganization plan.

Pendley, BLM Deputy Director of Operations Mike Nedd and other senior leaders have been rotating between the Grand Junction office and D.C. on two-week rotations.

"I think the main thing was they didn’t want Mike and Pendley to be there and no one else," said another BLM staffer, who also questioned the use of staff time and resources.

The move to shuffle employees to the largely empty Grand Junction office comes amid increased scrutiny from congressional Democrats and other critics over the merits of relocating BLM’s headquarters to Colorado and another 220 or so D.C.-based positions to state offices across the West.

The Government Accountability Office is investigating the move at the request of House Natural Resources Chairman Raúl Grijalva (D-Ariz.). GAO is focusing, in part, on the number of staffers leaving the bureau and efforts by BLM to fill those vacancies.

BLM has struggled to fill senior positions that are moving to Grand Junction (Greenwire, Feb. 5).

But BLM has defended the relocation, saying it will place decisionmakers closer to the 245 million acres the bureau manages and the people who are most affected by their decisions.

BLM did not allow an E&E News reporter access to upper floor offices where the staff would be located. This area was being renovated to accommodate the 27 to 40 or so staffers expected to move there by this spring.

"The purpose of this transition period is to help identify any needs we may have (security, badges, phone directories, copiers, computers, telecommunications, renovations, etc.) to make this facility a well-functioning, efficient headquarters," BLM said in its statement.

It added: "BLM headquarters employees who are currently rotating through Grand Junction while we transition are also doing their normal work while there. In doing this, we are able to test things like communications capabilities and office efficiencies in the new space to determine what will be most effective."

‘An appearance of staff’

But some BLM employees, agency observers, and other current and former officials pushed back against the effort to fill the new office with temporarily reassigned employees.

One former senior Interior Department official called the temporary reassignments a waste of time at best and a waste of taxpayer resources at worst. BLM, the source said, was "playing this kind of office workspace rearranging game for political optics."

Employees were originally asked at a Grand Junction Field Office staff meeting late last year if they would volunteer to temporarily occupy the HQ building roughly a city block away from the field office, a BLM staffer told E&E News on condition of anonymity.

So roughly eight staffers from BLM’s Northwest and Southwest district offices who were already working in Grand Junction began moving into the headquarters early last month "for the appearance of Washington BLM Headquarters activity and meetings," a bureau source said.

Apparently, "that was not deemed enough" staff, so at least two other staffers from the Colorado River Valley office in Silt were asked to work out of the new headquarters once a week.

The moves have caused problems with some staffers, including two BLM law enforcement officials who are stationed at the Grand Junction Field Office.

"As the new HQ building space lacks secured areas for evidence, firearms and ammunition, their move across the street has been postponed," a bureau source said. "It has been an on-again/off-again story for them. Clearly someone is quite interested in having an appearance of staff in the building."

That source also questioned the ethics of the reassignments.

"Federal employees are required to take annual ethics training which always include a section on the simple appearance of wrongdoing. That is, if it is technically legal but might appear poorly to the public, don’t do it," the source said. "I believe that clearly moving staff to a nearby office using tax dollars simply to offer an appearance of activity and action does not pass the DOI ‘appearance’ ethics test."