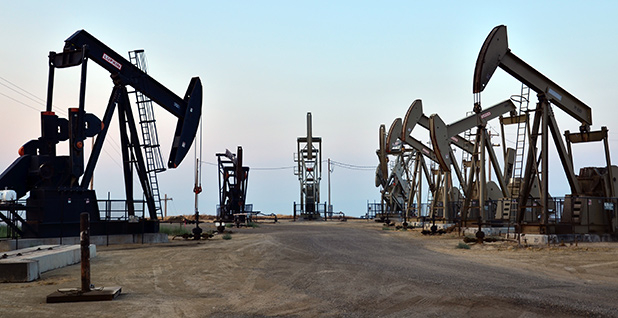 Oil and gas drilling in California. Bureau of Land Management

The Bureau of Land Management has hired a senior Forest Service official to oversee onshore energy and minerals development on bureau-managed lands.

A Forest Service spokeswoman confirmed that Douglas has left the service for the new BLM position. A separate Forest Service source said he started at the bureau yesterday.

BLM issued a statement to E&E News lauding his "expertise and experience in managing both mineral resources and staff" and saying his knowledge of the issues "will be an asset to the Bureau."

Douglas’ hiring helps reduce the number of key administrators serving in an acting capacity, which one source said is a goal of Interior Secretary David Bernhardt. Before Douglas, six of the seven BLM assistant directors were serving on an acting basis.

Douglas steps in at a time when BLM’s commitment to increased oil and gas leasing and development on federal lands has come under fire from congressional Democrats.

Douglas will replace Mitchell Leverette, who filled in as the acting assistant director of energy, minerals and realty management after Mike Nedd was promoted to deputy director of operations (Greenwire, April 10).

Douglas and Leverette, a geologist by training, both have extensive experience in managing oil and gas and minerals on federal lands. They will now occupy prime roles in the Trump administration’s ongoing push to achieve "energy dominance" by developing fossil fuels on federal lands.

Douglas, as director of the Forest Service Minerals and Geology Management program, oversaw a program that administers "mineral exploration, development and reclamation activities" on national forest lands, according to the service.

The program staff works closely with BLM and state agencies to manage production of mineral resources such as gold, silver, copper, lead and zinc, as well as coal and oil and gas. The program also "investigates and remediates" abandoned mines in national forests and grasslands.

Oil and gas valued at more than $1.2 billion was developed on Forest Service-managed lands in fiscal 2017, resulting in about $145 million in royalty payments and other fees "to local, state and federal governments," the service said in a description of the program.

Douglas also has an extensive history at BLM and the Forest Service, stretching back more than two decades.

That’s a big plus in his favor, said Ed Shepard, president of the Public Lands Foundation, a BLM retirees organization.

"Having experience with BLM and the Forest Service is an advantage because both agencies work together on mineral and energy issues on National Forest System lands," said Shepard, who retired from BLM in 2012 after a 38-year career.

Though he never worked with Douglas, Shepard said Douglas "is well-qualified by background and experience for that job."

Douglas served as manager of BLM’s Anchorage District Office in Alaska between 1995 and 1998, and then as manager when it was designated the Anchorage Field Office in 1998 and 2000.

He later served as a BLM senior adviser in the Obama administration on energy development issues, including oil shale research and development and leasing with Nedd in the bureau’s mineral and realty management program, records show.

Prior to joining BLM, Douglas worked in the private oil and gas industry for 18 years.