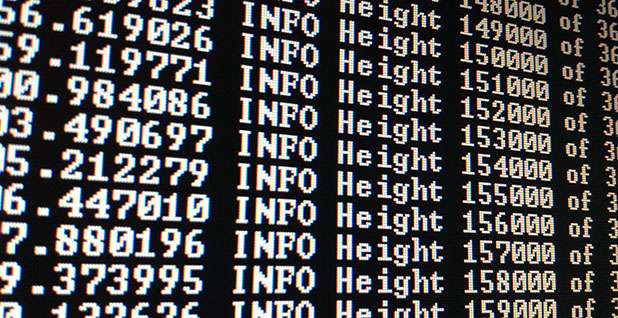 Blockchain technologies act as a record of transactions that gets distributed across the users of a given system. deavmi/Wikimedia Commons

A virtual ledger that serves as the foundation for bitcoin and other cryptocurrencies is attracting increased attention and funding dollars from large energy companies and the U.S. government, who are curious about its potential application to the grid.

Blockchain technologies, in their various iterations, act as a record of transactions that gets distributed across the users of a given system, rather than in the hands of a single intermediary that controls access. Its champions see it as nothing less than the basis of nearly every kind of transaction in the not-so-distant future, cutting out middlemen who mediate everything from business contracts to banking to music sales.

Already, the ledger has plenty of indie cred and fans overseas. In one project launched in Brooklyn, neighbors buy and sell excess solar energy produced on nearby rooftops. Almost two dozen utilities based in Europe have signed on to use a German-made software called Enerchain, linking them to a blockchain ledger for peer-to-peer transactions. The project’s first transactions took place last week. Several other European energy companies are working with the Rocky Mountain Institute and a tech developer to identify the most promising uses. And this month, Australia’s biggest power utility kicked off a trial run of a blockchain consumer-data platform.

Energy experts think it could be attractive in wholesale electricity markets because it could smooth out the fluctuations that often accompany renewable sources and provide utilities with quicker payment and a real-time measure of demand. By knocking brokers out of the equation, too, it might also cut down on the costs of transactions.

In a July report from PricewaterhouseCoopers, the firm highlighted it as an emblem of swift technological change, saying it was considered "the biggest digital disruption for our clients in the next five years."

But few energy experts feel very confident just yet about how the open ledger used in artisanal-style solar projects — or rural areas in poor countries — might develop into the foundation for the mammoth grids of the industrialized world.

Other analysts have made forceful cases that blockchain’s reputation as a cog-in-the-wheel disruptor tends to be overstated. Far from sweeping out the rug, wrote Harvard University business professors Marco Iansiti and Karim Lakhani last spring, the ledger will seep into the foundations of economic and social systems over the course of decades.

U.S. utilities, too, are for the most part waiting on policymakers to give them incentives to foster links with consumers who get their power from somewhere other than wholesale markets.

Utilities are "very much in the cost-of-service mindset," said Michael Mylrea, who manages electricity-grid cybersecurity at the Pacific Northwest National Laboratory (PNNL) in Washington state.

"I think the word here, really, is resilience," he said. "Our grid right now is fragile. It’s all interconnected. Old legacy devices on there mixed with new technologies and a distribution level that lacks a strong cybersecurity requirement. That keeps me up at night."

Blockchain’s cybersecurity advantages are earning it federal attention in the U.S. Last month, the Department of Energy announced a multimillion-dollar award for research and development to six companies — including PNNL, where Mylrea is serving as lead investigator — into blockchain-based solutions that would make the energy grid less vulnerable, especially at the level of the smart devices and software that work farther away from the traditional centers of energy generation.

Tomicah Tillemann, a former State Department adviser on tech innovations for civil society who now leads blockchain initiatives at the New America Foundation, said the merits of blockchain are in its wide distribution and inalterability of the data.

"The way we store information now, we put all our data into a single house, put all the locks on the door and hope no one picks those locks," he said.

"Blockchain effectively distributes the access to information across thousands of houses all over the world," he said. "The only way to get into the system is to pick the locks of all of those houses at exactly the same time, while all the houses are watching each other to make sure no one’s picking the locks.

"We’re about to enter a stage where people are willing to accept that it works, and now they want to know what it can do for them," he added. "That’s when the scope of adoption and scale of innovation take off."