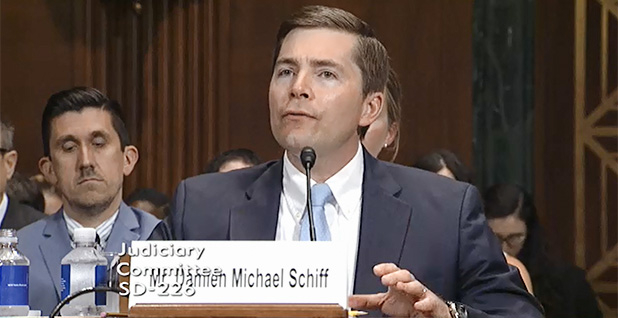 President Trump’s nominee for the U.S. Court of Federal Claims is facing stiff opposition from both Democratic senators and environmental groups.

At his confirmation hearing yesterday, senators grilled Damien Schiff about his past blog posts, including a 2007 piece in which he called Justice Anthony Kennedy a "judicial prostitute," and his affiliation with the conservative Pacific Legal Foundation.

The hearing came as several environmental and progressive groups called on senators to reject Schiff’s nomination.

"He lacks the proper temperament to serve in the judiciary," League of Conservation Voters President Gene Karpinski wrote Tuesday night in a letter to senators.

"Schiff has spent much of his career fighting environmental protection," AFJ President Nan Aron said earlier this week, adding that AFJ was especially concerned that Schiff — who is only 38 years old — "could serve several terms or even a lifetime on the federal bench if he’s promoted to a higher court."

In May, Trump nominated Schiff for a 15-year term on the claims court, which hears monetary cases against the government, including claims that the government took private property without just compensation (E&E Daily, May 9).

Schiff has been an attorney for the Pacific Legal Foundation, which often brings cases against the government on behalf of property owners, since 2005. He’s a staunch defender of private property rights and a critic of expansive federal water and endangered species regulations.

Schiff represented Mike and Chantell Sackett of Priest Lake, Idaho, in a 2012 case in which the Supreme Court ruled 9-0 that property owners facing potential enforcement actions under the Clean Water Act could seek judicial review before being forced to comply (Greenwire, March 21, 2012).

He also opposed the Obama administration’s Clean Water Rule, which aimed to clarify which wetlands and streams receive automatic protection under the Clean Water Act, as an overreach.

Over the past decade, Schiff has written extensively on environmental law and other legal topics, a fact highlighted on the questionnaire he submitted to the Senate Judiciary Committee.

Schiff’s 2007 post about Kennedy in his now-defunct personal blog "Omnia omnibus" garnered the most attention among progressive groups in the run-up to yesterday’s hearing.

In it, Schiff dissected an analysis of the 2006 term of the Supreme Court that cast Kennedy as a swing vote.

"It would seem that Justice Kennedy is (and please excuse the language) a judicial prostitute, ‘selling’ his vote as it were to four other Justices in exchange for the high that comes from aggrandizement of power and influence, and the blandishments of the fawning media and legal academy," Schiff wrote.

Schiff said that he was trying to make a more general remark about the style of judging that the legal media attributed to Kennedy and that he regretted ever using the language.

"The language that I used I acknowledge to be intemperate and uncharitable, and I do not defend it," Schiff said.

He also said that neither the views expressed in his blog nor the positions he’s taken as a lawyer at PLF would be relevant to any issue that would come in front of him on the bench as a judge.

But his comments didn’t appease Democrats, who said they were still concerned about the Kennedy post and a 2009 piece titled "Teaching ‘gayness’ in public schools" that was critical of an anti-bullying program in a California school district.

"How do you say that’s a door that you are closing and that a whole new Damien Schiff is going to emerge in black robes," Sen. Sheldon Whitehouse (D-R.I.) said, "and all of the things you’ve said in the past don’t matter and aren’t things that you can be held accountable for?"

Schiff was not the only nominee to find himself in the hot seat over things he wrote online in the past. Democratic senators also yesterday grilled Trump appellate court nominees Kevin Newsom and John Bush over prior posts on abortion, separation of powers and birtherism.

Even Sen. John Kennedy (R-La.) expressed some exasperation about the trail of written material following the nominees.

"What is it about your generation that you think you have to write this stuff down?" he asked Schiff.

‘Level of bias that makes him unsuitable’

As Schiff faced off with senators, environmental groups upped their opposition to the nomination.

In the Tuesday letter, LCV said that it was concerned Schiff’s past positions and statements "reveal a level of bias that makes him unsuitable for the judiciary."

The group said it was particularly concerned about Schiff’s opposition to the Endangered Species Act and PLF’s aggressive filing of lawsuits alleging that a government entity has illegally taken private property.

Though Schiff is not directly involved, PLF is currently representing a Wisconsin family in a high-profile property rights case pending in the Supreme Court.

He predicted that Schiff would rule in favor of property owners "in 90 to 99 percent of cases that come before him."

"Schiff is basically going to try to shut down the administrative state by forcing agencies to pay for everything that they do which affects private property," he said.

‘A passion for the law’

But Jim Burling, the Pacific Legal Foundation’s director of litigation, said in an interview earlier this week that the comments made by environmental groups about Schiff "don’t square well at all with him."

"Damien is somebody who, before getting into a case, looks at all angles," Burling said. "He’s committed to searching for the truth and comes into this with a passion for the law, getting it right."

Burling was the person at PLF who chose Schiff to head up the successful 2012 Sackett Supreme Court case. He said he tapped Schiff "even though he was hardly the most senior attorney" because of his "enthusiasm and intellectual chops."

That case has transformed how federal agencies go about handing out Clean Water Act compliance orders, he said.

"Now landowners, because of Sackett, have the ability to go to court if they have a compliance order," Burling said.

Paul Campos, senior vice president of government affairs at the Building Industry Association of the Bay Area, also defended Schiff’s record, saying the nominee had a "judicial temperament" and is "even-keeled and thoughtful."

Schiff has represented the building industry group in several cases, all running along the theme of urging robust judicial review of government decisions and enforcement of protections for property owners and home buyers and renters.

"I’ve always been very impressed by his care in not being overzealous to the point of ever taking a position that wasn’t supportable by the precedent or the statute," Campos told E&E News.

Among the most recent cases was a lawsuit challenging the Obama administration’s critical habitat protections for the threatened green sturgeon. The group, though, lost that case, and the Supreme Court earlier this year declined to take it up.

At his confirmation hearing yesterday, Schiff said that the litigation he’s brought under environmental laws stems from a desire to balance environmental protection with property rights.

"And chief among those is the right to private property."