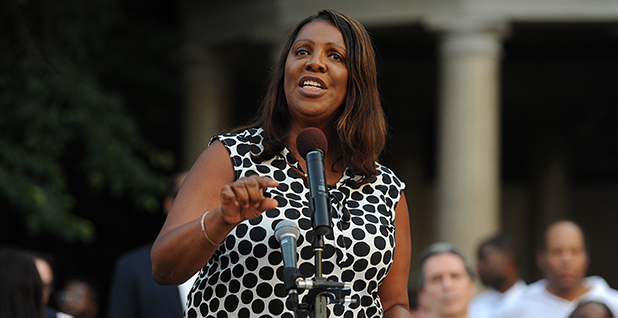 EPA’s ACE rule, designed to replace the Obama-era Clean Power Plan, neglects the agency’s obligations to recognize climate science and to conform to the federal Clean Air Act, the coalition will argue in a lawsuit today in the U.S. Court of Appeals for the District of Columbia Circuit.

"Without significant course correction, we are careening towards a climate disaster," James said. "Rather than staying the course with policies aimed at fixing the problem and protecting people’s health, safety, and the environment, the Trump Administration repealed the Clean Power Plan and replaced it with this ‘Dirty Power’ rule."

James and the other state and local officials in the coalition say the ACE rule undercuts state efforts to mandate clean energy generation, such as the Regional Greenhouse Gas Initiative. RGGI, a cap-and-trade program encompassing New England and Mid-Atlantic states, has significantly reduced power plant emissions while encouraging economic growth and job creation, they said.

Under the Clean Power Plan, EPA capped carbon dioxide emissions from power plants. The ACE rule contains no such limits on greenhouse gases, the key driver of climate change. Instead, the regulation focuses on efficiency upgrades at coal-fired plants as the "best system of emission reduction" (Greenwire, June 19).

Those changes could prolong the life of those facilities instead of incentivizing their replacement, ACE rule critics say.

Lawyers for the District of Columbia and the cities of Chicago, Los Angeles, New York City, Philadelphia, South Miami and Boulder, Colo., also joined the litigation.

After the Trump administration finalized the ACE rule, Clean Power Plan foes asked the D.C. Circuit to drop their earlier challenge of the Obama rule. The Supreme Court in early 2016 froze implementation of the Clean Power Plan for the duration of litigation.

The D.C. Circuit case has been on hold while Trump’s EPA completed the ACE rule.