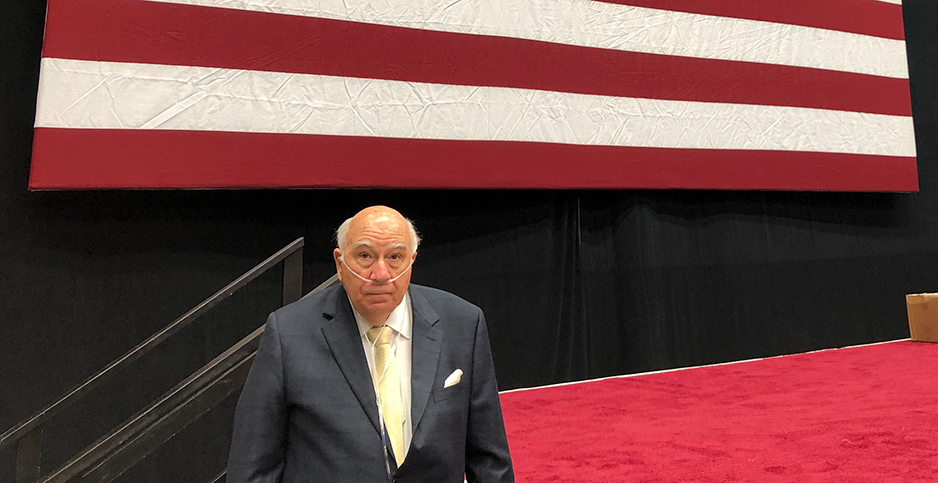 WHEELING, W.Va. — Coal executive Bob Murray is raising money for President Trump’s reelection — and he may want a few things in return.

Murray, an unabashed promoter of coal, said during an interview he again offered the president a list of policy suggestions and talking points to revive the dying coal industry at a private fundraiser Wednesday evening. Among his demands, Murray repeatedly called on the president to fix the Federal Energy Regulatory Commission.

"FERC is feckless. His FERC," said Murray, founder of coal giant Murray Energy Corp. "And I told him that."

The coal executive hosted the event for Trump’s 2020 campaign at an arena along the Ohio River. The event drew a crowd of several hundred spruced-up donors, many associated with the energy industry. Gov. Jim Justice (R) had welcomed Trump on the tarmac with about 100 "friends and family" fans.

Ten miles down the road at the arena, where Trump talked up coal to donors and posed with a small miner statue, Murray said he used the opportunity to push energy demands on the president. Among them, he charged that FERC has failed to push state regulators to buy coal power.

Trump didn’t respond, according to Murray, but the coal executive expressed confidence that the president heard him.

"Anything that gets to him, he gets it quick and he deals with it," Murray told E&E News after the event. "The problem is getting it to him. Because in that administration, there are folks that are better than other folks."

Trump told donors that former President Obama was a "disaster" for the coal industry and asserted his efforts have generated "$40 billion in relief to the American coal industry," according to the remarks at the fundraiser obtained by The Journal in West Virginia.

FERC declined to comment when asked about Murray’s remarks to E&E News. The White House did not return comment.

Murray, 79, has enjoyed a close relationship with Trump and his top energy officials. Two years ago, Murray produced an "action plan" to revive the dying coal industry (Greenwire, Oct. 10, 2017). He detailed a laundry list of policies he hoped Trump would enact. Trump has enacted some of those policies, including repealing Obama-era climate plans that would impact coal.

The relationship has been symbiotic; Trump has raked in cash, too.

Murray has been a Trump backer for years and, according to the Center for Responsive Politics, has given more than $1 million to outside groups supporting Trump.

After the fundraiser, Murray said simply the event went "very well." "My employees seemed to really enjoy it," he said.

One attendee, a Murray Energy mechanic, said while waiting in line that the company invited him, and he was eager to go. "I kind of stand behind Bob Murray and what he’s trying to do for people in this area," he said, adding, "How often do you have the opportunity to see a celebrity coming to this little town?"

‘I want to stay away’

Murray, who got his start as a coal miner, now owns one of the largest mining operations in the country. He said he goes into the office every day and is quick to point out he’s been working in this industry for 63 years.

He used to travel frequently to Washington, D.C., but he does so less these days due to health reasons, he said. He recently met with 40 U.S. senators where he tried to "help" them understand the need for coal power on the electric grid. He said the trip was exhausting, but he feels compelled to keep going. Today, coal consumption is at its lowest in 39 years, according to the U.S. Energy Information Administration.

Murray grabbed headlines in 2017 when he was photographed appearing chummy with Energy Secretary Rick Perry and other top officials. These days, Murray said he does not often talk to Perry or top DOE officials. "I want to stay away as much as I can," he said.

But that does not stop him from criticizing federal agencies, namely FERC. Specifically, he lamented that state public utility commissions spend nothing on coal-fired power plants and said that "FERC should be regulating that." He repeated "the feckless FERC" multiple times.

His bitterness dates back to the early days of the Trump administration, when Murray pushed officials to provide, in the name of national security, cash subsidies to struggling coal and nuclear plants.

Perry in late 2017 asked FERC to undertake a proceeding that could have provided cash subsidies for coal and nuclear power plants that were unable to compete and in danger of shutting down.

"That was a good plan," Murray said. "And the president told Secretary Perry get it done. He was willing, he tried."

Murray had met with Perry in March 2017 to push the idea of some sort of aid to the coal industry.

In the fall of last year, a "poorly articulated policy" from the Energy Department to boost coal and nuclear plants faltered at the White House after failing to attract support at the National Economic Council (Greenwire, Oct. 16, 2018).

The commission’s two Republicans, Chairman Neil Chatterjee and Commissioner Bernard McNamee, have said repeatedly that FERC is a fuel-neutral agency.

As recently as March, McNamee told the American Council on Renewable Energy that "I do believe that as a general proposition that markets are the best way to allocate resources and set prices."

Told of Murray’s comments, Ari Peskoe, director of Harvard Law School’s Electricity Law Initiative, said, "If this is all Bob Murray’s got, then he’s got nothing."

The 10th Amendment of the U.S. Constitution says that "the federal government can’t commandeer state officials," Peskoe said. "So Congress could not outright demand that PUCs conduct proceedings that will result in payments to coal plants," nor could FERC as he reads the Federal Power Act.

"Now is FERC going to try to do something under some fuel security banner that is going to result in coal plants getting paid? We’ll see how this plays out once [Democratic Commissioner Cheryl] LaFleur retires and whether Chatterjee and McNamee do anything like that," he said.

Environmentalists also blasted the Trump fundraiser hosted by Murray. "Trump and [EPA administrator Andrew] Wheeler have done exactly what Murray wants: rolled back the clean air and climate safeguards to help the bottom line of coal executives," the Sierra Club said in a statement.

Yet Murray is still pushing for the coal and nuclear subsidy plan to come back. "These gas wells in this area only last 10 years and then they are depleted. They start depleting in 18 months, gone in 10 years," he said. "So these wells are 5 years old now. So we have a five-year national energy policy."

Murray said he also hoped the Trump administration would reverse the endangerment finding in the remainder of this term, charging that the "whole climate change alarmism" is based on it. He said climate change "is likely happening," but not because of human activity. He pointed to an Obama-era EPA report that stated if all U.S. coal-fired power plants were closed, the impact on the globe’s temperature would be "immeasurable."

"The Vikings didn’t call Greenland Greenland for nothing," he said, arguing that climate change is cyclical.