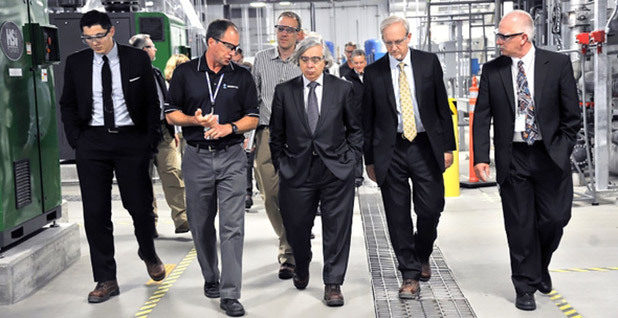 Officially, Mark Appleton is Moniz’s special adviser. But informally, he’s Moniz’s "body man," an inside-the-Beltway moniker for an aide whose duties range from supplying coffee and breaking up meetings that run too long to weighing in on important policy decisions.

The highest-profile body man in recent history was Reggie Love, a former Duke University athlete who stuck by then-presidential candidate Barack Obama on the campaign trail and during the early years of his presidency. The job has also been portrayed in pop culture through the fictional presidential aide Charlie on the "West Wing" television series and Gary, who attends to the vice president on HBO’s "Veep."

But D.C. is packed with powerful people outside the White House who rely on their own body men (and, in some cases, women).

"Every secretary … has somebody who fills that role, as does every senator and member of Congress to some extent," said Jeff Navin, a partner at Boundary Stone Partners and a former acting chief of staff and deputy chief of staff at the Energy Department.

The informal "body man" job title "is more specific and intimate than gofer, a term applied to any aide ready to ‘go fer’ coffee or do other menial tasks," wrote the late columnist William Safire in a 2001 New York Times piece tracing the origins of the term.

The earliest citation Safire found was a 1988 Boston Globe article referring to the role body men play on the campaign trail: "Every candidate has a body man, someone who fulfills a kind of mothering role on the trail. The body man makes sure the candidate’s tie is straight for the TV debate, keeps his mood up and makes sure he gets his favorite cereal for breakfast."

In federal agencies, "that position is charged with making sure that the secretary has everything he or she needs to do his or her job," Navin said. "That can be everything from tracking down briefing materials, facts, information, tracking down people both within the agency or outside of the agency who have a set of expertise to answer a question for a secretary."

Take Appleton, who’s been at DOE longer than Moniz has. He started in the secretary’s office under former DOE boss Steven Chu.

With a desk just outside Moniz’s office in DOE’s Forrestal headquarters, Appleton is a gatekeeper, wrangler and chief assistant to the department’s boss. He ensures that Moniz has what he needs for meetings, negotiates scheduling glitches and can get his boss’s attention if it’s needed urgently.

And, said Navin, "When you’ve got somebody like Mark who’s been doing this job longer than Moniz has even been secretary, you take on the role of sort of adviser and confidant." He added, "He’s going to be the last person that the secretary talks to before the meeting starts."

Not everyone in the government has one designated body man. Other agency chiefs have staffers who pitch in with logistics and travel.

EPA Administrator Gina McCarthy has a staffer who helps with scheduling and logistics when she travels, but it’s not a full-time position, according to agency spokesman Tom Reynolds.

At the Interior Department, Secretary Sally Jewell always travels with members of her U.S. Park Police security detail and usually with a communications staff member, spokeswoman Emily Beyer said. Jewell doesn’t, however, have a dedicated personal aide who travels with her to events in town and on the road.

The jobs are often filled by younger staffers looking to launch careers in government or in politics. Blake Gottesman was President George W. Bush’s body man for about four years before he left the White House to get his MBA and returned to work as Bush’s deputy chief of staff.

Appleton has been at DOE since 2011, when he was hired as a special assistant to Chu, according to his LinkedIn profile. He was previously a White House intern for five months in 2011 and worked for Arizona Democratic gubernatorial candidate Terry Goddard’s campaign in 2010. He graduated from Arizona State University in 2009 with a bachelor’s in history.

He arrived at DOE in 2011 after a stint in the White House office that handles scheduling and logistics. He described the gig as "extremely hectic," involving a mix of personnel issues, messaging and policy work.

Adams sat in on many of Chu’s meetings, kept track of his schedule, tracked down documents and shuffled people around. Sometimes, Chu even looked to him for advice.

Chu (a Nobel laureate) is "one of the smartest people I’ve ever met," Adams said. "He wasn’t asking me what sort of containment vessels we should be using for dry cask storage, certainly." But sometimes, "there were opportunities to provide input, particularly on the interpersonal side, to getting reads on people, trying to keep track of where people’s perspectives are."

The former secretary is a "great storyteller and a strong presenter," Adams added, who had "a tendency to present very long presentations." It fell to Adams to try to rein those in a little.

With Chu, the body man’s job involved hustling up nine or 10 flights of stairs from the department’s basement after the secretary parked his bicycle in the morning.

"He never took the elevator unless there was a dignitary with him or something," Adams said.

Those stair climbs turned out to be valuable time.

"It sounds silly, but because there were so many pressures on the secretary’s time … there sometimes isn’t a whole lot of time to do general catch-up — things like, would you like to go to this event, how do you want to respond to this person, do you want to have a meeting on this topic?" Adams recalled.

Some of the more mundane aspects of the job involved tracking down coffee or breakfast while the secretary was on the road. He once ordered a tuxedo jacket for Chu before an event.

But Adams — who wanted the job so he could wade into the energy policy world — didn’t mind tasks like those.

"My goal in that position is to make the secretary’s job as easy as possible and make his work move as smoothly as possible," he said. "You don’t want to put something below you because that might be something that’s very useful to do.

"Whatever you can do to contribute to the cause — and I think that’s an attitude that a lot of us had coming out of the Obama campaign … I just want to help. I want to push this rock forward. The way I’m pushing it is less specifically important."

Adams’ years at DOE helped advance his career in the energy world. He’s now the director of public affairs at the Clean Energy Trust in Chicago. He met his current boss at an event during a trip he took during his time at the department.

"It was a great experience that I think turned out very well for me in the end," he said. "I hope to have a long career in the clean energy space, so it was a great launching pad."

The gig has been a launch pad for Appleton, too.

He’ll soon be starting a new job at the State Department, Moniz recently announced. Appleton will be working as one of three assistant coordinators in a newly created office charged with heading the government’s efforts to implement the Iran nuclear deal.

"It is with mixed feelings that I share the news with you that Mark Appleton is leaving DOE and our front office team," Moniz wrote in an email to his colleagues. "This new opportunity is clearly a direct result of the significant staff role that Mark played in supporting me during the extensive negotiations on the Iran nuclear agreement between February and July in Switzerland and, in the last 19-day stage, in Vienna."

Moniz ticked off some stats about Appleton’s tenure at DOE: He traveled with the two DOE secretaries on more than 100 trips to more than 20 countries and visited 16 national laboratories and 20 DOE sites.

"I’ve appreciated Mark’s dedication to the DOE mission by taking on any task, no matter how modest or challenging, with a calm demeanor in the face of chaos!" Moniz added.