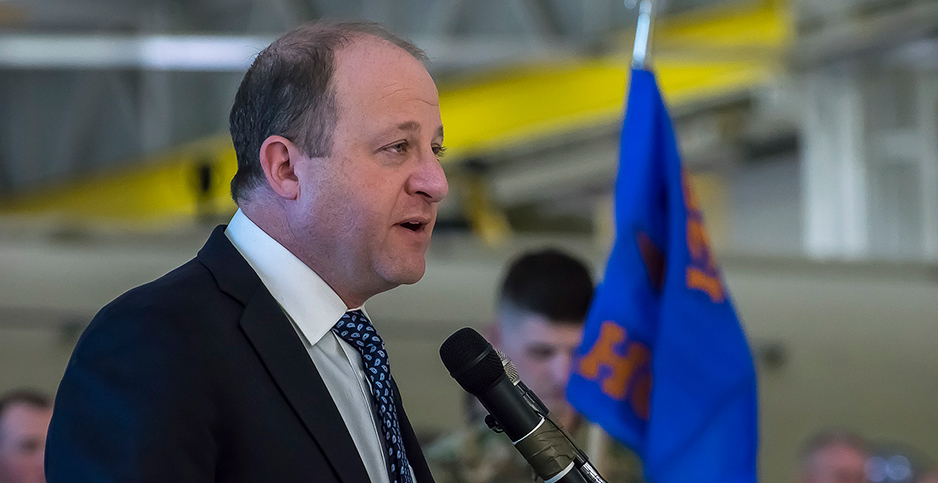 Colorado Gov. Jared Polis (D) traveled to a community solar garden in suburban Denver in May 2019 to sign a package of climate bills.

There was one to slash emissions 90% from 2005 levels by 2050, a measure requiring regulators to consider a social cost of carbon in utility planning and a requirement that the state develop plans for meeting emissions reduction targets by July 1, 2020.

"This is about the health of our planet," Polis declared before an array of solar panels. "Particularly in a state with climate-dependent industries like agriculture and the skiing industry, it’s important that we show leadership."

One year later, some environmentalists say Polis has shown little climate leadership outside such rhetorical flourishes.

A study by MJ Bradley & Associates LLC, a consulting firm, suggests the state will fall short of its interim emissions goals in 2025 or 2030. Colorado’s own analysis indicates it is on track to come up short, though officials in the Polis administration contend much progress has already been made.

Environmentalists who widely hailed the governor’s election in 2018 have grown impatient. WildEarth Guardians is preparing to file a lawsuit against the state for failing to release a plan for cutting emissions by its July 1 deadline (Climatewire, May 31, 2019). State officials say the plan will be unveiled in September.

"I don’t think it has sunk in with this administration that these goals, while justified and scientifically based, require big action and more than rhetorical commitment," said Jeremy Nichols, who leads WildEarth Guardians’ climate and energy program. "It is not enough to point to feel-good policies that nip around the edges and declare victory."

Colorado was among a handful of Democratic-led states to pass sweeping climate legislation last year. New Jersey and Maine committed to reducing greenhouse gas emissions 80% by 2050. New York enacted a law to go carbon neutral. In the West, Washington and New Mexico passed bills to eliminate emissions from power plants, while Nevada committed to upping its production of wind and solar.

Greens now say states are making uneven progress. Maine’s Climate Council has been particularly active, while New Jersey is aiming to release a report on its progress later this month. Progress has been slower in New York, where a newly formed Climate Action Council has met only once, prompting complaints from industry representatives and climate advocates alike (Climatewire, June 11). The group’s second meeting is now scheduled for the end of the month.

In New Mexico, early efforts to green the power grid have been ensnared by a debate over the future of a large coal plant in the northwestern corner of the state. State officials and the plant’s majority owner, PNM Resources Inc., ultimately prevailed with a plan to close the facility, although local efforts to keep it open by installing carbon capture and sequestration are ongoing.

Even in Washington state, where climate is a signature priority of Gov. Jay Inslee (D), progress has been disjointed. State agencies have remained focused on implementing several climate laws enacted this year, including a bill to decarbonize the electric sector by 2050, said Gregg Small, the executive director of Climate Solutions, an environmental nonprofit in the Pacific Northwest.

He praised Inslee’s leadership but noted that the state is unlikely to meet its emissions reduction targets until it passes policies to address emissions from transportation. Washington’s emissions were 97.5 million tons in 2017, the last year state data was available, or about 7.5 million tons above 1990 levels. The state is supposed to bring emissions in line with 1990 levels by this year and cut emissions 40% by 2030, according to an update passed last year.

"Our political institutions have not grappled with the scale of the challenge and have not put in place the policies to address the climate crisis," said Small. "There is a level of climate denial even amongst the most committed people working on climate change. It is just because the challenge of winning on climate is bigger than any challenge society has ever faced."

The issue has become particularly fraught in Colorado, where a rift has emerged between greens and Polis.

The governor won the election in 2018 on a pledge to transition the state to 100% renewable electricity. Polis’ clean energy pledge followed his championing of restrictions on oil and gas development in the state, though he ultimately backed away from supporting a pair of ballot measures in 2014 that would have imposed strict limits on development.

Yet the governor’s relationship with greens in office has been uneasy at times. Some were dismayed when Polis issued a signing statement last year that said the state’s plans to adopt California’s zero-emission vehicle standards and rulemakings on oil and gas emissions would fulfill the July 1 deadline for a climate plan called for under S.B. 96.

There has also been tension between environmentalists who would like to see Polis pursue a cap-and-trade program, which the governor firmly opposes, and those like WildEarth Guardians who would like the state to stop issuing permits for new oil wells.

In an interview, state officials said they were racing to implement new climate regulations even amid the coronavirus pandemic. They noted Colorado regulators have already adopted California’s ZEV standard; approved a rule requiring more frequent emissions inspections of oil and gas equipment; and a phaseout of hydrofluorocarbons (HFCs), a powerful greenhouse gas used in air conditioners and other appliances.

A study by Energy and Environmental Economics Inc. done for the state found that the laws enacted in 2019 would reduce emissions 18% in 2025, bringing the state within range of the 26% cut required that year.

"All in all, for a first year, it is a pretty substantial achievement and well in excess of what was required under the law and what the governor thought was possible," said John Putnam, director of environmental programs at the Colorado Department of Public Health and Environment.

Will Toor, director of the Colorado Energy Office, said the state was well on track to achieve an 80% reduction in power-sector emissions by the end of the decade. Xcel Energy Inc., Colorado’s largest utility, has already committed to emissions cuts of that scale. And one of the state’s largest coal burners, Tri-State Generation and Transmission Association Inc., has committed to closing its coal plants by the end of the decade.

"When we look across the utility sector, we’re on track to achieve that target of 80% emission reduction without having to create a trading program or cumbersome regulatory approach," he said.

Greens are less optimistic about the state’s progress. They pointed to the MJ Bradley study, which found that Colorado would still fall short of its climate goals even if it moved to accelerate several coal plant retirements now scheduled for the second half of the decade.

Current state policies and accelerated coal retirements would cut carbon emissions by 8 million tons, leaving the state 24 million tons short of its 2025 target, the consulting firm estimated. In 2030, the state must cut emissions 46 million tons to achieve the 50% reduction required by law. It faces an emissions gap of 25 million tons.

"We’ve taken some important first steps by adopting a reporting rule and phasing out HFCs, but there is still a significant amount of work to be done if we have any hope of meeting the 2025 or 2030 goals," said Erin Overturf, deputy director of Western Resource Advocates.

The sentiment was echoed by Pam Kiely, who works on state climate policy at the Environmental Defense Fund. To date, Colorado has pursued a set of targeted policies aimed at reducing emissions from a specific sector of the economy. She argued that those initiatives need to be accompanied by an overarching pollution reduction program like cap and trade to ensure the state delivers on its emissions goals.

"The big challenge with Colorado is stuff is moving, and that’s great," she said. "But it is out of scale in terms of the level of ambition that the statute requires."