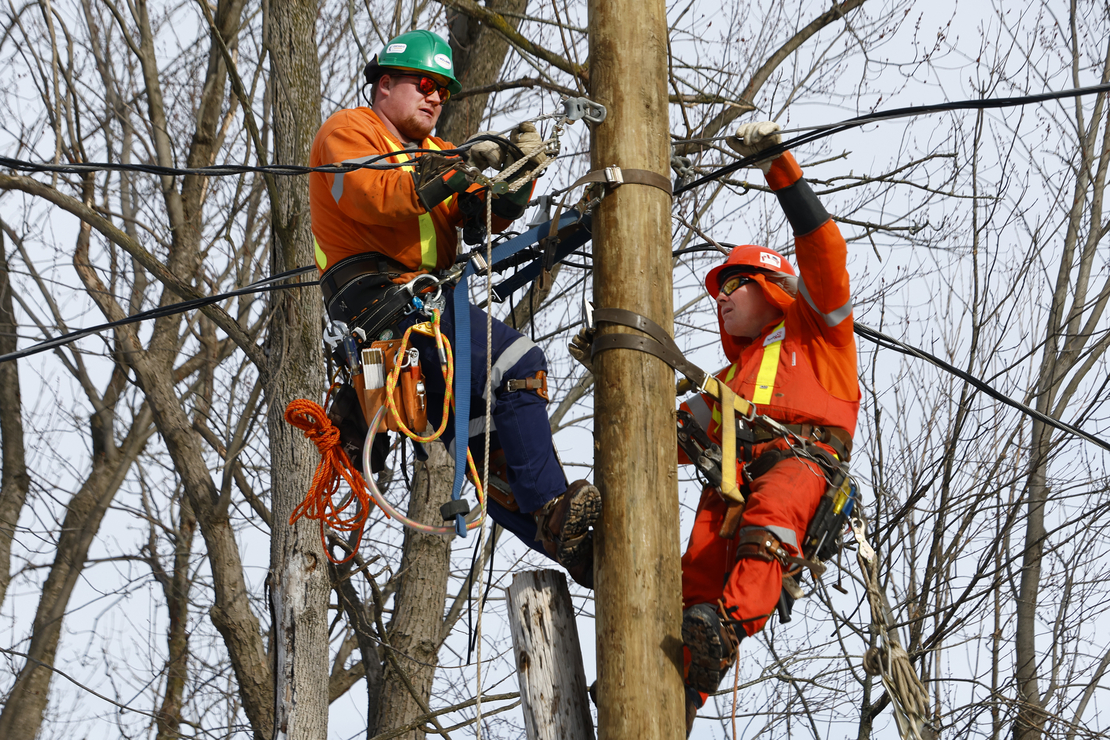 The Federal Energy Regulatory Commission and the North American Electric Reliability Corp. (NERC), the grid security monitor, are beginning a joint investigation of Winter Storm Elliott, which swept across the U.S. with deadly cold, paralyzing snowstorms and destructive winds.

On Christmas Eve, over 1.6 million U.S. customers lacked power, PowerOutage.us reported. At the storm’s peak impact, more than 60 percent of the country was under winter weather alerts, weather.com reported. That came after NERC warned in November that areas of the U.S. that face prolonged winter weather could see power supplies “seriously challenged” by harsh new storm assaults.

“The effects of Winter Storm Elliott demonstrate yet again that our bulk power system is critical to public safety and health,” outgoing FERC Chair Richard Glick said in a Wednesday news release announcing the inquiry.

“In addition to the load shedding in Tennessee and the Carolinas, multiple energy emergencies were declared and new demand records were set across the continent,” Robb said in a statement, adding that it “underscores the need for the electric sector to change its planning scenarios and preparations for extreme events.”

As the storm hit, Robb’s organization, which drafts federal grid resilience and security regulations for consideration by FERC, was in a rare debate with regional grid organizations over how far power plant owners must go to safeguard their facilities against the worst winter barrages.

The crux of the dispute involves power plant winterization rules written by a NERC standards committee and submitted in October to FERC for approval.

The proposal sets low temperature benchmarks that owners of existing and new generation must use in designing freeze protection measures to safeguard their installations.

NERC’s proposal is a part of its response to Winter Storm Uri in February 2021, which battered the central United States. Hardest hit was Texas, where generators and gas supply lines froze, cutting power to more than 4 million customers and killing over 200 people.

Initially, NERC considered tying the standard to the single lowest recorded hourly temperature in the last 50 years at each generation site.

But many of the industry officials on the standards committee objected that temperatures that low would be “arbitrary, overly conservative, and not provide reliability benefits commensurate with the cost or burden of implementation,” according to a NERC filing with FERC.

Instead, the proposed standard is an average based on a set of low hourly winter temperatures at each generator location going back to 2000.

The dispute has divided the electric power sector at its core, with the regional grid operators on one side and 70 percent of the 275 grid industry officials on the NERC standards committee — including representatives of many of the largest U.S. utilities — approving it.

To back up their objections, the grid operators — members of the ISO/RTO Council (IRC) — compared the low temperatures generators would have to meet under the proposed NERC standard with the lowest temperatures recorded between 1973 and last winter at 28 weather stations in the 13-state PJM region, which extends from mid-Atlantic states to Chicago and includes the District of Columbia.

NERC’s targets “are not indicative of the actual extreme weather conditions that units may experience in the PJM region,” the IRC said in its filing with FERC.

For example, under NERC’s formula, a power plant near the Cleveland Hopkins International Airport in Ohio would have to be protected down to minus 3 degrees Fahrenheit, the IRC said.

The lowest average in that location for any six-hour period since 1973 was much lower — minus 18 F, the IRC said. Similar spreads exist at weather stations in Washington, D.C.; Louisville, Ky.; Charleston, W.Va.; and Chicago, the IRC added.

The proposed cold weather standard for Louisville would be 4 F, the IRC said. During Winter Storm Elliott, between Dec. 22 and 23, the low temperature in Louisville plunged from 43 F to minus 6 F, according to published weather data.

Put another way, there is an average 18 F difference between the NERC proposal and the lowest temperatures recorded since 1973 at the locations in PJM, the IRC said.

NERC did not respond to a request to comment on the IRC objections.

The Tennessee Valley Authority was among the entities that turned to rolling blackouts last month, directing local power companies to reduce consumption on Dec. 23 and 24 according to a Wednesday statement.

“We are conducting a thorough review of what occurred and why,” the public power utility said. “We are committed to sharing these lessons learned and — more importantly — the corrective actions we take in the weeks ahead to ensure we are prepared to manage significant events in the future.”

TVA said the event produced the highest winter power peak in its history.

“It was also the first time in TVA’s 90-year history that we’ve had to direct targeted load curtailments due to extreme power demand,” the utility said.

Elliott’s plummeting temperatures revealed extreme cold weather vulnerability even in a region like PJM, which went into this winter with plenty of spare capacity available.

While NERC’s winter assessment in November warned that Texas, the Midwest and New England could be in trouble in an unusually severe storm, PJM predicted clear sailing.

The region said it expected to have 184,400 megawatts of available generation to meet an expected peak winter demand of 126,400 MW — a reserve margin or cushion of 46 percent, more than three times larger than NERC’s basic target.

But on Dec. 23 and 24, the cold weather knocked out as much as 45,000 MW of generation capacity that couldn’t start when called on by PJM or tripped offline while running, according to PJM spokesperson Jeff Shields, responding to an E&E News query.

A combination of plant failures, unavailable fuel and operational cutbacks caused the shortfall, but details are not yet available, Shields said.

“This depleted our available reserves for additional potential contingencies,” he said.

So PJM called on its region of 66 million people to lower thermostats and save power in other ways if they could. Even so, the need for more heating pushed peak demand to 135,000 MW on the 23rd, 10 percent more than PJM’s forecasters had expected, while the outages took generation resources down to under 140,000 MW.

“We are very appreciative of customers who responded to this call,” Shields said.

In addition to challenging NERC’s proposed temperature setting, the regional grid operators objected to another part of the NERC proposal. It offers generator owners what the IRC called a broad “opt-out” from the regulation’s requirements based on whether the owners faced “commercial” pressures to forgo the costs of winterization defenses.

“[T]hese requirements as drafted will encourage generators to avoid making improvements, particularly if a competitor elects to utilize this ‘opt-out’ to gain a competitive advantage by avoiding the capital expenditures necessary for compliance. … [T]he broad undefined ‘commercial’ exemption could lead to the exception swallowing the rule,” the grid operators told FERC.

In a response to the commission, NERC said that while it has asked the commission to approve the winterization rules, it will continue to work on the cold weather standard until October.

“The standard drafting team is presently considering many of the issues raised in the comments … and NERC may propose further changes to enhance the clarity or effectiveness” of the regulation later this year, NERC said.

NERC encouraged the grid operators and other parties “to continue participating in NERC’s open and balanced, consensus-driven standards development process so that their issues and concerns may be given full consideration in standards drafting.”

While this argument unfolds over which historical weather data to use in setting winterization standards, the industry is just beginning to consider how to prepare for even more severe extreme weather threats.

NERC, in its report on grid reliability last summer, concluded that the “impact of wide-area and long-duration extreme weather events … have underscored the need to consider extreme scenarios in resource adequacy and energy sufficiency planning.”

“We clearly are seeing the effects of the warming of the planet,” EPRI chief Arshad Mansoor told E&E News last year. “Our planning process does not take that into account.”

But planning the grid’s future defense is hindered by fundamental questions about who is in charge of the challenge, grid officials say.

At a FERC-sponsored conference in September on weather threats to New England’s power operations, Gordon van Welie, CEO of ISO New England, said, “There are limits to what the FERC and state regulators can do under their respective jurisdictions. I have really been struggling with … who is responsible for mitigating the impact of these risks. Is [it] the federal or the state regulator?”

NERC doesn’t have the jurisdiction to dig that deeply into how prepared generators are for extreme weather, and it has no authority over the vulnerability of power plant gas supplies to extreme weather, grid officials agree. There is no single organization at any governmental level with visibility over emerging extreme weather threats to critical energy infrastructure across all U.S. grid networks.

The issue of who is in charge has arisen in another FERC and NERC initiative, begun in June, aimed at strengthening critical parts of the transmission system against extreme weather.

The proposed rule — still pending at the commission — would require transmission providers to prepare corrective action plans for transmission assets whenever extreme weather plans are not being met.

The grid sector’s most powerful trade organizations, including the Edison Electric Institute, the American Public Power Association and the National Rural Electric Cooperative Association, said in a comment to the commission that they supported FERC’s efforts to deal with extreme weather vulnerabilities, hot and cold.

But they also warned the commission not to go too far.

The organizations cited a section of the Federal Power Act — FERC’s basic charter — that the industry representatives say limits the commission’s authority to “order the construction of additional generation or transmission capacity or to set or enforce compliance with standards for adequacy or safety of electric facilities or services.”

The organizations urged FERC to adopt a flexible approach to extreme weather, relying on the industry’s operational expertise.

A debate is only beginning about what FERC can and cannot do to require stronger defenses against future weather disasters, said Nick Guidi of the Southern Environmental Law Center, an environmental advocacy organization.

The trade organizations’ warnings about limitations on FERC’s authority are “certainly not shared by all attorneys practicing before FERC,” Guidi said.