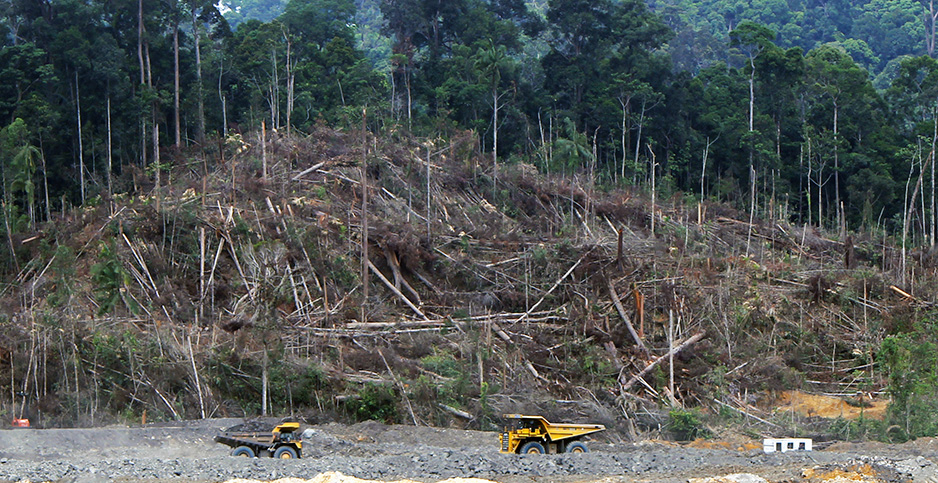 Land being cleared for a coal mine in Central Kalimantan, Indonesia. Southeast Asia is the only region of the world that's increasing its use of coal. Andrew Taylor/IndoMet in the Heart of Borneo/Flickr

SINGAPORE — Southeast Asia has one of the fastest-growing economies in the world, but intertwined with that rise is a rare distinction: a shift toward the use of more coal.

The Association of Southeast Asian Nations is "the only region in the world where coal is expected to increase its share" of the energy mix, said Keisuke Sadamori, director of energy markets at the Paris-based International Energy Agency.

It’s a pattern that runs counter to worldwide efforts to fight climate change. And it’s one that has caught the attention of environmentalists and several global organizations, from the United Nations to the International Renewable Energy Agency (IRENA).

All of them have urged Thailand, Indonesia, Cambodia, Vietnam and the six other nations that make up the 10-member ASEAN to pursue a different path, one led mainly by renewable power. U.N. chief António Guterres repeated that plea at the ASEAN leaders forum in Thailand.

"I am particularly worried about the future impact of the high number of new coal power plants still projected in some parts of the world, including several countries in East, South and Southeast Asia," Guterres told reporters.

But standing in the way of more aggressive ASEAN action on climate change are several factors, some geographic, some economic. Then, too, is the allure of cities such as Singapore, which stands as a glittering crown jewel in the region, and whose wealth was built on fossil fuel use, including coal.

The city-state is far and away the most advanced nation in Southeast Asia, with an estimated gross domestic product per capita of more than $64,000, according to the World Bank.

Now its neighbors are determined to catch up, following a development path along the same lines as China, and that track is threatening worldwide efforts to rein in global warming.

And it could get worse.

ASEAN’s own secretariat believes the association will expand to become the world’s fourth-largest economy by 2030, and the Southeast Asian alliance is already a greenhouse gas heavyweight. Combined, the 10 nations of ASEAN (Brunei, Cambodia, Indonesia, Laos, Malaysia, Myanmar, Philippines, Singapore, Thailand and Vietnam) release about 1.5 billion metric tons of CO2 to the atmosphere every year, according to data compiled by the European Commission.

"Action to move from a brown to a green economy would actually be a big boost for growth in ASEAN," IMF Director Kristalina Georgieva told the region’s leaders in the fund’s latest sales pitch. "Those who move first would have a competitive advantage. This is not to be ignored."

Acting more aggressively on climate change is in the region’s own self interest, too.

Of the six countries deemed most vulnerable in that new analysis, three are in Southeast Asia: Vietnam, Thailand and Indonesia. Singapore itself is low-lying and at risk of rising seas. And while Singapore doesn’t see itself as vulnerable to stronger tropical cyclones, the Philippines and Myanmar have been shown to be acutely at risk of increasingly powerful typhoons.

Singapore itself isn’t immune from altering weather patterns. Authorities there expect more demand for air conditioning. Fires in Indonesia can blanket Singapore’s skies with smoke, while droughts in Malaysia may affect the city-state’s water supplies.

But as they manage some of the fastest economic growth rates in the world, Southeast Asia’s governments are prioritizing stability and reliability in their grids, remaining wary of putting too much stock into renewable energy sources like wind and solar. A recent blackout in Taiwan, where the government was advancing a renewables-first strategy, only left ASEAN governments more skeptical of focusing on wind and solar alone.

The IMF expects the global economic slowdown and the China-U.S. trade war to blunt some of Southeast Asia’s momentum, but still predicts ASEAN to grow by 4.6% this year, and 4.8% next year. And expansion rates vary widely among the 10 countries — mature Singapore will barely register any growth, while Cambodia is seen expanding by nearly 7% per year.

"Cambodia has a very high import dependency as the country relies heavily on the import of coal, oil and electricity," Ty Norin, secretary of Cambodia’s Ministry of Mines and Energy, told his regional peers at a recent public forum here. "The increase in energy demand in Cambodia will also see the increase in carbon dioxide emissions from the combustion of fossil fuels."

Long supplied by fossil fuel abundance in Malaysia, Brunei and Indonesia, Southeast Asia’s energy demand is now outpacing production, and IEA thinks the region will become a net energy importer by next year, if it hasn’t already.

"Since 2000 overall energy demand has grown by more than 80% and the lion’s share of this growth has been met by a doubling in fossil fuel use," IEA analysts said in their latest regional energy outlook report, made public last week. "Oil is the largest element in the regional energy mix and coal, largely for power generation, has been the fastest growing."

There’s been recognition in some corners that the continued use of fossil fuels isn’t sustainable in the long term — though that view is hardly universal.

"Our dependence on fossil fuels to meet the extraordinary demand growth cannot persist for the next phase of our development," said Armida Salsiah Alisjahbana, head of the U.N. Economic and Social Commission for Asia and the Pacific. "We must look to new technologies and solutions across the energy value chain."

Some renewable energy projects are under development in the ASEAN states. The region’s leaders touted their support for wind and solar at the end of October during talks at Singapore’s International Energy Week themed events. But even the richest of ASEAN members insists that fossil fuels will be central to its energy mix for some time to come.

Singapore is moving on climate change on multiple fronts, planning for sea-level rise while also encouraging a rapid build-out of solar power to diversify its grid. The government recently gave the green light for construction of one of the world’s largest floating solar power plants. And during the week of discussions they hosted in October, Singapore officials touted the network of reservoirs this city has built as flood control and to ensure its water supplies.

But even Singapore is assuming that fossil fuels will continue to supply the lion’s share of its energy needs.

"We will continue to rely on natural gas for the next 50 years for a substantial part of our energy," said Chan Chun Sing, Singapore’s minister for trade and industry.

It’s an improvement from the past. Up until the 1990s, Singapore drew its electricity primarily from coal and oil, or imported the rest from coal-heavy Malaysia. The government pushed the island to embrace natural gas instead, and today Singapore generates 95% of its electricity from gas-fired plants fueled by pipeline imports and imported liquefied natural gas.

Minister Chan boasted of Singapore’s rush to develop solar power. With limited land and no real potential for offshore wind, Singapore aims to install solar on nearly every building, and the government even dreams of using the vertical spaces of its skyscrapers, including the windows. But even with full government backing, Chan said he expects solar to provide no more than 10% of Singapore’s power needs by 2030 at the earliest.

"Beyond natural gas, we have very little renewables," he acknowledged. "Solar power is our only renewable energy … unfortunately for us, 80% of the time, our skies are overcast."

All ASEAN nations have their own particular climatic and geographic challenges to overcome.

Straddling the equator, the seas around Malaysia, Singapore and Indonesia are generally calm. This makes offshore wind investment much less attractive there than in the windy North Sea of Europe, home to most of the world’s offshore wind energy systems.

Indonesia and the Philippines are archipelago nations composed of thousands of islands. Distributed solar is being built, as it can help meet their islands’ power needs, but not at night, and the physical space for massive solar arrays is limited. Governments are looking to LNG to fill the gap.

As is Brunei, a wealthy yet tiny sultanate not much larger than Singapore. Though solar holds promise there, "for the foreseeable future, we will still have LNG as a key source of electrification and as a fall-back solution for any disruptions," declared Yang Berhormat Dato Hussein, the country’s minister of energy.

The sole exception seems to be landlocked Laos, which draws the vast majority of its electricity from hydropower. Laos’ deputy energy minister told his peers assembled in Singapore that his government sees no reason to expand fossil fuel imports to meet its development goals.

But the main hurdles to moving beyond coal and natural gas in Southeast Asia are heavy industry’s demands for consistent, reliable power supply, and the rapid pace of economic growth in the region. Renewable energy is expanding in Southeast Asia at a fast clip, as well, but power demand is simply growing faster, Sadamori said, thus the continued reliance and expanding use of fossil fuels.

"In particular in this region, the economic activity is still a lot more dynamic than other regions, so economic growth is fast, and also the population is also growing in this region, so that inevitably leads to the increase in energy demand," he explained. "In that respect, reducing the emissions and the environmental impact will be a lot more difficult."

IEA does see a path forward for ASEAN to peak and then lower its greenhouse gas emissions. The agency’s plan would first see major improvements in energy efficiency. The United Nations estimates that the economies of ASEAN are among the least energy-efficient in the world — in Singapore, it’s common to see shops blasting air conditioning while doors and windows sit wide open.

"It may appear gloomy, but at the same time, we show that it doesn’t have to be this way," IEA’s Sadamori said. "The governments can accelerate the transition to clean energy systems along a sustainable development path. Of course, that requires a lot heavier policy intervention."