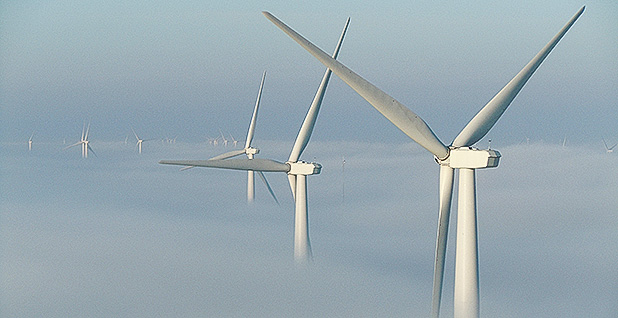 Turbines at Invenergy LLC's Bishop Hill I wind farm in northern Illinois. After weeks of uncertainty in Congress around the tax bill, the wind industry looks to continue its momentum in 2018. Invenergy

The final weeks of the year should have been a victory lap for the wind industry, as dozens of new projects representing gigawatts of new capacity were plugged into a U.S. power grid even as electricity demand continued to erode.

Instead, the industry, which had already negotiated a phaseout of incentives, found itself scrambling to protect renewable energy provisions in a sprawling tax code rewrite quickly winding its way through Congress (E&E Daily, Dec. 18).

Becky Diffen, an attorney for McGuireWoods in Austin, said the pace of activity noticeably slowed as developers and counterparties had to take stock of potential tax law changes and who would bear the risk moving forward.

"Nobody wanted to stop doing deals, but it slowed down the deals tremendously," she said.

Only late Friday when final compromise language was released was the industry able to assess any damage. That process continued yesterday, with the general view that the bill represents more of a flesh wound than a knockout blow.

The American Wind Energy Association noted in a brief statement that the bill preserves the federal production tax credit (PTC) phase out and changes to the base erosion anti-abuse tax (BEAT) would enable continued investment in wind energy.

It was feared that the obscure BEAT provision, aimed at stopping multinational companies from shifting profits overseas, could severely limit the market for renewable energy tax credits and severely limit financing of wind and solar projects.

Industry analysts, too, were still studying the effect of key provisions of the tax bill, including the BEAT provisions and the reduction in the corporate tax rate to 21 percent from 35 percent.

"It’s certainly not apocalyptic for wind, but it could have an impact," said Max Cohen, a renewable power research analyst at IHS Markit.

Cohen said the tax equity market doesn’t currently represent a bottleneck for financing deals, but the fact that there are relatively few large banks, insurers and multinational companies that purchase the tax credits means it could change suddenly.

IHS, in its most recent semiannual report, forecast about 7 to 8 gigawatts of wind capacity coming online each year from 2017 to 2019. The firm expects new wind additions to peak at about 10 GW in 2020, reflecting the push by developers at the end of last year to start work on projects to qualify for 100 percent of the tax credit.

To what extent any of that new capacity could be in jeopardy is unclear, Cohen said.

What is clear is that the wind development queue is still full of projects that were "safe harbored" last year.

The law requires wind farm developers to start construction on projects by the end of 2016 to qualify for the full PTC. They have four years to complete those projects. Projects that begin construction this year qualify for 80 percent of the PTC, with further step-downs to 60 percent and 40 percent in 2018 and 2019, respectively.

Under IRS rules, starting construction can include beginning physical work at a site, such as excavating for turbine foundations or building access roads, or expending 5 percent of the total anticipated project cost. Many developers did that by ordering equipment such as turbines and transformers.

With the clock ticking, developers continue to spend 2018 working on so-called off-take arrangements that will enable them to move forward with construction and complete wind farms by the end of 2020.

In many instances, those deals can take many forms, such as a sale to a utility or power purchase agreement (PPA) with a utility or corporate buyer or another, more complex off-take agreement.

"All of those deals are what’s keeping everybody very, very busy right now, and I expect those deals to continue into next year," Diffen said.

John Marciano, a partner in Akin Gump’s global project finance practice in Washington, D.C., said the type of wind deal varies by market. But a couple of significant trends are emerging.

"I think in the next year we’re going to see a huge push toward corporate PPAs and hedges," he said in an interview Friday, before the tax bill language was released. "And I think that’s largely going to be driven by the data center users, the big tech companies."

Another emerging trend in the wind business is the move by existing wind farm owners to repower older turbines to take advantage of the PTC.

"There are a lot of turbines that are out there where we can take the existing tower, an existing pad, swap out the blades or swap out the nacelles, or both, and sometimes it’s not even the same vendor," Marciano said.

And while much of the immediate focus will remain on projects coming online before 2020, wind developers are also qualifying new projects, even as the PTC steps down.

"All the major players are also looking ahead to the next round of projects," Diffen said.

Among those next projects is the Dakota Range I and II project, a 300-megawatt wind farm announced by Xcel Energy Inc. in September.

The project, being developed for Xcel by Apex Clean Energy Inc., is part of a much larger wind energy expansion for the Minneapolis-based utility, but it was notable because it represented the first publicly announced wind project to advance under the PTC phase down.

Cohen, the analyst, said wind costs continued to decline because of market forces and improvements in technology.

At an 80 percent PTC level, wind energy "economics still make sense in many regions," he said. But IHS sees the new capacity additions tapering off from 2020 until the end of the PTC in 2024.

To Diffen, who previously worked as a wind developer, the PTC phaseout is working exactly how it was intended, with incentives helping jump-start the market, fueling innovation and driving out costs.

"This is the reason this whole tax reform stuff shook up the wind industry so much," she said. "They went and they negotiated this phase out and it’s really, to me, a perfect success story on how subsidies are supposed to work."