Both GOP and Dems see vindication in Calif. grid misery 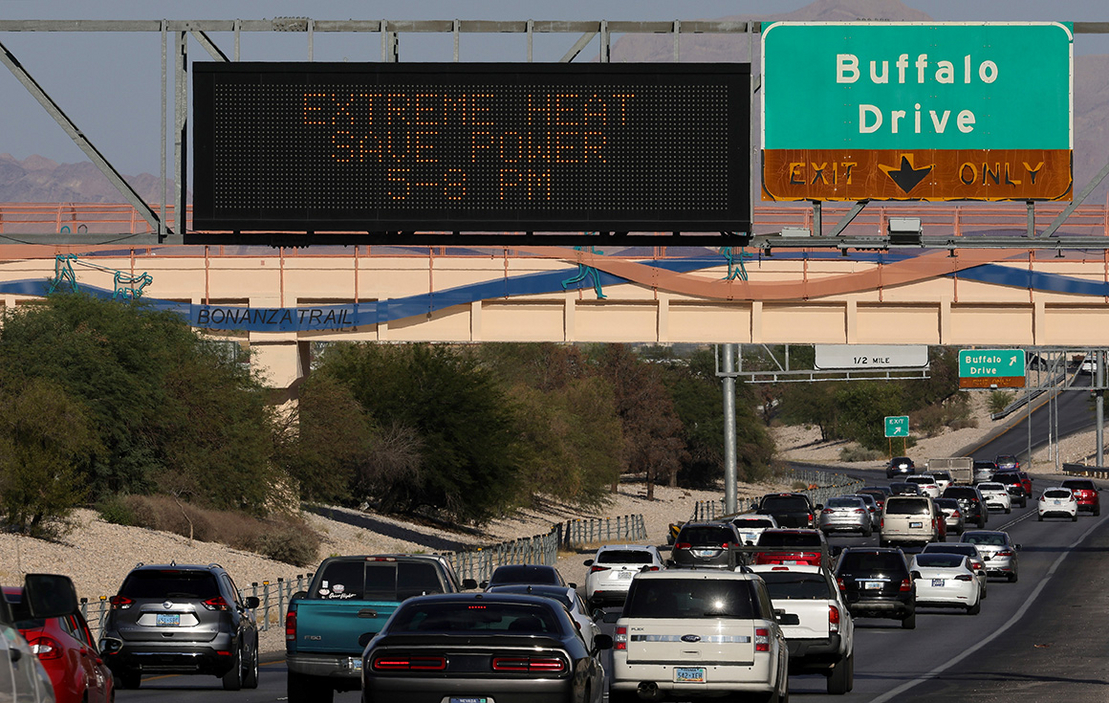 A road sign in Nevada urged people to conserve energy this week following high temperatures and high demand there and in California. Ethan Miller/Getty Images

Congressional Republicans see this week’s grid troubles in California as vindication for their energy policies.

And so do Democrats.

California is suffering through a record-shattering heat wave this week, with triple-digit temperatures resulting in a shaky grid and warnings from state officials to conserve. Nevada leaders also called for conservation, worried about overtaxing the West’s electricity network.

Republicans saw the chance to revisit their summerlong message blaming such woes on President Joe Biden and Democrats’ green energy policies. The GOP sees the line of attack as potent ahead of the midterms.

“California’s love affair with fickle, unreliable green energy could force its residents to put up with rolling blackouts just to conform to wealthy liberals’ preferences,” Senate Minority Leader Mitch McConnell (R-Ky.) said in a Thursday floor speech. “The government had to send out an emergency message begging citizens to ration power.”

Democrats accurately pointed out that the state didn’t experience any blackouts and said it was a victory for renewable energy.

“I’m sorry to disappoint Mitch McConnell, but we kept the lights on in California once again,” said Jared Huffman (D-Calif.).

For Senate Republicans, the grid troubles have presented the perfect opportunity to focus on their “Biden blackout” messaging (E&E Daily, Aug. 9).

All summer, they have used as a jumping off point a report from the North American Electric Reliability Corp. warning of potential energy irregularities due to a lack of transmission capacity and heat waves brought on by climate change.

Those warnings haven’t really panned out, though California came close to implementing rolling blackouts Tuesday (Energywire, Sept. 8). It was enough to get Republicans going.

They pointed to a pair of events in California. Last month, a state board adopted a rule barring the sale of gas-powered vehicles starting in 2035 (Climatewire, Aug. 26). Last week, the state advised electric vehicle owners not to charge their vehicles during peak demand.

Conservatives have long argued — and experts largely agree — that grids aren’t currently prepared to handle a future influx of electric vehicles, or even the numbers on the road today.

“I think it’s ironic that the zealots in California announced they’re banning gasoline automobiles; and at the same time, the Democrat governors are instructing people, ‘Don’t charge your electric vehicles because we can’t keep the lights on,'” Sen. Ted Cruz (R-Texas) told E&E News.

Republicans seem prepared to make the California situation a campaign issue. Rep. Tom Emmer (R-Minn.), the chair of the National Republican Congressional Committee, tweeted Thursday, “These policies are completely out of touch with reality.”

Democrats, however, are seeing California’s ability to avoid rolling blackouts as a victory for clean energy policy in the state, especially in comparison to other states that have had blackout problems.

In responding to McConnell, Huffman said, “If he wants to see an example of grid failure, he should check out Texas.”

Huffman added that California, which has often suffered with brownouts, has worked for some time to shore up reliability through more battery storage and demand response systems.

He also argued that, while the grid will likely need to adapt to increased demand brought on by EVs, batteries in vehicles can function as a power source for homes in the event of a blackout.

Other Democrats saw the use of text alerts as a sign of good cooperation between Democratic leaders and residents, rather than the act of desperation Republicans painted it as.

“Its all hands on deck right now,” said Sen. Alex Padilla (D-Calif.). “It seems that many, many people are doing their part.”

‘Preview of things to come’

Both sides of the argument have some merit, according to Andrew Campbell, the executive director of the Energy Institute at the University of California, Berkeley. He said renewable energy has performed exceptionally well in extreme weather conditions in California and that renewable energy battery storage, which has been built out significantly in California, contributed heavily to meeting peak demand in the evening when solar energy shuts down.

He added that it’s a good idea for California to reduce carbon emissions to try to mitigate the extreme heat waves and weather California suffered this week.

Campbell also said that to avoid future rolling blackouts, it would be a good idea for California to invest in natural gas capacity, an idea that is anathema to climate hawks such as Huffman.

“I think where California has fallen short is not maintaining a commitment to invest in the types of power plants that will operate in the evenings, particularly natural gas power plants,” said Campbell.

And while Republicans argue for fossil fuels and Democrats argue for more renewables, it’s clear that both sides think California will need to continue to build out more abundant energy supply to handle future stress.

“This is probably a preview of things to come with climate change,” said Huffman. “Clearly, we need to build a grid that is capable of handling more frequent episodes like this.”