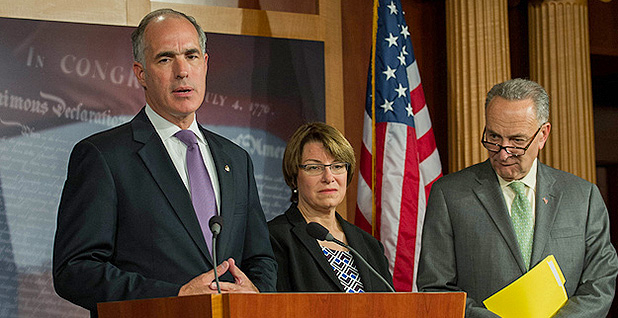 Senate Minority Leader Chuck Schumer (D-N.Y.) wants Democrats to hold the line against Supreme Court nominee Neil Gorsuch on the chamber’s floor — blocking the judge’s confirmation via a filibuster. But first he’ll need to convince his colleagues up for re-election in states that went for President Trump only six months ago that it won’t cost them their seats in 2018.

The New York senator announced Thursday that he will oppose Gorsuch’s nomination to replace the late Justice Antonin Scalia and will force a cloture vote, requiring 60 votes for his confirmation.

That would mean Republicans, who hold the majority with 52 seats, would need to sway at least eight of the chamber’s 46 Democrats or two independents who caucus with the minority party.

But that may be easier than expected — even as Democrats remain resentful over the GOP’s barricade of President Obama’s Supreme Court nominee, Merrick Garland, last year.

Among the 34 Senate seats up for election in 2018, 25 are held by Democrats, including 10 who represent states that picked Trump in the 2016 presidential race.

"They’re kind of caught between a rock and a hard place. On the one hand, in the primaries, the Democratic base wants them to oppose President Trump at all costs, on everything. … But then their general-election concern is getting support from those Trump voters," said West Virginia University political science professor Patrick Hickey. "That’s the calculation that they’re trying to gauge."

Among the few lawmakers to publicly voice their decisions to date, Casey announced in an op-ed in The Philadelphia Inquirer on Thursday that he would oppose Gorsuch.

"We need a Supreme Court justice who will restore fairness, balance, and independence to the highest level of the judiciary. Based on his record, I do not believe Gorsuch would be that kind of justice. I will vote against his confirmation," Casey wrote. Brown announced his own opposition to Gorsuch earlier this year.

But should other potentially vulnerable Democrats fall in line with Casey, Majority Leader Mitch McConnell (R-Ky.) could opt for the "nuclear option," changing the Senate’s rules to require only a simple majority for high court nominees.

Schumer acknowledged the possibility in his call for a cloture vote last week and reiterated his remarks on ABC’s "This Week" yesterday morning.

McConnell has not explicitly said he will pursue that option but has questioned whether any nominee put forth by Trump would be able to overcome the 60-vote threshold in the current political climate.

West Virginia’s Manchin indicated that he will not join a filibuster with his fellow Democrats, citing his concern over the "nuclear option."

"How do you preserve the Senate? How do you preserve the input that the minority should have? Because what goes around comes around," Manchin told Yahoo News recently. Democrats made a similar change when they were in the majority in 2013, amending Senate rules to require a 51-vote majority for presidential appointments but leaving an exemption for the high court.

A move by Manchin to stall or block Gorsuch could have a greater impact on his re-election prospects than if his potentially endangered colleagues in Wisconsin or Ohio went along with the tactic.

Like voters in Indiana and Missouri — where Donnelly and McCaskill are expected to face tough re-election fights after winning bids against self-sabotaging GOP challengers in 2012 — West Virginia voters gave Trump a double-digit win over Democratic nominee Hillary Clinton.

"Manchin’s kind of calculation is clear, especially on something like filibustering a qualified Supreme Court nominee. I don’t think he can afford to do that," Hickey said, pointing to the state’s changing political affiliations that have cost Democrats their onetime grip on West Virginia.

Moreover, Hickey said that the act of bucking party leadership continues to shore up Manchin’s "brand" ahead of his re-election bid.

McCaskill has yet to announce whether she will back Gorsuch on the floor but has repeatedly said he should be held to a 60-vote standard that other Supreme Court nominees have faced. Similarly, Tester told the website RealClearPolitics that he had yet to made a decision about Gorsuch but planned to spend the weekend mulling his options.

Trump identified those Democrats from states that voted him into office as potential Democratic allies earlier this year, inviting Tester, Manchin, Heitkamp and Donnelly to the White House to discuss the Gorsuch nomination and other issues.

Still, some Democrats could attempt to split their vote — initially supporting a filibuster before ultimately voting in favor of Gorsuch’s nomination.

But North Dakota Republican Party Executive Director Dane Ferguson asserted that even supporting one round of a filibuster would be damaging to Heitkamp’s re-election hopes.

"Trump has overwhelming support in the state of North Dakota, and Heidi needs to support Gorsuch," Ferguson said of Heitkamp, who has not revealed where she will fall on the potential filibuster.

"If we don’t have a Democrat that’s willing to work with the party that’s in charge or to at least have an open mind, that’s going to come back to haunt her," Ferguson added. "If she doesn’t support the filibuster, that’s one thing, but if she’s not working to discourage her colleagues in the Senate to also go along with it, that’s also a lack of leadership that she’s shown."

While it’s possible that such a move could show up in campaign season advertising, aiming to tie Democrats in red states to their party or highlight partisan gridlock on Capitol Hill, at least one Republican strategist said it’s unlikely to become a major issue in many 2018 races.

"Democratic senators in red states generally won previously because they sold themselves to voters as independent thinkers who were willing to cross party lines. So there’s no question that voting against an exceptionally well-qualified Supreme Court nominee simply because Chuck Schumer tells them to will risk tarnishing that image and make it harder for voters to believe them moving forward," said Brian Walsh, a partner at Washington, D.C., public relations firm Rokk Solutions and a former top strategist at the National Republican Senatorial Committee.

He added: "It wouldn’t be a central issue in their re-election in and of itself, but it would be part of a larger argument that they are the ones responsible for the partisanship and gridlock in Washington."

Moreover, Democrats should be expected to seize on the GOP’s failure to enact a health care reform bill in the House last week — dropping the legislation to revoke portions of Obama’s health care plan rather than holding a vote that was doomed to fail — and link Republican challengers to Trump’s apparent impotence as a unifier of his own party, much less Congress.

"The 2018 Senate campaigns are now going to be defined by the Republicans’ failed health care plan — and every Republican Senate candidate will have to answer for their agenda of making older Americans pay five times more for care, stripping coverage away from millions and breaking their promise to provide ‘insurance for everybody,’" said Democratic Senatorial Campaign Committee spokesman David Bergstein. "The GOP health care platform to increase costs and cut coverage for the middle class is as toxic in Nevada as it is in West Virginia, and it will be the central, dominant issue in these races."

Schumer said yesterday that Trump has hurt his standing after campaigning as a "defender of the middle class" before shifting to "the hard right" once he occupied the White House.