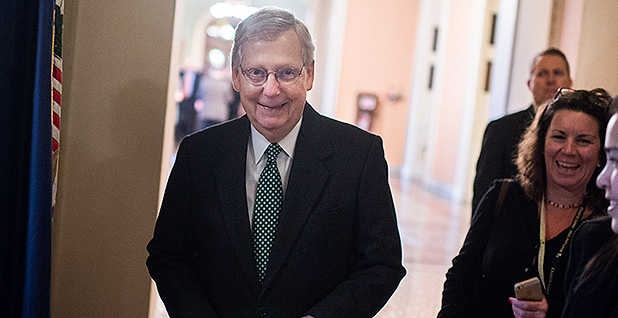 Republicans signaled yesterday they’re not in a hurry to bring the "Green New Deal" to the Senate floor, giving Democrats time to develop a counter-message on climate change.

But there’s no doubt the resolution introduced by Sen. Ed Markey (D-Mass.) and Rep. Alexandria Ocasio-Cortez (D-N.Y.) is still making waves in the Democratic caucus.

Senate Majority Leader Mitch McConnell (R-Ky.) told reporters yesterday the Senate would debate the measure "in all likelihood before the August break," apparently pushing the timeline back for a vote that many speculated would come in the next few weeks.

For now, Senate Democrats are still holding their fire on the "Green New Deal," though several have suggested they would vote "present" when McConnell brings it to the floor.

They discussed the resolution during yesterday’s caucus lunch but no decisions were made on a strategy, Minority Whip Dick Durbin (D-Ill.) told E&E News.

"We’re waiting to see what McConnell wants to do. He’s the one who brought it up," Durbin said.

But they are using the opportunity to push for a more public debate about climate change.

Sens. Sheldon Whitehouse (D-R.I.), Brian Schatz (D-Hawaii) and Martin Heinrich (D-N.M.) yesterday penned a letter to McConnell asking for a full day of floor debate on climate change "before any vote is taken on the Green New Deal resolution."

And Environment and Public Works ranking member Tom Carper (D-Del.) said on the floor last night he would introduce his own resolution acknowledging climate science and calling for action, an effort to unify the caucus on the climate change basics.

"We just think it’s important to acknowledge it’s real, the source of it is humans, at least in the last 100 years. And the other thing is to say maybe the Congress has a role in this," Carper told reporters yesterday, adding that "we’ve been talking about it for a while."

The "Green New Deal," though, continues to draw a wide range of responses from Democrats.

Senate Energy and Natural Resources ranking member Joe Manchin (D-W.Va.), a moderate who has angered progressive environmentalists with his stances on fossil fuels, said it was up to Democrats to stake out their own positions.

"Everybody’s going to have to find out where they’re comfortable on it," Manchin told reporters yesterday. "It’s basically just messaging, which is strictly political posturing."

Manchin reiterated his own view that technology should be developed to allow for continued and cleaner use of fossil fuels.

"I’ve got to deal in the real world, I’ve got to deal realistically," he said. "I want a reduced carbon footprint. We can do that, but you have to do research and development and acknowledge that you’re going to have to use fossil [energy] in the near future for some time here.

"And can use it cleaner. That’s where we should be going to reduce our carbon footprint and also hopefully developing more clean energy."

Many Democrats also talked around the "Green New Deal" itself, instead focusing their comments on climate change as a broader issue.

The resolution now has 11 Senate co-sponsors, including several presidential candidates, and 89 in the House — a huge chunk of the House Democratic caucus. It would call for a 10-year economic mobilization to slash greenhouse gas emissions, as well as health care for all and a federal jobs program.

But over the past few days, moderates have signaled they want to keep the "Green New Deal" centered on climate change and not get themselves into trouble with centrist constituencies by supporting the more progressive elements of the plan.

"I want to keep it focused on climate and not other issues because I want action on climate change," said Sen. Debbie Stabenow (D-Mich.), a member of the Environment and Public Works Committee.

Sen. Dianne Feinstein (D-Calif.) has also caused a stir with progressive activists by floating, and then reneging on, an alternative to the "Green New Deal."

Her office released a draft Friday after a video of her confrontation with young climate activists went viral on Twitter (Climatewire, Feb. 25).

It calls for a carbon price to get to net-zero emissions by 2050 and restoring the Clean Power Plan, among other things.

After outcry from several groups that said it was simply a watered-down version of the original "Green New Deal," Feinstein said she would make changes (E&E News PM, Feb. 26).

"I’m trying to draft another one, which might be more acceptable, but it’s not done yet," Feinstein told E&E News last night.

Asked about a possible vote on Feinstein’s climate resolution, Durbin said he had yet to see it.

The list of policy goals from Markey and Ocasio-Cortez is still causing some sticky debates on the House side, as well.

House Budget Chairman John Yarmuth (D-Ky.) said yesterday the upcoming fiscal 2020 budget resolution won’t include a call for a "Green New Deal," an issue that could doom the spending blueprint on the floor.

"The complicating factor is there are members who would have a hard time voting for a budget that didn’t in some way anticipate a ‘Green New Deal,’" he said. "That’s going to be the challenge we face."

Yarmuth said there are few specific policy programs in the "Green New Deal," so it’s hard to put them in the budget. The spending plan would contain some more narrowly focused climate proposals aimed at infrastructure and the electric grid, he added.

Yarmuth noted he was in the process of meeting with committee leaders, including Energy and Commerce Chairman Frank Pallone (D-N.J.) yesterday, as well as caucuses about their priorities. He’ll then turn their ideas into a spending blueprint.

"The odds are we will mark up [the budget], then the question is can we get 218 on the floor?" he said, adding the diversity of views in the House Democratic caucus.

The nonbinding budget is meant to serve as a blueprint for appropriators as they craft their annual spending bills, but also serves as a defining document for the political parties.

In recent years, both Democrats and Republicans have struggled to enact a budget, forcing lawmakers to set spending levels without the specific policy guidance.