BP already hit its methane targets. Or did it? 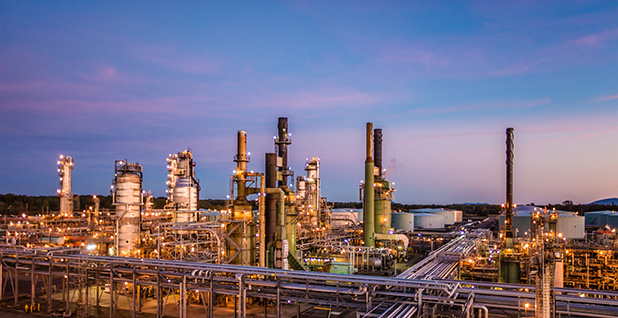 A year ago, BP PLC announced it was taking steps to reduce emissions of climate-warming methane from its operations and set a clear target for those leaks. Yesterday, the company said it has already met its methane emissions goal.

BP’s statement last year was that the company would hold leaks of methane, the primary component of natural gas, to no more than 0.3 percent of total production. The company adopted a softer "target" to keep emissions even lower, to 0.2 percent.

Yesterday, the company said it has already met its tougher, aspirational goal.

"By the end of 2018, BP had generated 2.5 million [metric tons] of sustainable GHG emissions reductions throughout its businesses since 2016. BP’s methane intensity for 2018 was 0.2 percent — in line with the target," the company said.

The statement that the company fulfilled its emissions goal within months of announcing it raises questions about the numerical methane targets that have been gaining traction across the natural gas industry.

BP’s methane leak rate is already at the aggressive end of the window it set for itself, so the target amounts to a goal of not increasing the company’s leak rate over where it stood in 2018.

"The main, entrenched methodology for calculating emissions is desktop calculations based on years-old emissions factors that often understate emissions in the real world," said Ben Ratner, a senior director with the Environmental Defense Fund who works on methane issues. "The truth is, 0.2 [percent] is a stringent target" if companies are meeting it in the real world, he added.

Ratner said a key component of voluntary emissions commitments is transparency about the methodologies and data behind them.

"The next step for companies with stringent methane targets is to demonstrate they’re meeting them," Ratner said. "To my knowledge, none of these companies have done that yet."

BP’s actions on methane leakage last year came as big industry players were grappling with a rising tide of concern that leaks of the gas throughout the production, transmission and distribution process might offset the carbon dioxide advantage that natural gas holds over other fossil fuels, especially coal, and threaten the narrative of natural gas as a climate winner.

Coal is a heavy emitter of carbon dioxide when it is burned for power, and the move by utilities toward cheaper natural gas has pushed carbon emissions from the U.S. power sector down since 2005. But when leaked into the air without combustion, methane has 80 times the climate-warming power of CO2, counteracting that advantage.

Oil and gas companies have been eager to show that natural gas offers major climate benefits over other fossil fuels and to shed the framing of it as just a "bridge" to cleaner alternatives. Part of that effort has been to show that the industry is tackling the leaks that hurt its emissions profile.

Royal Dutch Shell PLC and Exxon Mobil Corp. were among the other supermajors that announced methane leak targets last year, while the Oil and Gas Climate Initiative, an industry group that includes those companies as well as Chevron Corp., Total SA, China National Petroleum Corp., Equinor ASA and others, set a collective "ambition" of reaching that same 0.2 percent methane intensity on a combined average basis (Energywire, Sept. 18, 2018).

When BP announced its new climate goals in April of last year, the company said its methane target applied only to operations where gas is marketed, which it said accounts for more than 90 percent of methane leakage within its operations. The target excludes operations from which gas is not sold, such as those where gas is a co-product of oil drilling but is not economical to bring to market, and those where another company runs operations on BP’s behalf.

It was unclear whether it applies only to production activities or also extends downstream, and whether BP plans to disclose or externally validate its emissions figures.

Reached this week, a BP spokesman did not answer questions about details of the policy.

In an email, Brett Clanton, BP’s senior director for U.S. media affairs, stressed the distinction between the company’s broader greenhouse gas reduction goals, on which it is working toward a 2025 target, and its methane emissions goal. "The announcement yesterday was meant to show that in the one year since the target was announced, we were successful in keeping methane emissions at 0.2% in 2018 — just as we had committed ourselves to — and that we also had made substantial progress toward our overall GHG emissions reductions target," he said.

In its press release yesterday, BP credited a strong response by its staff for its fast progress on emissions.

"A year ago we challenged everyone at BP to reduce emissions in our operations and they have responded overwhelmingly," said BP’s upstream business chief, Bernard Looney.

The company said over the past year, BP’s total direct greenhouse gas emissions have fallen by 1.7 million metric tons of carbon dioxide equivalent, despite a 3 percent growth in upstream oil and gas production. From 2016 to 2018 it reduced greenhouse gas emissions throughout its businesses by 2.5 million metric tons on a sustainable basis, the company said.

The statements came in a press release about a new $100 million "upstream carbon fund" that BP is launching to pay for internal emissions reduction concepts.

Looney said the $100 million would be spent over the next three years to finance additional greenhouse gas reduction opportunities.

"The purpose of this new fund is to encourage employees to come up with even more ideas and to turn those ideas into reality," he said. "It will fund ideas both big and small because everything counts in our transition to a lower carbon future and everyone at BP has a role to play."

BP had total capital expenditures of $25 billion in 2018.

The oil and gas industry’s action around voluntary methane emissions targets has come as companies have fought federal regulations on the issue.

The Trump administration has worked to unwind rules advanced under former President Obama to address methane leakage from both new and existing oil and gas operations. Most recently, EPA has worked on rewriting a regulation that would require checks twice a year for leaks from certain equipment and set timelines for needed repairs, among other measures (Greenwire, Oct. 12, 2018).

The American Petroleum Institute says it supports "a cost-effective regulatory framework," and while Shell and BP executives have said within the last month that they support EPA methane regulation, advocates say evidence of industry support for federal methane rules is lacking (Climatewire, March 25).

In a report last year, EDF outlined key components of a strong voluntary methane commitment. The group said companies adopting them should include emissions from both oil and gas operations, include "non-operated assets" that they own but contract out for daily operations, set absolute targets where possible to avoid the possibility that "methane intensity" decreases even as overall methane emissions rise, and submit their data and analysis to the public or independent experts for credibility.

Ratner pointed to a major data project conducted by EDF along with Stanford University researchers and other partners, which used field monitoring to conclude that overall methane emissions intensity across the oil and gas supply chain is over 2 percent.

That work, which culminated in a study published in the journal Science, estimated that the U.S. oil and gas industry emits 13 million metric tons of methane each year. The figure is about 60 percent higher than a similar estimate by EPA that relies on paper-based methodologies, Ratner said (Climatewire, June 22, 2018).

EDF recently announced a new partnership with BP on a series of technology and management initiatives around methane emissions, through which the groups will work together on issues like securing government approval of new monitoring technologies and using artificial intelligence and machine learning in the field.

"EDF and BP don’t agree on everything, but we’re finding common ground on methane," said EDF President Fred Krupp at the time, noting that EDF will not be taking money from the oil company.

Ratner said BP’s claims to have hit its emissions targets would have more weight if the company disclosed the methods it used to produce them.

"I think BP is a good-faith collaborator in addressing emissions," Ratner said. "The key question is, don’t tell me, show me."

Correction: This story has been updated to reflect that BP’s methane emissions target is ongoing, and not linked to a particular timeline.