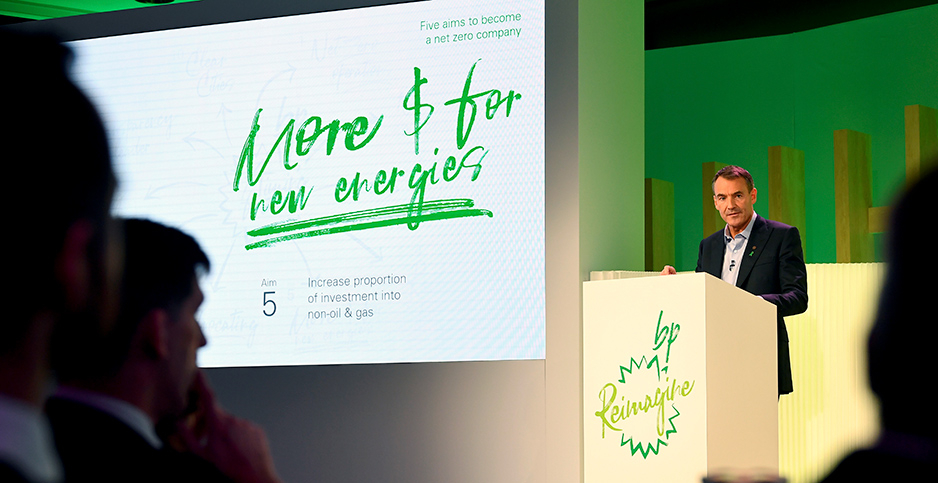 HOUSTON — The Energy Corridor, a business district on the west side of Houston, has long been the beating heart of the U.S. oil industry. It’s home to BP PLC, Royal Dutch Shell PLC and ConocoPhillips.

Now it’s also the epicenter of a sea change.

BP and Shell are charting a dramatically new course for the industry, pledging to eliminate their greenhouse gas emissions, slash spending on new oil and gas projects, and pump money into renewables and other low-carbon ventures.

The stance is increasingly common among European oil giants but stands in stark contrast to the "Drill, baby, drill" mantra that has long defined U.S. producers.

Industry observers in America’s self-proclaimed energy capital have greeted the shift with a mixture of enthusiasm, grudging acceptance and outright hostility.

Some questioned recent moves by BP and Shell that signaled a shift away from oil, saying they appeared designed to appease European regulators and inject life into the companies’ lagging stock prices.

Others noted that oil’s death has been foretold before, even as they acknowledged the challenges of adapting to societal pressures to green the industry. Many predicted that an energy transition could greatly benefit Houston, though they expressed doubts that the oil industry will dry up anytime soon.

Signs of the city’s evolving views were evident this year when Bobby Tudor addressed the Greater Houston Partnership, a prominent local business group of which he is the 2020 board chair.

Tudor is a high-profile figure in the oil world. He’s chairman of Tudor, Pickering, Holt & Co., an investment bank and a prominent oil field lender. In a much-publicized speech, Tudor argued that the traditional oil and gas business is unlikely to be the growth engine for Houston over the next 25 years, as it was in the last 25. He was quick to say oil and gas production won’t disappear anytime soon, but he suggested that Houston has an opportunity — and a responsibility — to lead the world in an energy transition.

"If we want to create jobs in Houston and grow our economy and grow our tax base and improve quality of life for our citizens, we’re going to have to find other engines of growth," Tudor told E&E News this week.

Ed Hirs, an energy fellow at the University of Houston and a co-founder of a renewable fuels company, said there will need to be reinvestment in oil — even as the energy transition moves ahead. The world is projected to consume around 93 million barrels a day this year, according to the U.S. Energy Information Administration. That is down from roughly 101 million barrels consumed last year, a drop attributed to the coronavirus, but it’s still more than the world used a decade ago.

"Folks have been really aggressive here at writing the obituary for the oil patch," Hirs said.

But "nothing could be further from reality," he said. "It’s a good storyline. They’ll be writing about the demise of the oil patch for the next 40 years."

Predictions that oil consumption will need to fall dramatically, but not disappear, are shared by climate scientists. In 2018, the United Nations’ Intergovernmental Panel on Climate Change outlined a series of pathways needed to limit global temperature rise to 1.5 degrees Celsius by 2100.

They estimated that oil use will need to fall by between 31% and 78% by 2050, compared with 2010 levels. The scientists envisioned an even larger range for natural gas, which they said could help arrest temperatures by rising 6% or falling 56%, depending on the deployment of carbon capture technologies. The share of renewable energy in the global electricity market, by contrast, will need to grow anywhere from 69% to 87% by midcentury.

Whether BP and Shell are moving fast enough to meet those targets remains an open question.

Reuters reported this week that Shell is exploring ways to cut oil production costs by up to 40% in part by limiting spending on new projects. BP has been even more outspoken under new CEO Bernard Looney.

The London-based major has pledged to cut oil production 40% by 2030 and high grade its remaining oil and gas assets, essentially investing only in the most lucrative fossil fuel projects. It has said it will dedicate a third of its capital spending, which is expected to reach $12 billion this year, to renewables and low-carbon ventures by 2025 (Climatewire, Aug. 5).

Those moves come as the company divests itself of its petrochemical business, long viewed as one of the oil industry’s best growth opportunities. Oil majors have long organized themselves along upstream (oil and gas production) and downstream (refining) formulas. But BP will embrace a new model in 2021 by dividing itself into four divisions: hydrocarbons, mobility, low-carbon ventures and energy trading.

That marks a fundamental shift for the company and differentiates BP from other oil majors that have announced net-zero carbon goals, said Alex Dewar, a Washington, D.C.-based analyst who tracks the industry at Boston Consulting Group.

He pointed to the recent $5 billion sale of BP’s petrochemical business to Ineos and the British oil major’s $1.1 billion deal to acquire a 50% stake in two offshore wind projects as evidence of the company’s seriousness about remaking itself.

"Whether it will succeed is an entirely separate question," Dewar said. "In some ways, it is dependent on their ability to bring investors along with them. They are going to need the capital and investors to fund the journey."

BP’s recent moves haven’t arrested the company’s declining stock value on the New York Stock Exchange. The company staged a brief rally after BP announced plans to cut oil and gas production and boost spending on renewables. That was on Aug. 4. Eight days later, the stock resumed its slide, and it has lost a quarter of its value since Aug. 12. BP was trading around $18 yesterday.

In Houston, BP’s overhaul has been greeted with angst among its rank and file. The company maintains a 4,000-person workforce in the area, according to a survey by the Houston Chronicle. Executives have said they intend to cut 10,000 positions worldwide as part of an effort to trim costs in the face of the economic downturn.

Looney, BP’s CEO, addressed that anxiety during a three-day capital markets presentation last week, noting that the company’s evolution comes amid a pandemic when many employees are wondering whether they will have a job.

"It is a difficult time inside the company and, at the same time, we’re doing a lot of things that are exciting," Looney said. "And we have to manage this message carefully, because on the one hand, you don’t want to appear to be tone-deaf, i.e., not really understanding.

"We do understand what’s happening," he continued. "And at the same time, we have to give the many, many people who are staying the sense of hope and ambitions for the future. So it is a difficult challenge."

Selling the rest of the oil industry on BP’s dramatic pivot figures to be an even bigger task. Exxon Mobil CEO Darren Woods in March dismissed the net-zero carbon pledges by his European counterparts as "a beauty competition." Instead, he predicted his firm is "well positioned for the inevitable upswing as growth in demand outstrips current supply" (Energywire, March 6).

The sentiment reflects widespread skepticism about BP’s reinvention. Some analysts noted that the sale of BP’s petrochemical business came as the company seeks to divest $15 billion in assets and address the $40 billion in debt on its balance sheet.

They argued that the company was merely selling off assets to improve its book — and repackaging it as a green transformation. Selling those assets to another company may clean up BP’s image, but it does not mean those operations will cease operating, they said.

There’s a wide range in how companies are addressing the energy transition, said Tudor. Midsize U.S. oil and gas producers are extremely unlikely to get into battery production, wind power generation or grid management software. But such companies can seek to run their businesses more cleanly and invest in technology that may help lead to a lower-carbon future.

BP’s statement is a marker from an important company, which gets people’s attention.

Still, he said, "just ’cause BP’s doing it doesn’t mean everybody else is going to follow."

Indeed, many analysts questioned BP’s recent prediction that oil demand will plateau in the coming decades even if the world does not address climate change. The oil giant said demand could plummet by up to 80% if governments move to slash emissions (Climatewire, Sept. 14).

"When you look at oil company forecasts, whether they are for supply, price or demand, you need to look through the lens of companies’ frame of reference. And right now, you have an environment that’s really penalizing energy companies and oil companies in particular," said John Saucer, an analyst at Mobius Risk Group in Houston.

"They’re trying to capture something that will differentiate BP in equity markets and with investors. That doesn’t mean they are right about demand," he added.

"The pressure on the portfolios of those companies to maintain their license to operate is a different set of pressures than the U.S. or other parts of the world," he said.

Hofmeister also said the oil and gas sector has been examining the potential for peak oil.

"To say that oil may well peak by 2030 is not really outside the realm of what most in the oil and gas industry believe," he said.

Yet the danger to the oil industry has become evident in recent days. Chinese President Xi Jinping said this week that his country would eliminate carbon emissions by 2060, a goal that, if achieved, would have drastic implications for oil demand (Climatewire, Sept. 23).

The world’s next generation of chemical engineers and geologists are acutely aware of those challenges, even if they remain fully committed to pursuing a career in the oil industry, said Ken Medlock, senior director at the Center for Energy Studies at Rice University in Houston.

Students from Asia, Latin America and Africa in particular see the oil and gas industry as a way to spur economic development in their home countries, he said.

Medlock nevertheless said he has noticed a shift in his students’ views in recent years.

"Across the board, they all recognize the importance of environmental impact and all have a really strong interest, or keen desire, in focusing on interesting problems to solve," Medlock said. "It’s not just ‘I want a degree in X and work as a chemical engineer in a refining facility.’ They are interested in the challenges for future of energy, how do we solve that."

Their success could shape Houston and the oil industry’s future.