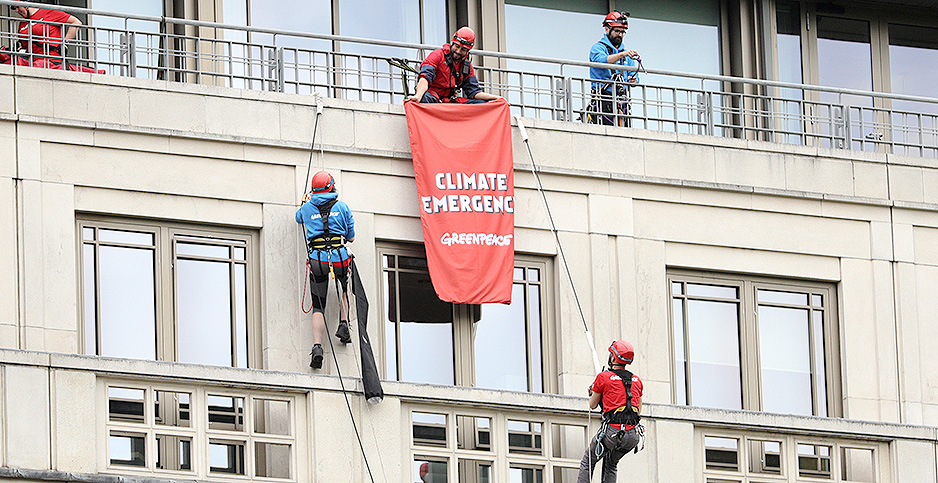 Royal Dutch Shell PLC and BP PLC faced intense pressure on climate change at their annual meetings yesterday as protesters sought to disrupt the gatherings and draw eyes to their cause.

Greenpeace protesters blocked the entrances to BP’s London headquarters with heavy boxes, placed during the night by crane lift, with protesters locked inside. The spectacle did little to disrupt the annual shareholder meeting, which the company held 500 miles away in Aberdeen, Scotland, in what the company described as a nod to its North Sea operations.

In Aberdeen, some protesters inside the meeting set off an emergency alarm as BP CEO Bob Dudley addressed attendees, while others yelled, "This is a crime scene," according to Reuters.

Similar demonstrations are likely to mark gatherings to be hosted by Exxon Mobil Corp. and Chevron Corp. next week, but activist investors have made less headway on policy at the U.S.-based companies.

Climate protests have become a fixture of energy company gatherings, as demonstrators outside seek attention for the less showy corporate engagement taking place within.

In a vote at the BP meeting, shareholders approved a resolution to align the company’s business strategy and project investments with the Paris climate agreement, but they voted down a proposal that the company restrict emissions from the sale of its products, which BP executives maintain are beyond their control.

The resolution on business strategy disclosure was put forward by the global advocacy group Climate Action 100+ and received a 99% approval from shareholders following an endorsement by BP’s board of directors. It requires the company to disclose the climate-related risks that it faces, especially related to the competitiveness of its assets if global policies are enacted that force a cutback in oil and gas development in favor of non-carbon energy sources.

The resolution on carbon from energy products was advanced by a group called Follow This and called on the company to curtail emissions not only from its operations, which makes up a significant minority of oil- and gas-related greenhouse gases, but from the burning of the oil, gas and other products that it sells, as well.

Both measures address company emissions as they relate to the Paris Agreement’s goal of limiting global average temperature increases to 2 degrees Celsius above preindustrial levels.

In a notice of its meeting, BP urged shareholders to vote against the product-related proposal, saying it would "restrict the flexibility BP needs to adjust to the pace and direction of the energy transition as it unfolds and could significantly inhibit our ability to deliver long-term shareholder value by limiting future portfolio choices."

In December, Shell broke new ground when it said it would set targets to limit those "scope 3" emissions from energy products that it sells beginning in 2020. The plan was announced alongside a linking of executive pay to Shell’s climate performance and a target to cut its climate footprint in half by 2050 (Greenwire, Dec. 3, 2018).

At its own annual meeting yesterday in the Netherlands, Shell received some praise from activists — along with jeers — for its climate response.

"Shell’s approach is beginning to demonstrate that it is possible to have a business strategy that is aligned with the need to transition to a low-carbon economy, while also ensuring that the company is financially successful," said Adam Matthews, the director of ethics and engagement for the Church of England Pensions Board, an investor group at the forefront of Climate Action 100+’s advocacy efforts. He spoke at the annual meeting.

Shell CEO Ben van Beurden welcomed the positive attention but called on other energy companies to step forward. "Our company wants to be on the right side of history and we are doing everything that is needed, but we cannot do it alone and as a matter of fact even the entire energy industry cannot do it on its own," he said at the meeting, per Reuters.

The Shell meeting was protested by activists in jumpsuits from the group Code Red. A spokeswoman for the group, Talissa Soto, told the board the company should be disbanded for its contributions to global warming.

"We will tax you, regulate you, split you up," Reuters reported her saying. "Today you are witnessing the last ever" Shell annual general meeting.

Those trends will continue to play out next week when Exxon Mobil and Chevron hold their annual meetings May 29 in Dallas and San Ramon, Calif., respectively.

Last month, the Securities and Exchange Commission let Exxon duck a vote on a shareholder resolution requiring it to lay out climate goals in line with the Paris climate accord, judging that forcing the company to publish those goals would be tantamount to requiring the company to comply with the international agreement (Energywire, April 3).

The New York State Common Retirement Fund and the Church of England’s investment fund, which were behind the proposal, expressed frustration with Exxon’s pushback against the planning measure and announced that they would instead support a shareholder proposal to split the two roles now filled by Darren Woods as Exxon’s CEO and board chairman.

"When the CEO serves as board chair … it raises serious questions that the board may be merely a rubber stamp instead of providing genuine oversight," New York State Comptroller Thomas DiNapoli said at the time.

"Exxon’s board’s refusal to adequately address significant shareholder concerns and properly account for climate risk in its operations, even as its competitors do so, presents a governance crisis," DiNapoli said, encouraging other investors to support the step.

That shareholder proposal has become the lead issue among a slew of climate-related measures up for a vote at Exxon’s meeting next week, said Kathy Mulvey, the climate accountability campaign director at the Union of Concerned Scientists. Other questions to be put before shareholders include a call for the board to establish a committee on climate change, and proposals that the company disclose its lobbying and political contributions.

The lobbying disclosure question jumped up in prominence after Shell published a report on the industry groups that it belongs to, under similar pressure. Last month Shell said that it would be leaving the refining trade group American Fuel & Petrochemical Manufacturers on account of "material misalignment" with the group on climate change policy.

The move left observers wondering whether higher-profile groups like the American Petroleum Institute and U.S. Chamber of Commerce, which have staked out similarly conservative positions on climate, could also come under pressure (Energywire, April 4).

Chevron initially faced an investor resolution to address emissions associated with its operations and product use but was able to avoid putting that issue to a vote. Mulvey said the company did not fight a proposal to report on its climate-related transition plan, which will be presented to voters next week but likely win limited support.

Asked about how European oil and gas companies have pulled ahead of their U.S. counterparts in responding to investor pressure, Mulvey said the state of play there is exerting a pull on companies here.

"To the extent that we’re seeing Shell and BP start to make some commitments to share owners there, I think those same share owners will be impatient if Exxon and Chevron fail to make commitments and fail to keep up," she said.

The gap is smaller when you look at what companies are doing on the ground, she added. "In that sense, BP and Shell have gotten out of the gate, but they’re not very far down the track."

A recent analysis by the International Energy Agency reflected the conflicting pressures on oil and gas companies. It portrayed the global energy industry as at a crossroads, torn by conflicting visions for global energy use over the coming decades.

Current investment by oil and gas companies in developing petroleum resources is too low to support the pace of global consumption and risks shortfalls and price spikes on the current path, the IEA report warned. And yet oil and gas investment is too high, and investment in alternatives too low, to put the world on a path to reining in climate change.

"But the bottom line is that the world is not investing enough in traditional elements of supply to maintain today’s consumption patterns, nor is it investing enough in cleaner energy technologies to change course," Birol said. "Whichever way you look, we are storing up risks for the future."

The tug of war over climate commitments comes at a time when oil and gas companies have been testing investments in alternative energy technologies like electric vehicles, wind and solar, and carbon capture and sequestration.

Earlier this year Shell bought EV charging company Greenlots, while BP recently bought Chargemaster, the largest charging network in Britain. Both companies have also invested in renewables over the years.

In a blog post yesterday, Luke Fletcher, a senior analyst with environmental advocacy and disclosure group CDP, said European oil and gas companies including BP, Shell, Eni SpA, Equinor ASA and Total SA are investing most heavily in low-carbon energy, but industrywide spending in the sector last year was 1.3% of total capital expenditure.

"Investors are putting increasing pressure on oil and gas companies, with the number of climate shareholder resolutions filed more than doubling in the last five years compared to the five years prior," Fletcher said. "Resolutions calling for companies to report on portfolio resilience and 2-degree [warming limit] analysis are gaining an increasing share of the vote."