BP swerves toward renewables in seismic departure from oil 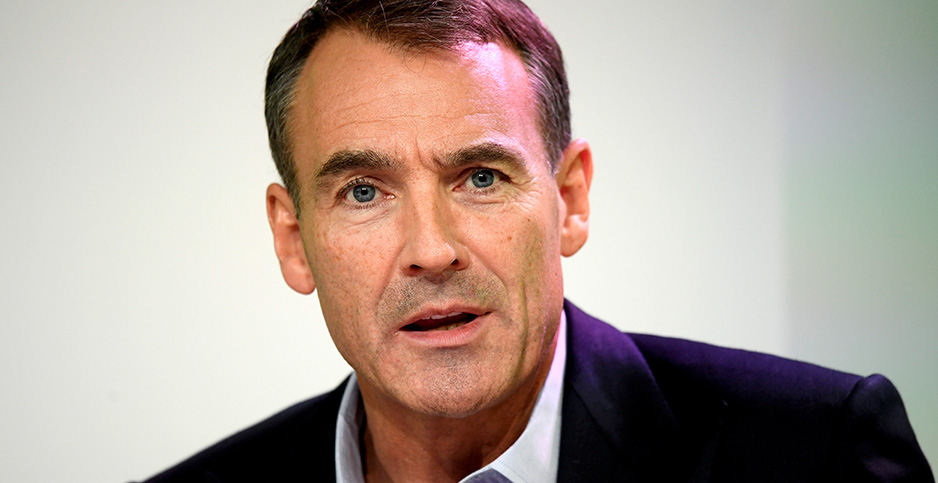 Bernard Looney, CEO of oil giant BP PLC, is pictured in London earlier this year. He said yesterday that the company's oil production will fall 40% over the next decade. Toby Melville/Reuters/Newscom

BP PLC’s plan to slash its oil production and shift rapidly into renewable power generation could prove to be a turning point for the oil industry, experts said.

The reason? BP’s groundbreaking announcement could force other companies to lower their own output scenarios and acknowledge that peak demand for oil is coming.

BP, one of the world’s most storied oil companies, said yesterday it would cut its oil and gas production 40% and increase its renewable electric power output twentyfold within the next decade. It also expects to spend a third of its capital on low-carbon energy (Greenwire, Aug. 4).

While other European oil and gas companies also have pledged to reach "net-zero" emissions by 2050, only a few have said they would cut their oil production, and none as dramatically as the London-based energy giant.

BP’s move likely would force other companies, such as Royal Dutch Shell PLC and Total SA, to explain how their oil production would fare as they move toward reducing their emissions, said Andrew Logan, senior director of oil and gas at the activist investment group Ceres. And it could pressure American oil companies such as Exxon Mobil Corp. and Chevron Corp. — which are largely banking on oil and gas production for the foreseeable future — to catch up with their peers.

"What BP is acknowledging here is the hard truth — the problem with climate change can’t be solved simply by increasing the supply of clean energy," Logan said. "We actually need to reduce the supply of carbon-intensive energy, as well."

Yesterday’s announcement caught many analysts by surprise. BP unveiled its net-zero goals in February but said it would outline how to achieve its targets in September. Analysts said the company’s decision to cut its dividend likely required BP to provide greater detail around its thinking.

"The natural question when you’re cutting the dividend is, you’re still generating billions of dollars in free cash flow, even with lower prices, so what are you doing with it?" said Alex Dewar, an analyst at the Boston Consulting Group. "That’s where it made sense to make the announcement around renewables and low-carbon investments right now."

BP’s decision to commit a third of its spending, or $5 billion to $7 billion, on renewable and low-carbon projects by 2025 was especially notable, he said.

"Making that kind of specific guidance is new and different and something to measure against whether they are delivering," Dewar said. "We’ve seen fairly general low-carbon [capital expenditure] guidance and aspirational statements from others so far. So, this is a bit more material overall."

Oil companies increasingly have two paths to pursue, said Luke Parker, director of corporate analysis at Wood Mackenzie. They can become energy companies in a broader sense — selling their oil and gas assets, investing in renewables, and providing low-carbon electricity or transportation products. Alternatively, they can carry on as major producers — aggregating oil and gas assets, driving down costs, and maintaining profit margins.

Yet the danger today is that increased concern over climate change will chip away at demand, eroding profit margins and stranding fossil fuel assets, he said.

"It is coming to everyone," Parker said. "It doesn’t matter if you’re a small [exploration and production company] or [national oil company] or U.S. tight oil player. Ultimately, the risks are the same, and that’s what investors are concerned about, and that’s why companies are taking action."

To be sure, other oil companies are preparing for a big-picture change in the energy mix. Total wrote down the value of its oil and gas assets last week and said demand for oil would start to drop in 2030. Shell’s board chairman said in July that the company expects to be "more of a power company than an oil company" (Energywire, July 8).

In a web conference with analysts, BP CEO Bernard Looney said the coronavirus pandemic forced the company to accelerate the rollout of its transition plan. COVID-19, the disease caused by the virus, has killed nearly 695,000 people around the world and pushed demand for oil down by at least 20%.

BP lost $16.8 billion in the second quarter of 2020, including accounting charges, as it wrote down the value of oil and gas assets. Other big oil companies have announced similar losses (Energywire, Aug. 3).

"The world is in a different place because of COVID-19, and so are we," Looney said.

Looney and other BP executives acknowledged that the plan comes with some caveats. BP’s emissions would still rise in the early years of the plan as it tries to gain a foothold in emerging markets. And natural gas, particularly liquefied natural gas, will remain a big part of the company’s portfolio until at least 2030, with LNG production rising from 14.9 million tons per year to 25 million tons in 2030.

BP has had miscues on renewable energy in the past, too. It tried to rebrand itself as "Beyond Petroleum" in 2001 while investing in solar power. It abandoned the plan in 2013 (Climatewire, June 4).

But Looney said the company sees the world differently from other oil companies. Exxon and Chevron, for instance, continue to expect oil demand to grow as the middle class expands in China and other emerging nations.

And BP may be able to turn a bigger profit on renewables and other new sources of energy by using its expertise in trading, hedging and other financial maneuvers, said Looney and other company executives, according to a transcript of the conference.

"So, life becomes much more complicated in this new world … and I like that because that’s how we create value," said Chief Financial Officer Murray Auchincloss.