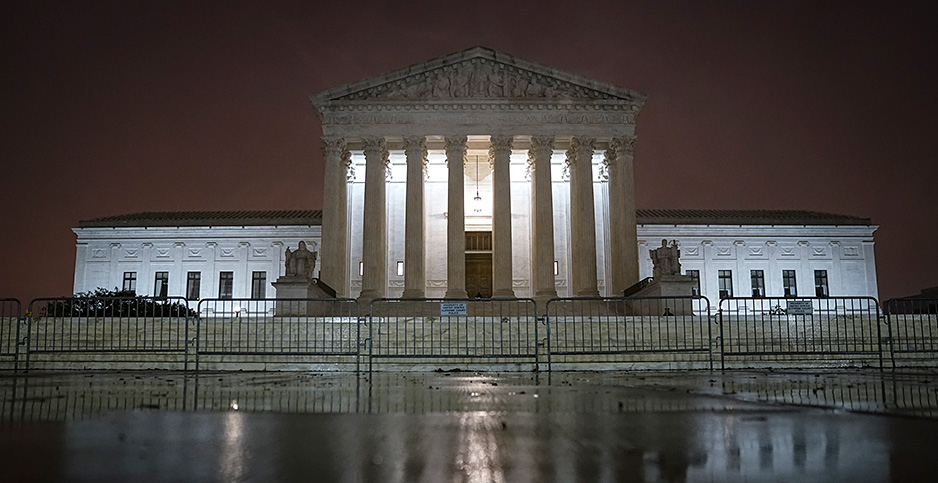 The Supreme Court ruled in favor of oil companies yesterday on a technical question that could reverberate through 20 climate liability cases. Drew Angerer/Getty Images

The next time the Supreme Court considers the fossil fuel industry’s role in causing climate change, the stakes could be much higher — both for the industry and the planet.

That was some environmental lawyers’ main takeaway from the Supreme Court’s 7-1 decision yesterday in BP PLC v. Mayor and City Council of Baltimore, which resolved a dry technical issue in Baltimore’s climate liability lawsuit against 26 oil and gas companies.

The justices didn’t decide the case on the merits, meaning they did not wade into weighty allegations by Baltimore — and more than 20 other states and municipalities — that the fossil fuel industry misled the public for decades about the dangers of global warming.

That could soon change.

"It is possible that a climate liability case will reach the Supreme Court on the merits or closer to the merits," said Marco Simons, general counsel at EarthRights International.

"And that will be one to watch," continued Simons, who is on the legal team representing three Colorado communities in their climate liability lawsuit against Exxon Mobil Corp. and Suncor Energy Inc.

Karen Sokol, a law professor at Loyola University in New Orleans, agreed with that assessment.

"I think this will eventually get to the court [on the merits], and that’s exactly what the industry wants," she said. "It just didn’t happen quite as fast as it intended."

Sokol expressed concern that the 6-3 conservative majority on the Supreme Court could take the opportunity to limit the judiciary’s role in addressing global warming.

"This decision could chip away at judicial authority to litigate issues related to the climate crisis, which is the most relevant issue right now and for the foreseeable future," she said.

"I will not express a view on a matter of public policy, especially one that is politically controversial, because that’s inconsistent with the judicial role," Barrett told Vice President Kamala Harris, then a Democratic senator for California (Climatewire, Oct. 15, 2020).

That answer, Sokol said, suggested that Barrett might see climate change as a matter best addressed by EPA or Congress, rather than the judicial branch of government.

Baltimore originally filed its climate liability lawsuit against BP, Exxon and 24 other oil companies in 2018.

The complaint asserted that the companies should help pay for Charm City’s efforts to adapt to flooding, extreme heat and other local impacts of global warming.

Since 2017, five states and more than a dozen municipalities have brought similar climate liability cases, including Massachusetts, Rhode Island, Minnesota and the District of Columbia.

When the Supreme Court said it would hear Baltimore’s case last year, it only agreed to consider the narrow procedural question of whether federal appeals courts can review the entire scope of remand orders that send such cases back to the state courts where they were first filed.

But in a bold bid, lawyers for the oil and gas industry asked the justices to save time and find that all claims related to interstate greenhouse gas emissions belong in federal court, which is seen as a more favorable venue for the industry.

In the majority opinion yesterday, Justice Neil Gorsuch agreed with industry lawyers that federal appeals courts have the authority to review the entire scope of remand orders.

But Gorsuch, another member of the court’s conservative wing, stressed that the justices weren’t accepting the industry’s invitation to decide the case on the merits.

"This case began when Baltimore’s mayor and city council sued various energy companies for promoting fossil fuels while allegedly concealing their environmental impacts," he wrote. "But the merits of that claim have nothing to do with this appeal. The only question before us is one of civil procedure."

Bob Percival, director of the University of Maryland’s environmental law program, said he thinks Gorsuch was "quite careful in making it clear that he wasn’t in any way weighing in on the merits."

Percival added: "The justices know how politically sensitive climate issues are, and I think they don’t want to weigh in on them" at the moment.

More cases on the way

Yesterday’s ruling means that the 4th U.S. Circuit Court of Appeals must take a fresh look at the remand order that sent Baltimore’s climate liability case back to the state court where it was originally filed.

In particular, the 4th Circuit must consider the fossil fuel industry’s eight arguments for why the case actually belongs in federal court.

Previously, the 4th Circuit found that it only had the authority to consider one argument: that the industry extracted oil from the ground at the direction of federal officers.

If the court rejects all eight arguments, the case could eventually make its way back to the Supreme Court, according to analysts at ClearView Energy Partners LLC.

"The case seems likely to return to the Supreme Court as whoever the Fourth Circuit sides against on remand may appeal the decision," the firm wrote in a note to clients yesterday.

Three other federal appeals courts — the 1st Circuit, the 9th Circuit and the 10th Circuit — must also review the remand orders that bumped other climate liability cases back to state benches.

"If the courts of appeals start coming out differently on this question of state common law claims about climate harms and misleading climate-related statements, that’s how cases get queued up so they’re ripe for Supreme Court review," said William Buzbee, a professor at Georgetown Law.

All eyes on Calif.

Many environmental lawyers are also keeping a close eye on climate liability lawsuits filed by the California cities of Oakland and San Francisco, which could take a different — and potentially quicker — path to the nation’s highest bench.

The California cities were some of the first municipalities to spearhead such legal challenges in 2017. Their landmark lawsuits alleged that five oil and gas companies had created an unlawful public nuisance by producing "massive amounts" of fossil fuels that caused climate impacts such as sea-level rise.

Attorneys for the oil and gas companies swiftly removed the cases to the U.S. District Court for the Northern District of California, arguing that the cities had raised questions for a federal court to resolve.

Judge William Alsup, a Clinton appointee, handed the companies a victory when he dismissed the cases in 2018, finding that claims related to interstate greenhouse gas emissions were displaced by the Clean Air Act. But on appeal, the 9th U.S. Circuit Court of Appeals reversed Alsup’s ruling and affirmed that the cases belonged before a state bench.

In January, attorneys for the oil and gas companies filed a petition asking the Supreme Court to overturn the 9th Circuit’s decision.

"The one to watch is Oakland," said Pat Parenteau, a professor at Vermont Law School.

"If that petition were granted, I would sit up and take notice," Parenteau added. "I don’t think it will be, but if it is, that would raise some more troubling issues."

The decision "addresses an important issue of federal appellate jurisdiction, and Chevron looks forward to showing in the next stage of the proceedings why this case belongs squarely in federal court," Boutrous said in an email to E&E News.

On the other side of the country, environmental lawyers are waiting to see whether New York City asks the Supreme Court to overturn the 2nd U.S. Circuit Court of Appeals’ dismissal of its climate liability case (Climatewire, April 21).